There's been a good flow of conversation around the role of 'community management' in large companies recently, with an underlying idea that although it's a tough job things will work out if the right people are involved, although Dennis Howlett recognises the danger of burn out.
Written by Oliver Marks, Contributor on Oct. 3, 2009

There's been a good flow of conversation around the role of 'community management' in large companies recently, with an underlying idea that although it's a tough job things will work out if the right people are involved, although Dennis Howlett recognises the danger of burn out.

The harsh facts though are that middle management tasked with running collaboration environments are often in an extremely exposed position politically, with great expectations from their superiors clashing with the realities of corporate cultures.

I can't fault the community roundtable's 'community maturity model' chart below conceptually ('UGC' stands for 'User Generated Content' here) as an overarching snapshot of all business types and as an aspirational model. (Although some industry types are more suited to strong hierarchical models than others, and there are wide variances in degrees of the need for secrecy, compliance and information tracking). 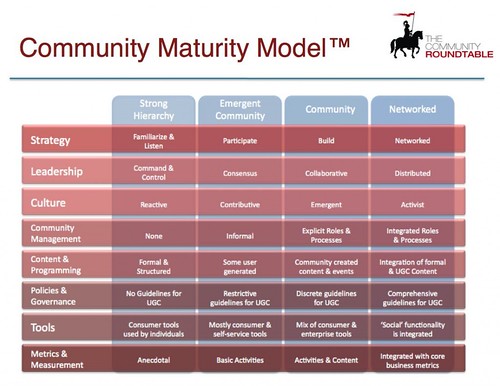 Like so much in business, to find out what things are really like will depend on who you talk to. Collaboration was a big C suite buzzword a few years ago at a high level and during a time when the economy was emerging from the last slump, as this boiler plate from a 2006 IBM white paper on 'Expanding the Innovation Horizon' demonstrates...

External collaboration is indispensable. CEOs stressed the overwhelming importance of collaborative innovation – beyond company walls. Business partners and customers were cited as top sources of innovative ideas, while research and development fell much lower in the list. However, CEOs also admitted their organizations are not collaborating nearly enough.

Converting concepts into actions have however taken interesting paths over the intervening years... Here's a typical cliched historical scenario: executive retreat produces someone tasked with setting up a collaboration environment, who hands the concept off to an underling to execute. That person, already overburdened, in turn hands off to a team with some bandwidth to execute.

The underling's underlings were never communicated the vision the execs were sold at their retreat and instead installed the easiest to get up and running wikis and other collaborative software they could find. This software is now sparsely populated with some lewd jokes and a few pictures of people's pets.

Clock ticks, budget burns, execs stop by to see how the 'adoption of a more evolved business culture' is maturing. Underlings are in full defense mode and point to all the other great work they do in their day job. Execs emerge dissatisfied and their immediate underling duly punishes his underlings. Fast forward to today with execs emerging from this years retreat full of the promise of their chosen flavor of the month.

A cynical read perhaps - you can add the kudos for any success being accepted by those north in the org chart of the people who did the actual work (see 'OBE' in this previous post).

“Constant reinvention is the central necessity at GE… We’re all just a moment away from commodity hell.” – Jeffrey Immelt, Chairman and CEO, GE 2006

Since Jeffrey Immelt said this the economy has crashed and GE's needs are greater than ever. Enterprise web 2.0 technology point solutions are everywhere in business, often used informally. Despite the 'just say no' security edicts from IT security departments tasked with protecting enterprise information and data, there is a burning need for the greater efficiencies enabled by these tools. Business value is demonstrated daily with point solutions, but the conscious creation of a broader cross enterprise social business ecosphere clearly able to remove redundancies while increasing efficiencies has long been seen as valuable.

In some ways the pendulum has swung from executive enthusiasm for the idea of collaboration to ad hoc piecemeal adoption by individual employees. We are now moving back towards more realist, mature and attainable enterprise collaboration models.

a couple of stunning statistical quotes:

"By some estimates in just a few years we will reach a point where all the information on the Internet will double every 72 hours. Double. I'm running out of metaphors to describe the magnitude of this content creation". Rovit Bhargava, (author of 'Personality Not Included')

"Each year in Africa, 40 billion (wo)man/hours are devoted to the transportation of water by human beings". John Perry Barlow

To draw parallels from these two quotes, the problems of information overload and findability are increasing exponentially, even as most businesses persist in the laborious manual transfer of information through outmoded and inefficient channels.

While talking and theorizing about how to make these processes more efficient is relatively easy, spare a thought for those donning tin helmet and flak jacket to fight in the trenches in what is often the under equipped and safety net free role of community manager. It's often a thankless task, and one in which continuous effort is needed to stay in place, let alone move forward.

Giving these realities, executive air cover for staff aligned with consensus is something I've long discussed as key here: Social Business Design strategy and tactics clearly laid out in roadmap format helps to get everyone moving in the right direction, and to know where they are heading and why.

Failure to have this clear understanding sets the community manager up as the pinata everyone loves to whack, and not for the technology shiny objects that might fall out...