Third in the sequence of Linux netbook desktops I am going to compare is Jolicloud. Doing this comparison might be a bit unfair right now, because the next release of Jolicloud, 1.
Written by J.A. Watson on Nov. 6, 2010

Third in the sequence of Linux netbook desktops I am going to compare is Jolicloud. Doing this comparison might be a bit unfair right now, because the next release of Jolicloud, 1.1, is due out literally "any day now", there have been several posts about it in The Jolicloud Blog. But I have had Jolicloud 1.0 installed for some time now, and I think it stands up to the comparison with the others pretty well, so I'm going ahead with it. Besides, it's easy to get into a never-ending wait cycle with Linux distributions, because there is always a new release of something or another coming "real soon now". 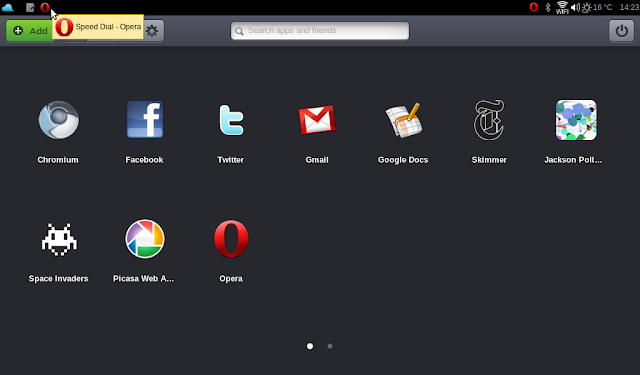 The top Panel (at the very top) is nearly identical to the Ubuntu Netbook Remix top Panel. Icons on the left, indicators on the right, and the center is where the title bar for a running application will be placed. Everything which I expect to work in that panel, does work. I was able to change the time to 24-hour format and add my location for weather display; the WiFi and Bluetooth icons work the way I expect them to; when I have multiple applications running, each of them adds an icon at the left end of the Panel, and I can select between them by clicking those icons. Nice.

The addition of a "second" panel at the top makes me a bit nervous, just because of the amount of space that it takes. Not to worry, though, it disappears when you start an application, as will be shown below. That larger panel provides the important controls for the Jolicloud desktop. First on the left side is a button to Add apps, which brings up this screen: 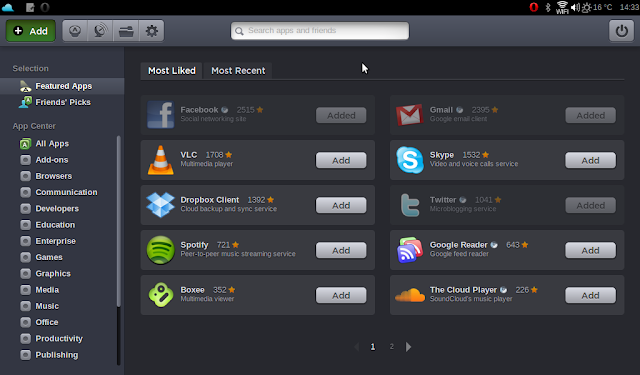 There are a couple of interesting ideas here. First, as you would expect (or hope), the available applications are grouped into general categories. However, there is also the "Most Liked" and "Most Recent" categories, which show you what applications have been most popular with other Jolicloud users overall, and in the immediate past. I like this idea, it could provide an interesting way to discover new applications I you have never known about before. I have used the Add function to install the Opera browser and Picasa Web Albums, and both of the downloaded and installed quickly and easily.

Next on the large Panel are a group of buttons which let you select your desktop display between the launcher, as shown above, or a "Social Networking" desktop where you can follow and interact with friends and favorite feeds, or a "File Browser" where you can access files and folders on your local system, on removable media or on the web, or finally a "My Jolicloud" desktop, where you can manage your Jolicloud account and various aspects of your netbook itself. I just have a couple of comments about these different desktops - the File view starts out as a special desktop, and I was afraid it would have the same drag-and-drop problem as Unity, but as soon as you select any folder or removable media, it starts a normal File Browser in its own window, from which you can perform all of the normal operations. The My Jolicloud desktop seems to me to be where they put everything else that didn't have a home. In particular, go there to find "Legacy Apps", which are common utilities that experienced die-hard Linux users insist on having: 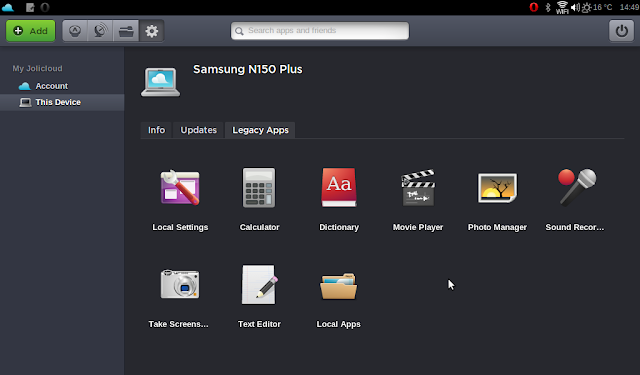 Go one step further, to "Local Apps", and you find pretty much everything that is installed on the system, pretty much the same as the "Applications" button on Unity, or the "All Programs" menu on Linux Mint. 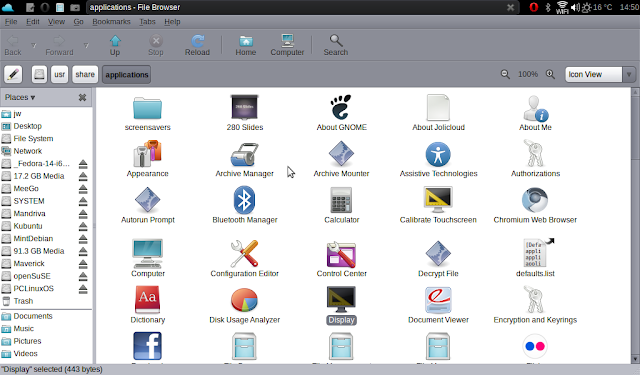 Ok, enough about the basic desktop, I got a bit distracted and carried away there... So, from the basic launcher desktop, click on the Chromium icon and you get this: 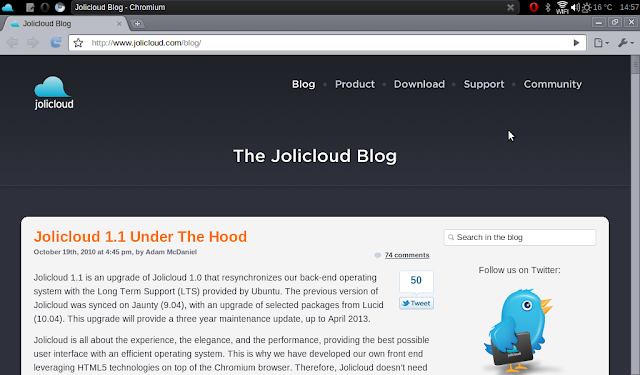 That's pretty good! It started full-screen, the title bar is integrated into the top Panel, it added an icon to the left side of the Panel that I can use to iconify/open it - pretty much what I expect from an application on a netbook. Now, Chromium is not my browser of choice, but as I mentioned I have installed Opera from the "Add Apps" function, and it works the same way. Good stuff.

There are other icons on the default desktop that I can't comment directly about, because I don't use them - Facebook, Twitter, Gmail and such. I can only say that they work quickly and in the same way as already shown for Chromium. Jolicloud is a very social-networking oriented system, and they are putting a lot of effort into making their users feel like a real community. I have the impression that Jolicloud is a good compromise between "traditional" Linux systems and "Social Networking" as it is done in MeeGo (comparison coming soon).

Ok, one last thing, to illustrate a couple of points. I knocked Ubuntu Unity for inconsistency because the Cheese program didn't start up full-screen. So the obvious question is, how does Jolicloud do with the "Cheese Test"? Well, first I found that Cheese wasn't installed - it's not on the default desktop, not in the "Legacy Apps", and not even in the "Local Apps". So I went to "Add", but I couldn't find it easily in there either - honestly, paging through screen after screen of apps looking for something specific is not my idea of a good time, and I wasn't having much luck guessing the category it might be in. Then I realized that I could type "Cheese" in the Jolicloud search bar, and it came right back and offered to install the Cheese program for me. I let it do that, which took about a minute, and then started Cheese from the (new) desktop icon. It looked like this: 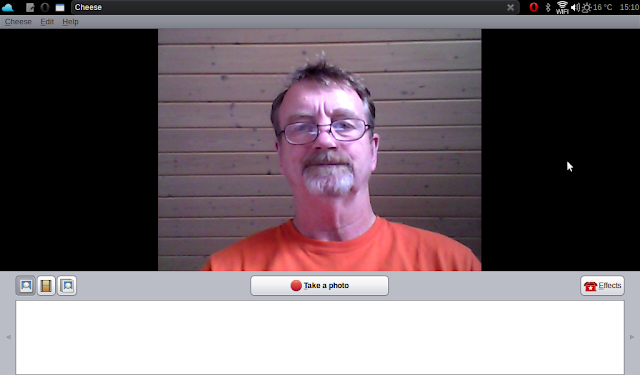 In summary I would say that Jolicloud is a very nice netbook operating system, I like it considerably more than Ubuntu Unity. It it likely to get even better with the upcoming 1.1 release. I could easily recommend it to others, and in fact I may do exactly that for those who are currently running Ubuntu Netbook Edition pre-10.10 release, and who want to upgrade without changing to Ubuntu Unity.