In this final part of the netbook desktop comparison, I will look at Windows 7 Starter, which is what came preloaded on my Samsung N150 Plus. I have mixed feelings about even including it in the comparison, because I honestly don't consider it to be a netbook operating system, but I finally decided that the series would not be complete if I omitted it.
Written by J.A. Watson on Nov. 11, 2010

In this final part of the netbook desktop comparison, I will look at Windows 7 Starter, which is what came preloaded on my Samsung N150 Plus. I have mixed feelings about even including it in the comparison, because I honestly don't consider it to be a netbook operating system, but I finally decided that the series would not be complete if I omitted it. I think the problem is one of approach to creating the operating system and desktop. In the Linux world, there are several groups who are really concentrating on trying to adapt to the netbook format, advantages and limitations, and then to produce the best operating system and desktop possible for that. In the Microsoft world, after getting literally and completely kicked out of the desktop market when they tried to offer Vistaster (my first HP 2133 came preloaded with Vista Home Premium, and believe me it was a totally useless disaster), Microsoft fell back to (grudgingly) offering Windows XP on netbooks, while they "prepared" a special Windows 7 version for netbooks. Therein lies the problem - they didn't actually make any changes or adjustments specifically to improve or enhance Windows on the netbook, all they did was try to figure out how much of it they could rip out or disable, and still end up with something that they could sell on netbooks and get people to use for at least long enough that they would then realize that to get a usable computer they would have to "Upgrade" to one of the "full" Windows versions. In fact, they initially went too far in crippling Windows on netbooks with their ridiculously arbitrary "three application limit, and after a massive outcry from users, analysts and OEMs who were supposed to try to sell netbooks with that limitation, they finally backed down and removed it. There are, of course, plenty of other restrictions left in Windows 7 Starter. There is an article in Microsoft Answers which contains a table showing the differences between the various versions of Windows 7.

The basic Windows 7 Starter desktop is as shown below. This particular screen shot is taken from my Samsung, and because I had to use it during my recent business travel, I have already cleaned it up considerably from its out-of-the-box state. As has been mentioned many times and in many places, another of the very bad things about Windows is the amount of garbage add-ons that come preloaded on it. This is particularly bad with netbooks, because they not only slow the netbook to something less than a crawl, but they also cover the majority of the desktop with multiple icons for each package. The first time I turned on the Samsung it literally took TWO HOURS just to get through all of the startup and configuration garbage before I could start uninstalling all the cruft. That uninstallation, and the innumerable reboots that it required, took several more hours. Once I had finished all of that, I was left with this reasonably clean desktop. 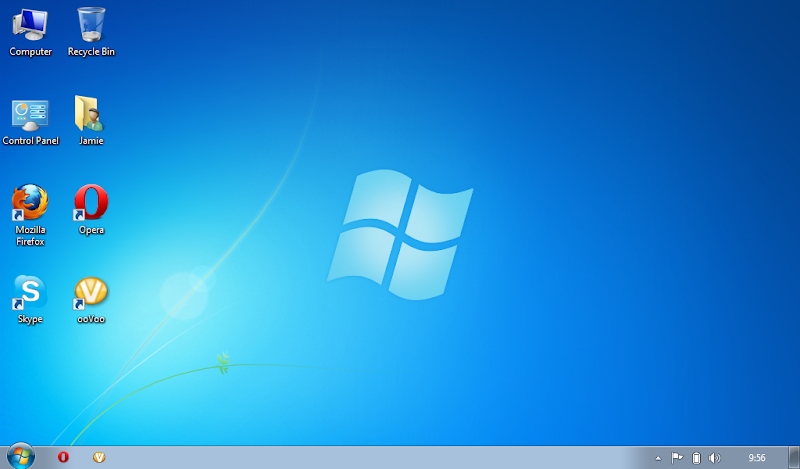 Of course, that desktop looks familiar to just about anyone who has ever used Windows. There is nothing special about it, no difference in icons, menus or layout for the limited netbook display. The wallpaper is not particularly nice, so one of the first things I wanted to do was change that. Guess what? That is one of the "limitations" of Windows 7 Starter, you can't change the wallpaper. Now, what is the reason for that? It seems like a very petty restriction to me, but I suppose that we have come to expect pettiness from Microsoft. Whatever the reason, get used to the wallpaper because you are stuck with it.

The task bar spans the bottom of the screen, as usual, and it can at least be set to auto-hide so that you can recover that last bit of useable screen space. Everything there seems to work the same as on "normal" versions of Windows, with the system tray and notification area at the right end, tabs and icons for running applications in the center, and the "Orb" (Start button) on the left. Icon sizes can be changed by right-clicking on the background, then under the View item you find Large/Medium/Small icons. The full menus, exactly as with "normal" windows, are accessed by clicking the Start button.

When you start an application, it will remember the maximize/unmaximize state it was in the last time it was run - so if you typically run things full-screen, they will start that way the next time you use them. I think this might be the one area where I prefer the behavior of Windows to the various Linux netbook systems I have tried so far. I find the unconditional starting of applications in full-screen mode to be a bit tedious for my own use. Yes, I know that there are various ways that I can change that on the Linux desktops, but for these comparisons I am trying to stay with the default configuration and behavior. (Besides, I had to find something nice to say about Win7S.) So, when I start Opera, and I have most recently been using it unmaximized, it looks like this. 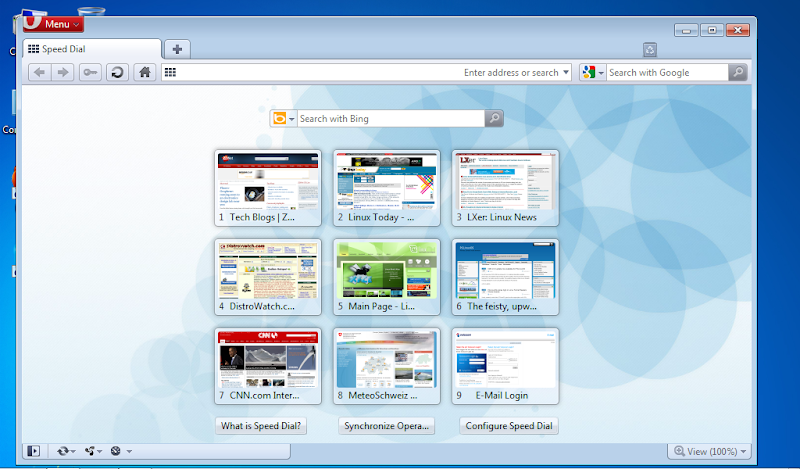 The control and behavior of this application window is exactly what you would expect from Windows. You can minimize, maximize and unmaximize it with the window controls at the top right corner of the window, and when it is minimized there is an icon for it on the taskbar. If you don't want to have to go through the Start button menus to get to your commonly used applications, you can right-click on them in the menu and then choose "Pin to Taskbar", which produces something basically the same as the Windows XP "Quick Start" area on the taskbar, or you can choose "Pin to Start Menu", which will keep that item at the top of the first Start Menu list, so you don't have to slog through the sub-menus to find it. For most, but strangely not all, applications you can also choose "Send to Desktop (create shortcut)" to put the item on your desktop. In the initial screen shot above, I have pinned Opera and ooVoo to the taskbar and created desktop shortcuts for them. 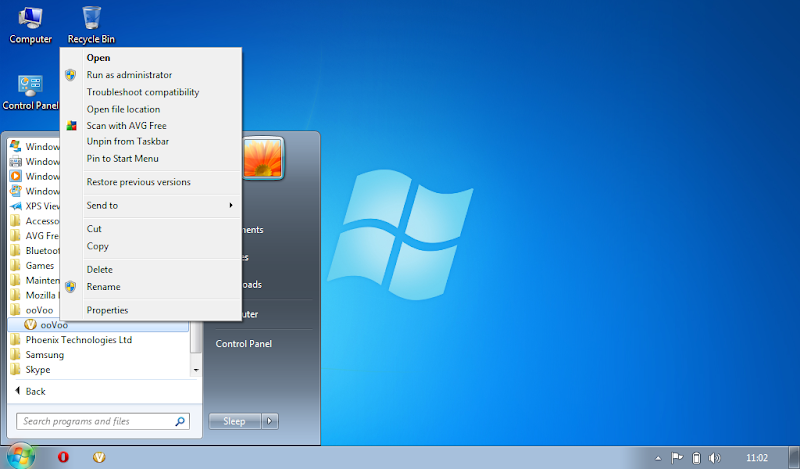 When you open multiple applications, you can control their size and stacking using the usual controls and commands as for any other version of Windows. There will also be icons on the taskbar for open windows, with some important changes from previous versions of Windows. First, the "Quick Start" area and the active icons have been merged in Windows 7, so if you have an application pinned to the taskbar, as I have Opera, then when you start the application Windows will not add a separate icon for it, the "pinned" icon will then apply to that running application. If you have multiple copies of one application running, there will still be a single icon for them on the taskbar. I think it is supposed to be shown as "stacked" icons when there are multiple copies, but that stacking is difficult to distinguish on normal-sized laptop diskplays, and basically impossible to see on netbook displays. When you click on the stacked icons, it will pop up a list of the active copies and you can choose which one you want to access. Of course, when you start a non-pinnned application a new icon will be created for it on the taskbar, and if you start multiple copies of such an application they too will be stacked on the icon. 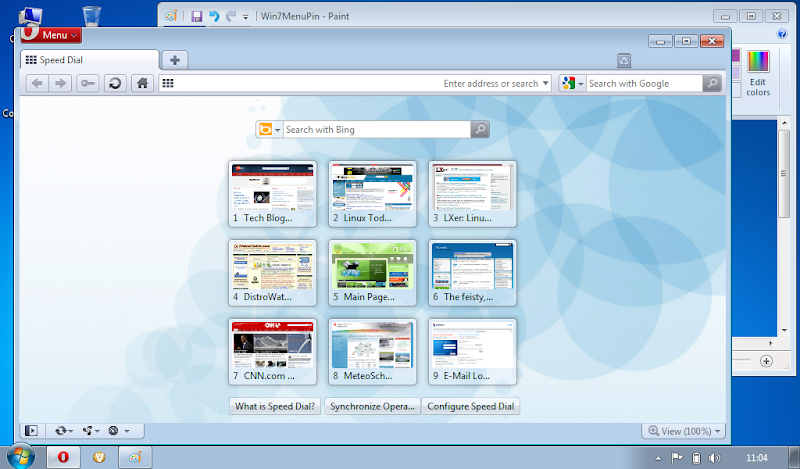 In conclusion, I want to add a couple of comments about performance. On my Samsung N150, which is a pretty typical second-generation Atom (450) netbook with 1 GB of memory, Windows 7 Starter takes an absolute minimum of 90 seconds to boot. This is after having removed all of the cruft that I could, and doing anything and everything I could think of to speed it up. That compares to about 15 seconds to boot MeeGo, and about 30-45 seconds to boot the other Linux netbook versions I have tested. Shutdown is comparably slow, taking about 20-30 seconds compared to the Linux systems taking about 5-10 seconds. I think that Microsoft's suggestion is that "Sleep" is supposed to be the "new Shutdown/Startup", but when I tried to use that on the Samsung all it did was blank the screen, it never actually succeeded in putting the system to sleep. All of the Linux netbook systems that I have installed on the Samsung are able to use sleep mode, typically taking 5-10 seconds to go to sleep and 10-15 seconds to wake up.

I would summarize by saying that unlike Vistaster, Windows 7 Starter actually does work on netbook computers, if you are willing to accept the limitations imposed by Microsoft and the relatively poor performance it gives. I am forced to use in for a few specific tasks when I am away from my office, and I have found it to be (barely) adequate for that. However, don't expect it to be cusomized or optimized in any way for the netbook environment, it is truly nothing more than "standard" Windows 7 shoe-horned into a small system. It really doesn't stack up very well in comparison with any of the Linux netbook desktops I have looked at, either in terms of design or functionality.