Europeans were a bit shocked to find themselves being charged almost three times as much as their American counterparts for Google's Chromecast when it appeared on Amazon earlier this year, but that hasn't stopped more than 900 people laying down the same amount for a screencasting device that takes aim at pesky HDMI cables and does a few things the Chromecast can't.

After six days, the Danish developers have raised more than $100,000 on crowdfunding site Indigogo to bring to life a plan to produce an initial batch of 2,000 of their wireless screencasting device, AirTame.

The AirTame's dual wi-fi chip device means users can display their PC and two-channel stereo on a larger screen such as a TV, without the need for any HDMI cables. And, if AirTame's software is installed on multiple PCs, a user can screencast from one machine to multiple PCs on the same network.

The device's setup is very similar to Google's Chromecast, which has a USB point for data transfer and a second USB cable for power. While AirTame compares their product to Chromecast, Apple TV and Miracast-based wireless screencasting devices, there are a few differences that might make it a more natural fit in the office rather than for showing off web content on the big screen.

"We developed our own protocol that includes some features that others such as Miracast don't have," Attila Sukosd, technical co-founder of AirTame, told ZDNet.

"These include sending the data from the computer, so instead of just the image from the screen, you send some data as well like joystick events, key presses, mouse and so on. We might have some USB features coming out as well [where peripherals could be plugged directly into the dongle]. And we have the moveable display angle and some cloud computing aspects," such as using it as part of a virtual desktop infrastructure.

As it is, the prototype is able to transmit high definition video at 1080p using a H.264 encoder and can transmit at a bit rate of between 5Mbps and 30Mbps, according to AirTame. For audio, it's using the Opus codec.

A gap the product currently has as a potential rival to Chromecast is its lack of support for screencasting from iOS and Android tablets. 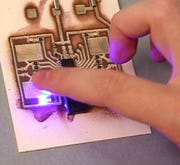 Revolutionary 3D printer cuts time to manufacture printed circuit boards from weeks to an hour – and even prints on paper.

"Streaming from tablets to TVs, we have a problem because we need to access certain hardware functions which the OS doesn't allow us to do. You need special permission from Apple or Google to do that. You have to jailbreak the device for it to work," AirTame co-founder Jonas Gyalokay said, adding that the company hopes to find a solution to this issue down the track.

But AirTame also hopes to tackle a limitation of Chromecast that prevents it from working on wi-fi networks where device to device communication is disabled, such as school networks and corporate environments.

AirTame gets around this issue by having designed the device to become an access point itself rather than rely on solely on the wi-fi network for device to device communications.

"Basically, when you first set up the device, you connect it to your online profile, and from there you can control the device. So when you first plug in your AirTame it will search for saved wi-fi networks and if it finds one it will connect otherwise it creates an access point."

To date, funds raised so far mean AirTame has passed the halfway point of its $160,000 campaign target. If all goes to plan, the developers plan to ship AirTame by June next year, with a retail price of around $89.