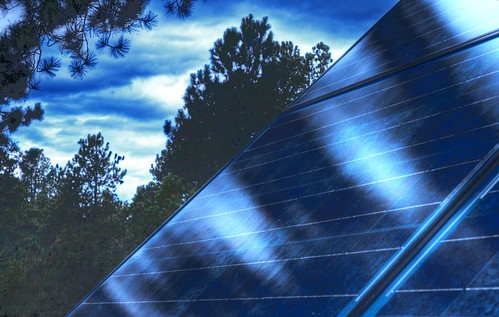 The reflective glint of dark solar panels is pretty, almost water-like. If I were wandering thirstily near any one of the world's desert solar facilities, perhaps I'd be convinced of water in the distance. But I'd surely detect the false oasis before I dove in.

An insect? Not so much.

Say what you will about insect intelligence, but bugs see the world differently than we do (and often with a greater number of eyes). Attracted to polarized light for food or breeding purposes, many aquatic insects lay their eggs on or are hypnotized to death by solar's shiny surfaces.

Robertson, publishing his work in Conservation Biology, worries that the accidental bug zappings could have cascading effects throughout an ecosystem.

At risk are populations of hydrophilic insects—mayflies, caddis flies, beetles, stoneflies—and whatever other animals rely on them for food (birds, frogs, fish, etc.).

It's like these organisms become dazzled to death. It's like going to the most amazing 3D movie you've ever seen and you can't leave. They just fly and fly and fly over these surfaces, and they get exhausted and die.

Of course, solar panels aren't the only source of polarized light pollution. The mirrored surfaces of cars, buildings, windows, and even asphalt fry their share of insect eggs. (Not to mention the millions of birds that perish after striking windows each year.)

In any case, Robertson suggests diminishing solar's threat to insects by adding white grids or strips, already used in some systems. With limited loss to solar's efficiency, he says the bit of white can disrupt the illusion of pools of welcoming water and reduce insect attraction by 10 to 26-fold.

In the photo to the right, damage goes both ways. As the beetle lays eggs on the surface of this red car, the eggs' acidic coating will corrode the vehicle's paint.