In the second part of his interview, Defence CIO Greg Farr talks about outsourcing, the skills crisis and reveals his most urgent IT priority.
Written by Munir Kotadia on May 4, 2008 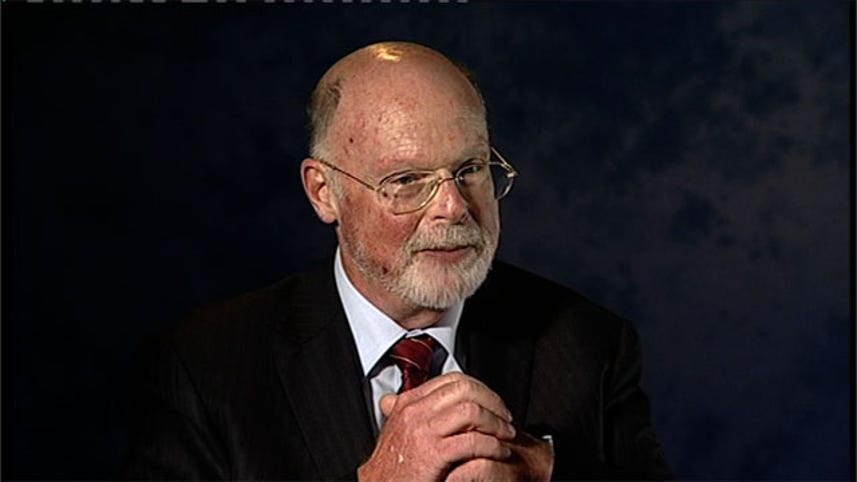 In the second part of his interview, Defence CIO Greg Farr talks about outsourcing, the skills crisis and reveals his most urgent IT priority.

How do you manage outsoucing contracts?

Farr: Generally speaking, in outsourcing, I think, we need to step back in Defence, and have a look at how we source our capability. And I've actually kicked off a project now to do that. We have a lot of contracts with individual people. I think, there's about 580 contracts, within my group, on foot at the one time. I think, that means we're spending an awful lot of time looking internally and managing contracts, instead of looking externally on what the business areas in Defence want for us.

And I think, there has to be some sort of rationalisation of that. What that is, I don't know. But, I'm looking to have a project completed within the next six months, where we'll be able to formalise what our outsourcing strategy is. We'll be able to do that within Defence, but we'll also be able to go out to the industry and say, "This is how we want to source capability," because one of the things that we have to do is we have to get our product to market more quickly.

We have to be more responsive to the needs of Defence. The time to market for some of the things we do is just too slow. And to do that, we need to have partnerships and alliances with people in the IT industry that can move at the speed that we need to move at. And I'm just not seeing that at the moment.

Does Defence use Web 2.0 technologies?

Farr: We're just tipping our toe in the water on that one. In a big organisation, some of the Web 2.0 type technologies are hard to govern. It can't be just open. Having said that, increasingly, the collaboration across all the areas of Defence — and between ourselves and our allies — is an increasingly important part. Web 2.0 technologies, I think, have got a role to play there.

And I've actually raised it, a couple of times now, with people within Defence, I think, we need to start looking at the potential uses here. And I don't think we need to get too carried away with it. I think, we just need to try some of these things.

What kinds of things?

Farr: Well, for example, I mentioned that we want to roll out an IT strategy, just within the CIO Group, we want people to be able to contribute to that. So, we just set up a collaborative space so that, as thoughts come out, it gets posted to that, people can give their views in it, and we'll use that as part of the formal formulation of the strategy. I guess, if that works, we can actually start looking more broadly across various other areas just collaborative spaces.

We don't use things in our Web site. We don't use RSS feeds. And I would have thought that that would have been something that we could use quite readily. It's not rocket science.

Some technologies can be very useful, actually.

Farr: And once people started to see some of those things, I think, they go, "Oh. Now I'm getting it, and I really want that." So, that goes slowly, and then just start bringing it in like that, and start within CIO Group.

Is Defence suffering from the skills shortage?

Farr: At the moment, I'm not hearing from either of them that there is an enormous skills shortage in the market that they're looking at. I'm not speaking for Unisys, of course, but one of the advantages they have is that they're in the regions where outside of Canberra the skills shortage, I think, is probably a little less — I think it's very much concentrated in Canberra.

That notwithstanding, the skills shortage is a major issue. And, in fact, I was talking to our HR people yesterday about that issue. It's not only the skills shortage at the moment that concerns me; it's the pipeline that is coming in ... I think, it's only going to get worse.

So, that's a few things that we're sort of thinking about now and pushing. I'd like to also have better relationships, or closer relationships, with some of the academic institutions, where we can actually, whether it's work experience or give students part time jobs while they're studying and allowing them flexibility to go back to lectures and things like that. We have to look a bit more innovatively, I think, than we have in the past.

But last year, I think, we were looking for 20 or something graduates, and we didn't get them.

The graduate market has really closed up. When I was at my previous job in Tax, I made the comment to the people there, "Good quality graduates, we'll take as many as we can get."

Now, I'm not sure that I can do that here, but I'd like to get as many as I could. And if I can do what I have done in the past, which is substitute contractors or consultants for graduates and grow them through the organisation, that's certainly my preference. And I'd really like to be able to do that: grow them through. You've got a good chance of retaining them when they see what an interesting place it is to work.

But, if we get the people coming from university and the relatively new graduates, the main thing for most of them is that they have interesting jobs, they get variety in their jobs, and they learn. We have to put an environment in place where they do have interesting jobs, where they do get to see lots of different things, and where they have the ability to enhance their skills, because that's what they're really interested in.

How do you measure your success as CIO?

And to do that, we need to be able to have a very stable and robust platform. We need to be able to support, and not just directly support military operations, but Defence itself is a big system, all designed now to support military operations so, right down to HR systems, a critical part of war fighting now. So, all of those things have to be stable.

So, first thing, we have to be able to do that, but we have to do it in such a way that, as technology changes, we make the full use of that technology. We position ourselves so that we can take the technology that is being developed and implemented, and we can put it into place in such a way that it supports business. And we have to do it with reduced cost — probably no different to any other CIO, really. But, they're the things that I'm really concentrating on.

What is your biggest IT priority?

Farr: When I talk to people within Defence, I say, "Well, where do you think we're going strategically with the IT platform? What do you think is the strategy?"

They say, "Oh, no, it's too hard to get your password changed." All right, so when we're down in those irritant levels, or where there's some instability that it takes a while if something breaks to actually get it fixed, we're not seen as being responsive enough.

And where we're not being seen as responsive enough, people will quickly criticise that part of the performance. And there's just no recognition of all the good things that happen as well. We actually need to get that sorted out. We need to have a stable platform that people can rely on. And that is my top priority at the moment.

I've gone out to senior managers within Defence and said, "What's your top ten irritants for the IT systems?" We've put them together; I've put a senior person on there to knock them over in quick time and be very visible, that, "Yes, we listen. Yes, we know that that's causing you pain. Yes, we'll fix it up."

And by doing that, hopefully, we'll get that discussion going between ourselves and the business areas, as well as fixing the irritants. But then, we'll also be able to progress that discussion into the more strategic level of where we want to take the IT platform over the next few years.

And how long do you expect it take for the irritants to be ironed out?

Farr: The first ten I want done by 30 June. Now, that might not be realistic in some cases, but it is the highest priority stuff. It means, we've got to stop doing other things to sort out those irritants. That what I want to happen.

What happens after that, generally, is you get the next 10. [laughs] And ultimately, you get to a point where people in reality are happy and they sort of lose that heat. At the moment, the reaction has been very, very positive from the business areas. "If you can fix these up, this is what we want done." And that engagement has been great.

But, I want them done quickly. People were focusing on the high level, the major projects, all of which are critical. And then there was no resources left over to do some of the more minor work, the minor tasks that need to be done. I guess what I've done is turned that 'round a little bit and said, "Those are the things that have to be sorted out. Let's get them right and then we'll move on to the others."

How many applications does Defence run?

Farr: That I've been able to find? About 1,300, which is not an enormous number for an organisation of this size. There has been quite a bit of work done actually in applications roadmap to retire certain applications. In this suite of products, we're going to use these products, and we'll retire all the others.

I suspect, there's a lot more than that. Yes, server consolidation, but also desktop refresh is a problem. If you don't know which applications you're running and you change your operating system or something like that, or half of them don't work, and you get people kicking the door down of the service desk. And you say, "Well, sorry. We didn't know that."

Is that a challenge that you're expecting to face — do you plan on rolling out Vista at all, at any time?

Farr: Not any time soon. For us, it's not one of the priority things. But, when we do change to, say, Vista or whatever yes, it'll be an issue for us.