Salesforce exhibit marketing & presentation genius on a par with Apple to roll out new products across the global internet; pragmatic challenges in planning and realizing your needs are sometimes underestimated during roll out after digesting the dream
Written by Oliver Marks on Sept. 1, 2011 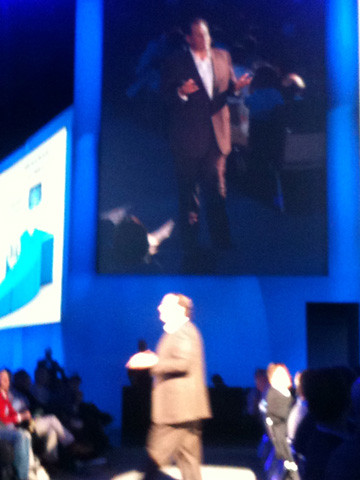 The standard of Salesforce's marketing and presentation efforts are outstanding across all media: two days into the San Francisco edition of Dreamforce (the Benioff world tour moves to London next, then Tokyo) the quality of experiences across what used to be called multimedia in a previous era is unsurpassed in my experience. Multimedia was a last century technology wave which leveraged the promise of 630 megabyte CD ROM disk media; like many waves it peaked before the supporting hardware. In this case CD rom drives in PC's had a hard time playing the audio, video and imagery consistently, if at all. Web 2.0 is also ancient now but this Dreamforce is the first conference I've attended where wifi and mobile reception weren't at some point party poopers and realized a truly invisible high speed internet experience.

The projected sense of scale is critically important for Salesforce who do a great job of looking rude with health as they begin to seriously encroach outside their core expertise origins of internet hosted software to track sales pipelines and numbers. Sales software is how most of a rapidly changing world sees Salesforce - if at all - but that is starting to shift in the areas where it really matters for their value to be understood, which is in enterprise circles.

The CEO Mark Benioff driven charisma offensive has matured significantly this year in terms of products and the announcements came thick and fast. The overall presentation style is an amalgamation of Steve Jobs style personal presentation from Benioff presented at a scale superficially approaching Oracle OpenWorld size with production values approaching Apple's premium product consumer seductions. Tom Foremski suggests Benioff is a Larry Ellison mini me in personality. The sometimes oil meets water experience for those attempting culture change inside fiefdom divided enterprises comes later - Dreamforce is all about selling the vision.

Businesses of all sizes all over the world are struggling to apply a contextual lenses in relation to their technology needs to all these fuzzy-to-them cloud concepts. Salesforce are doing a terrific job of throwing into sharp focus the business value and opportunities their green fields expansion across virgin pure internet territory. Incumbents are hogtied by legacy support and commitments to keeping customers happy in a status quo they sold them years ago. Salesforce are brilliantly capitalizing on a rapidly changing world to make their premium solutions accessible. My iPhone snap above of Mark Benioff walking the vast floor of the Moscone Center as he spoke on Wednesday is likely the only fuzzy Salesforce image you'll see this week - the dream is presented in crisp high definition video, easy to understand graphic imagery with thumping high quality audio between announcements.

As I wrote earlier this year, today's western world enterprise can be a pretty dismal place...

...An unvarnished picture of the enterprise of 2011... where things typically move at a glacial pace. You start by getting your door badge scrutinized by security before you’re allowed access to an old Windows XP machine in your stall in the cube farm - followed by your email address and logins to enterprise systems on your several versions back but security compliant Internet Explorer browser.

The physical environment is typically fluorescent tube lighting, and the sound track is often the rustle of printers producing paper output of Powerpoint decks and documents to be discussed and documented with paper and pen in meetings. Daylight and/or an office are desirable perks. Facebook is known as ‘Social Notworking’ and is an opportunity to catch up with friends and family on your smartphone…unless you work in marketing, in which case you’re trying to figure out how to get maximum prospect reach from ‘free’ online social media.

I also regularly allude to the document and mail driven paradigms the first generations of digital technology emulated here. The realities of mobile and the new generation of touch interfaced connected devices are driving change in an ailing economy with consumer device development completely outstripping business hardware. Research In Motion (RIM) Blackberry devices are ubiquitous in business today as email and telephony devices, yet the company is widely considered to be on life support as the winds of change blow, despite being a 20 billion dollar in FY11 entity. The big question, assuming RIM don't gather their wits and begin to innovate to get ahead of the iphone and ipad consumer devices which have started to seriously compete with them, is what happens next.

Apple have no interest in the enterprise market - you could make a pretty good case for the idea that Saleforce is stepping up and building out the back end support for Apples devices - yet 'crackberries' still have a huge devoted following. Mark Benioff floated the idea that after the 'Arab Spring' uprisings there will be a 'cloud spring' in enterprises with some C suites unseated by popular revolt, which somehow reminded me of the brilliant 'I want my MTV' 80's US advertising campaign created by George Lois.

Salesforce are currently a 1.6 billion in US$ revenue entity which is growing rapidly - they plan to hire 1000 new employees in the coming months and are building a huge new campus in San Francisco. They've come a long way from sales automation software and are now openly challenging enterprise resource planning (ERP) vendors including Benioff's alma mater Oracle, who will be putting on their gargantuan Open World event in San Francisco in 30 days time. (Oracle are a 45 billion US$ in 2011 revenue behemoth).

Like the RIM balancing act, the question is what happens next? If you're a prospect or customer of any of these companies these worries, along with Microsoft's apparent lack of innovation momentum across mobile and the post document and mail society are likely to keep you up at night. These could turn out to be career killing - or boosting - choices. There are any number of online pundits spinning up a vision of what will happen next with colorful diagrams and predictions but for business users the only relevancy is understanding their contexts and finding ways to realize their needs against costs incurred to achieve goals.

Salesforce have a lot of mojo and momentum going for them right now: I'm assuming their showcasing of the 'Black Eyed Peas' in their marketing is to desired demographics like the focus group tested Bill Clinton camping trip back in 1996, but some of the live duck calling CEO's and Hawaiian singing (or was that melodic Heroku?) have a decidedly wacky aspect.

The pre event ramp was a text book way to mobilize participation, the live event feels huge but extremely well organized and presented and the online feed was rock solid every time I participated through those mediums (there was 1.8 million online viewers of the live feed today according to the stats beneath the last keynote, a Benioff chat with Google's Eric Schmidt which had around 35k live at end of day). The online dialog through Twitter, Chatter or Facebook has been stellar, and over forty five thousand people were attending on site.

Huge opportunities and value at a global scale are at stake, and Salesforce are doing a brilliant marketing job in messaging their vision, platform and sheer vitality. As the buzzword 'social' suggests though, business network enabling online applications run into all types of personalities, agendas and issues. The Monday morning 9am meetings where the dream is fleshed out and focused into tangible strategy and actionable plan can in some cases be a cold shower rude awakening for cultures which underestimate the change required, or who think achieving benefits is trivial to realize.