Lots of people have been waiting anxiously for the release of Linux Mint 11. Not only loyal Mint users, who of course are anxious for every new release, but this time around also a lot of previously loyal Ubuntu users who are unhappy with Ubuntu Unity and want their Gnome desktops back.
Written by J.A. Watson, Contributor on May 26, 2011

Lots of people have been waiting anxiously for the release of Linux Mint 11. Not only loyal Mint users, who of course are anxious for every new release, but this time around also a lot of previously loyal Ubuntu users who are unhappy with Ubuntu Unity and want their Gnome desktops back. Probably also a fair number of users from other Gnome-based distributions, who have been or soon will be presented with a Gnome 3 desktop. For all of those people and more, the wait has ended - the final release of Linux Mint 11 (Katya) was made available for download this morning.

Of course, Mint 11 is still based on the latest Ubuntu release - 11.04 in this case - but it has its own changes and customization on top of that. In this case, the big change is that Mint has stayed with a Gnome 2.32 desktop. This is not the first time that Mint has stayed away from a controversial Ubuntu change; for example, they never adopted the moving the window controls to the left side of the title bar. But the bulk of Linux Mint 11 is still derived from Ubuntu.

Enough preamble, let's get down to the business of installing and examining Linux Mint 11. The Linux Mint Download page contains a variety of ISO images. Most people will want the "full-featured DVD version", the only problem is as the name implies, it doesn't fit on a CD. If you are still burning to discs, you'll have to use a DVD; if you are installing from a USB flash drive, a 1GB drive will still be enough. There is an alternative version which fits on a CD, and has some extra bits removed which you could then install yourself from the Internet. There is also an OEM version, which also fits on a CD, but I doubt that version would be of interest to readers here.

Ok, be careful about the first little bit of confusion after you download the ISO image. If you are using USB Flash installation, because Mint 11 is still tracking Ubuntu the image has to be copied to the flash drive using the Mint (or Ubuntu) Startup Disk Creator utility. There is another Linux Mint branch which is derived directly from Debian GNU/Linux, and the USB flash images for that distribution are created using unetbootin, but that will not work for the Mint 11 (Ubuntu) distribution. 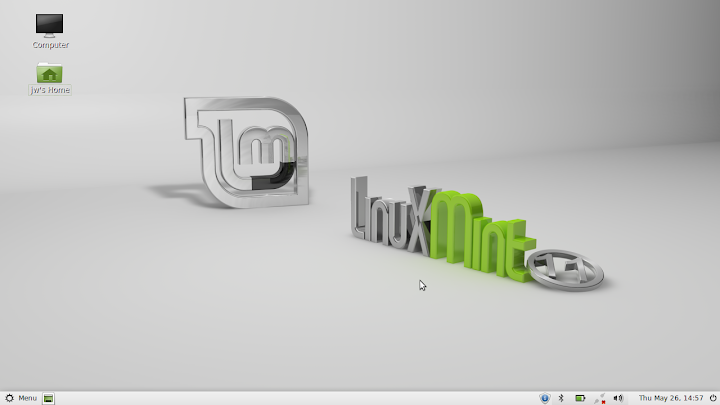 Ubuntu users who have been irritated/frustrated/enraged by Unity will breath a deep sigh of relief at this point. That is a nice, standard-looking Gnome 2 desktop, with a couple of icons on the desktop and a Panel at the bottom of the screen. There's a nice shiny (literally) updated Linux Mint logo on the default wallpaper. Whew. It's good to be home...

Now, because I just wrote about Fedora 15 and Gnome 3, and not long ago about Ubuntu 11.04 and Unity, I think that rather than the usual run-down of new/improved/updated packages and applications, I'm going to go through a series of screen shots similar to what I posted yesterday for Fedora. I hope that makes the differences very obvious, to be able to look at them one after the other. (if not, well, I'm sorry...)

The first step on the Mint desktop above is to click on the "Menu" button at the bottom left of the screen. That brings up the Mint Menu, which is significantly different from the normal Gnome 2 (Ubuntu 10.10) menu: 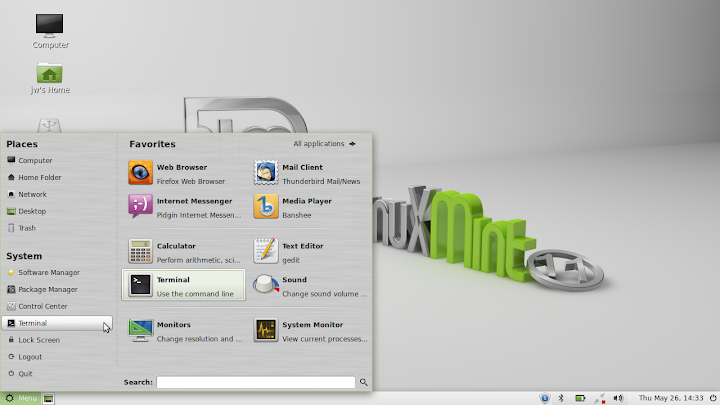 The left side of this is an abbreviated form of the Gnome menus, with some of the most common Places and Commands. The right side is a "Favorites" list, with commonly used applications displayed in user-definable groups. I have always liked the Mint Menu, I think it is very useful and flexible, and it is easy to customize. If you don't see the application or utility you are looking for on the Favorites menu, you click the "All Applications" button at the top of the menu window, and you will get this: 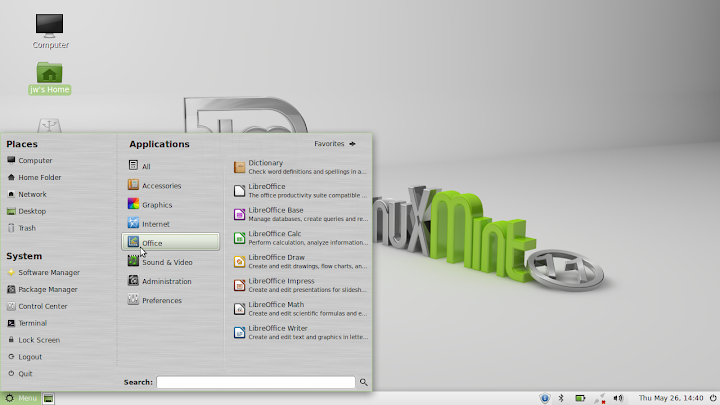 This is a very close reproduction of the Gnome menus, with various Application categories, and an "All" list (if you don't know what category to look in). There is also a Search bar at the bottom (as there was on the Favorites screen, actually), where you can type in any part of the name or description of an application, and Mint Menu will show you whatever it has that match your input. Any application displayed in these menus can be added to the Favorites menu by simply right-clicking and choosing "Add to Favorites". They can be added to the desktop or Panel in the same way.

Oh, one more thing about the Mint Menus and customization. If you choose "Control Center" from the left side of the menu, you will get this: 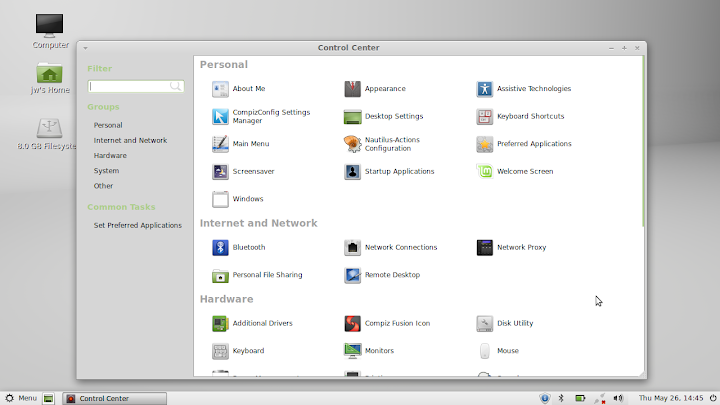 These are the often-used system controls, some of which appear in the normal Mint Menus, but others of which do not. So if you are trying to change something, and can't find the necessary control program, take a look here for it.

Starting an application or utility from the Mint Menu is as simple as clicking on the icon; they can of course also be started by clicking on icons in the Panel, if you have added any there, or by double-clicking icons on the desktop. When you start one, such as Firefox in this case, it looks like this: 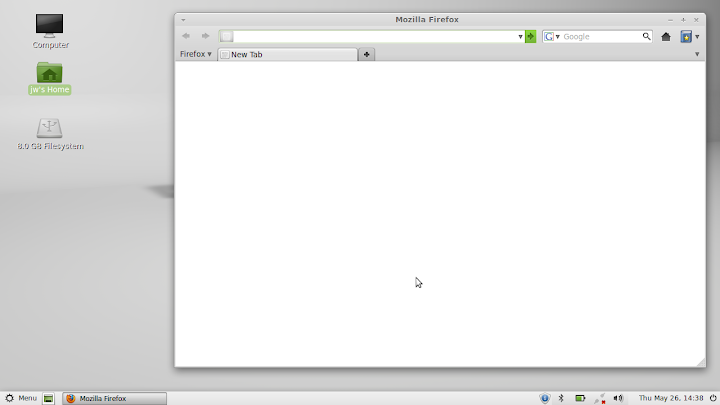 Wow, isn't that nice! A completely "normal" window, the buttons are at the right side, there are still three of them for minimize/maximize/close, the title bar is completely self-contained and not "shared" with a title bar across the top of the display. Whew. Users who are uneasy with the recent wave of changes should be very comfortable here. Open a second window, and the screen looks like this: 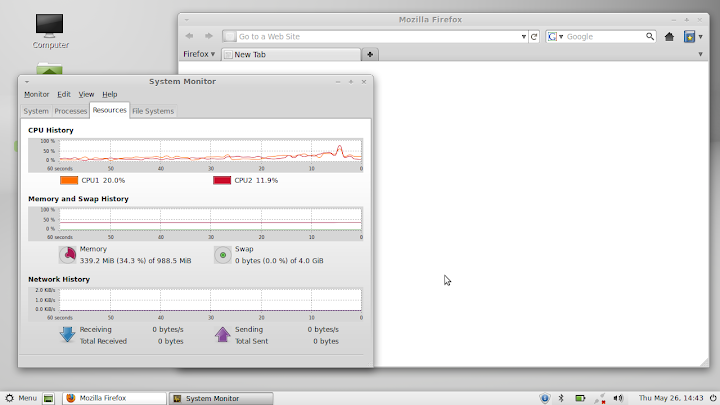 Both windows present and visible on the screen, and both have been added to the bottom panel. If you minimize them, the icon will still be in the panel and you can get them back by simply clicking the icon. Nothing hidden, and nothing new to learn to deal with.

So, what is really "new" in Linux Mint 11? Well, it has pretty much the same updates and changes as Ubuntu 11.04. That means Linux kernel 2.6.38, Firefox 4.0, LibreOffice rather than OpenOffice, and a host of other package updates. Quite a few of the Mint utilities have been improved as well; the one that most experienced users will notice first is Mint Update, which has been made much better and more reliable. There are lots more changes and improvements, both visible and under the covers. Check the Release Announcement and What's New page for all the details.

Executive Summary: Linux Mint is considered to be one of the best distributions for a lot of good reasons, and this new release reinforces that reputation.