Capacitive screens don't work with much apart from skin (or some sausages, but they're not nearly as convenient to carry around as a pair of gloves), so this cold snap is an excellent chance to find out if Echo has the solution to the problem that touchscreens and gloves don't mix.
Written by First Take , Previews blog log-in on Nov. 30, 2010

Capacitive screens don't work with much apart from skin (or some sausages, but they're not nearly as convenient to carry around as a pair of gloves), so this cold snap is an excellent chance to find out if Echo has the solution to the problem that touchscreens and gloves don't mix.

Instead of pulling off your gloves just to answer the phone, or freezing your fingertips in fingerless gloves, or fiddling around with mittens that fold back from fingerless gloves (which are bulky, not everyone's style and, I happen to know from experience, tricky to knit), gloves in Echo's Touch range have patches of what the company calls 'eLink' fabric on the tip of the index finger and thumb on both hands. 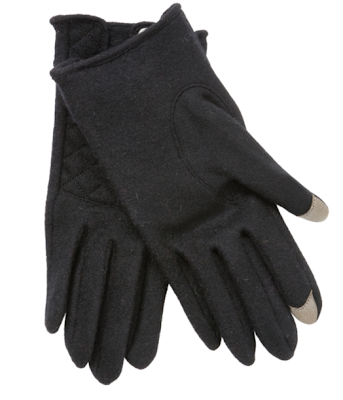 eLink patches on finger and thumb mean you can use your touchscreen phone without freezing.

Capacitive screens work because when your finger touches the screen, it changes the properties of the electric field generated by the device (because as a big bag of salty water, your body is a partial insulator — hence the iPhone 4's antenna issues). Gloves turn out to be a much better insulator than you, so your finger no longer interacts with the electric field; the conductive eLink fabric lets the field through again. Not quite as well as your skin, so you have to press a little more firmly than usual, but that's still a lot more convenient than having to pull your glove off (and warmer too).

Wearing a pair of 'quilted driver Echo touch' gloves, we were able to slide to unlock an iPhone and a Windows Phone 7 HD7, navigate the BlackBerry Touch interface and answer a call on a Motorola Milestone by swiping about as fast as usual. They also worked well with the finger-touch screen of an HP EliteBook 2740p, and we could easily launch applications, scroll through web pages, swipe or flip through interfaces and make on-screen selections with all those devices. We did have to press much harder on the screen of a Nokia E7 with the gloves on than with our bare hands, though.

You have to remember to use your index finger or thumb, and you have to get your finger at the right angle to touch with the active area. The fact that the eLink tips are sewn in means there are seams around the active area of your finger; if the seam folds under the edge of the patch it won't conduct so you have to press your finger down into the tip and you may need to twist the finger of the glove to get it in the right place; you also need to get the right size of gloves or you'll be tugging the eLink patch into place all the time.

I usually type with my thumbs, but the patch doesn't fit tautly over my thumbs and the combination of the seams and the loose fit made using the on-screen keyboard of any of the phones I tried it with just about impossible. (Typing on the EliteBook's physical keyboard with the gloves on is also a little more fiddly than usual, but if your office is exceptionally cold it's worth a try: I typed most of this review with the gloves on and had no more than the usual number of typoes.) Casual games like Prism and Flowerz work well, but anything where you need to press very accurately at speed might be more challenging.

Pinch-zoom gestures can be a little more awkward too, especially if you're used to using two fingers rather than finger and thumb. In fact when the gloves are fitting well and you're touching the screen with the flat of the pad they can work so well that you can forget your other fingers won't work!

We weren't that keen on the quilted driving glove style; the quilted back is a little stiff and there's a large gap on the back of the wrist. If it's cold enough that you don't want to take off your gloves to use your phone, you probably want gloves that cover your whole hand. In the US, Echo does a full range of styles including long gloves made of cashmere, pairs with leather grips (shiny phones did feel like they were going to slide right out of my hand), pairs with ruffles and zips, and sizes for children and men. In the UK we've only seen the driving glove style for women (£25 from John Lewis, the V&A and Fenwicks). Despite the drawbacks, Echo Touch gloves are the warmest way to use your touchscreen phone; just make sure you don't get too much rain or snow on it. 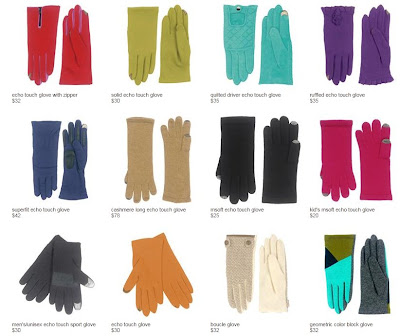 If you want the full range of Echo Touch styles, check out the US store.