The European Commission has sent Motorola, a division of Google, a formal list of complaints over how it conducts its patent litigation and subsequent enforcement.

The EU said in a statement today that Motorola had been informed of its allegations — what is known as a formal "statement of objections" — claiming that the smartphone maker had abused its market position by seeking and enforcing a patent-related injunction against Apple. 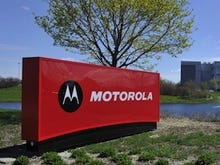 The iPhone and iPad maker was told by a court in Germany that it must stop using a networking patent relating to GPRS technology. But Motorola could find itself in trouble because while a court sided with Motorola, Apple declared it was willing to pay royalties to its rival.

Arguing that these patents are essential to the wider industry for interoperability and core functionality, such injunctions can be brought against other firms but not if a potential licensee was willing to agree on negotiated terms.

Apple filed a complaint with the Commission accusing Motorola of turning its back on "fair and reasonable" (FRAND) licensing terms.

Licensing deals of patents essential to the industry requires companies' license out their inventions under conditions that do not harm competition, or could be seen as extortionate or too expensive for rival firms.

The Commission said in a statement today that "considers at this stage that dominant [standards-essential patent] holders should not have recourse to injunctions, which generally involve a prohibition to sell the product infringing the patent, in order to distort licensing negotiations and impose unjustified licensing terms on patent licensees."

If EU antitrust laws have been broken, as its parent company, Google could be fined up to 10 percent of Motorola's global annual revenue for infringing years, amounting to as much as $1.3 billion (€0.99bn).