FedEx told me I wasn't home. It simply wasn't true

Delivery companies are in the habit of texting customers to say they've just tried to make a delivery, when they haven't. Is it human error? Or perhaps some tech snafu? I decided to investigate.
Written by Chris Matyszczyk, Contributor on Oct. 10, 2021 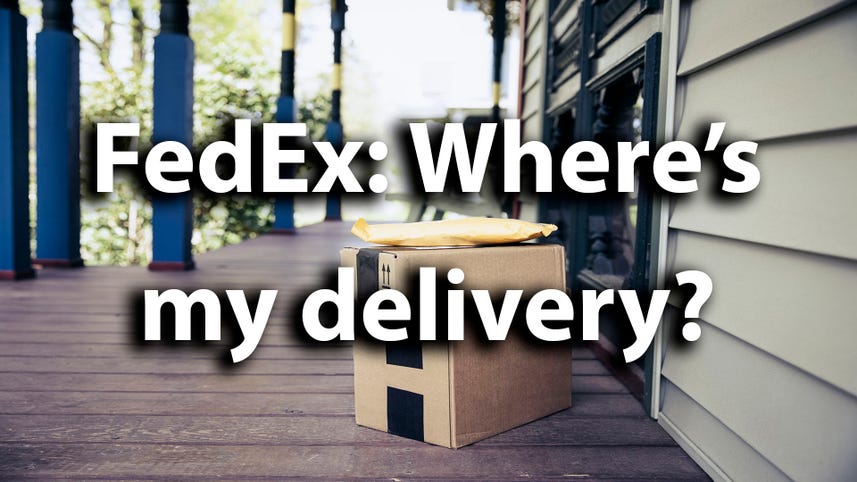 It was Alton Brown's fault.

A couple of Saturdays ago, the famed food show presenter and general apogee of erudition, was not in a good mood.

I know this because he tweeted: "I love how @fedex can send you a notice saying they attempted delivery at the exact time you were actually standing at the door waiting for the delivery."

I felt at one with Brown's plight because, at that very moment, the same thing was happening to me.

I was waiting, with extreme passivity, for the delivery of wine. Delivery companies tell you that you have to be home, because you're supposed to be over 21 and offer a signature when the box arrives.

I'd been told by text that the little box would arrive on September 23. It didn't. These things happen, especially in Covid times. I know there aren't enough drivers. I know a driver's lot isn't always easy.

Still, the FedEx website said it would be delivered the next day. It wasn't.

FedText. Information May Be Entirely Inaccurate.

Because I was signed up to receive FedEx updates by text, I received another update: "Hi, your package is now out for delivery today, 9/25. Adult signature -- identification required."

This made me oddly cheered. FedEx was working hard to deliver my box on a Saturday. Yes, it did mean one of us would have to be home, but hey, it had been three days now. This was surely good news.

How odd. We were both home at 2.36 p.m. And we feel sure that no one came to the door because we were sitting mere feet from it. Moreover, when FedEx usually comes and we're not home, the driver always leaves a tag on the door. There was no tag.

I did what many might do. I went to FedEx's website to check for the new delivery date. The following Tuesday, it said.

By this time -- though Brown's tweet made me feel I wasn't alone -- I was a little miffed.

My miffedness rose exponentially when FedEx texted me at 12:02 p.m. on the following day -- a Sunday -- to tell me that, 11 minutes previously, it had tried to deliver my package. This, I felt sure, was again bilge. Annoying bilge, too.

So, given that I'd been stuck at home waiting for my delivery, I contacted FedEx customer service chat.

It was, at least, helpful. "I apologize for the confusion but the package has not been placed on the truck out for delivery."

The alleged delivery attempt, then, was fake. All made up.

When will it be delivered, I asked. Monday, said the chat confidently.

I went to the FedEx website. It said delivery would be Tuesday. It also claimed that the Sunday delivery had, indeed, been attempted and the problem was: "Customer not available or business closed."

The package was delivered on Monday. The driver didn't ask for a signature. I really don't mind this at all. Drivers can leave things on the doorstep. It's fine.

At this point, it was time to investigate. It seemed that several people and several technological systems either weren't talking to each other or were each playing their own little game, designed to wreck consumer moods.

FedEx's corporate types apologized and had their local managers call me. Only then did I begin to realize what the game truly was.

I had to explain that it didn't bother me that the delivery driver hadn't asked for a signature.

Instead, it's the lies that get you, isn't it? It's the inference that you, the customer, are at fault because you supposedly weren't at home when you were supposed to be. Even though you were.

When FedEx Happens To FedEx.

"This has happened to me," explained the local FedEx delivery manager.

"Yeah, I've had these texts when I've actually been home."

"But you work for FedEx."

The manager then explained that, because my delivery box had been scanned, the text was automatically generated. Could it be, then, that drivers are pretending to attempt deliveries in order to fulfill some sort of quota and then making it someone else's problem?

That's how it seems. The manager continued that you always know if a real delivery was attempted because there'd be a tag left on the door. (Note to self: Relief. You're not mad.)

"I'm going to be having strong words with those drivers," said the manager. "They're not your regular drivers. Those work Monday to Friday."

I explained it's annoying to be told that something was out for delivery when it wasn't.

If Franz Kafka was still alive and realized the depths to which technology has dug, what would he say? How loudly would he scream?

Ultimately, why sign up for "helpful" texts when they turn out to be false? And why go to a website that constantly gives you the wrong date of delivery and even suggests that your business is closed?

But I know you're still worried about Alton Brown's delivery.

Well, here's his follow-up tweet: "57 minutes ago I tweeted about my @fedex issue and 1 minute ago an unmarked van sped up to the door and I have my package. I have to wonder what the non-twitter time would have been."

FedEx's current tagline is "Where Now Meets Next."

Now, could you make your next text more honest please, FedEx?