The Phab 2 Pro arrives more than two years after Google unveiled a first prototype from its Advanced Technology and Projects (ATAP) team.

Tango's 3D sensors enable motion tracking, depth sensing, and the ability to measure areas. The Tango phone, which Lenovo announced in June, launches with 35 apps that utilize these capabilities.

The 6.4-inch QHD display Phab 2 Pro features three rear cameras, including a 16-megapixel main shooter sandwiched between a fingerprint scanner below, and the paired depth sensor and motion-tracking fish-eye camera above. 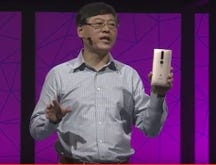 The front-facing camera has an eight-megapixel sensor. Inside, the device has 64GB storage, 4GB RAM, a Qualcomm Snapdragon 652 processor, a 4,050mAh battery, and runs on Android 6.0 Marshmallow. Currently the phone is only available in grey, but Lenovo says it will deliver a gold version soon.

Tango apps can be installed via the Tango app or Google Play and there are more than 35 of them available today, Justin Quimby, senior Tango product manager says in a blogpost.

While many are games, they do offer a glimpse at the potential for more immersive phone apps that don't require strapping on a headset.

Whether consumers find value in AR phone apps remains to be seen, but the concept at least benefits by arriving in the wake of the Pokemon Go craze. There are also utilities, such as Google's ruler-replacing Measure app, and educational apps, such as Dinosaurs Among Us.

The first set of Tango apps showcase the potential for marketers via a handful of brand-affiliated apps that offer an augmented-reality take on physical toys and experiences, such as a furniture visualizer from department store Lowes, the Crayola Color Blaster that lets you chase zombies in the real-world and blast them with paint, and the Hot Wheel's Track Builder from toy maker Mattel.

Google sees potential for the Tango design as a platform for all phones in future, and according to Quimby, the Phab 2 Pro will be joined by more Tango-enabled phones in early 2017.

"In the same way you wouldn't consider buying a phone today without a camera or GPS, Tango will be a ubiquitous capability to help your phone better understand space and the world around you. There will be more Tango-enabled phones coming in the new year and we can't wait for you to explore, learn and play," Quimby said.