Full Bio
Posted in Between the Lines on March 22, 2017 | Topic: Innovation

Researchers have created the thinnest, smoothest layer of silver to date which could transform how we create future touch screens and flexible displays.

A team from the University of Michigan said this week that the new material, made by combining silver with a tiny amount of aluminum, can be produced at only seven nanometers thick and is also resistant to tarnishing and air exposure.

Most of the time, the moment pure silver is exposed to air, the material will begin to tarnish. However, we would need this chemical reaction to be eradicated if the metal is used on the front-end of our mobile devices -- such as smartphones or tablets -- and so the research team chose to add aluminum.

The UM team also included an anti-reflective coating, which increased the transparency of the silver to up to 92.4 percent.

According to L. Jay Guo, professor of electrical engineering and computer science and a contributor to the project, it is usually impossible to create a continuous layer of silver less than 15 nanometers thick due to the material's "tendency to cluster together in small islands rather than extend into an even coating."

However, by adding six percent aluminum, the film could be reduced to a thickness of seven nanometers and maintained both transparency and conductive properties after several months of testing.

The team says that the silver coating was able to guide light roughly 10 times as quickly as other metal waveguides, which could make the silver film useful for boosting computer power and reducing energy usage, as well as serve as a base for reflective displays, flexible screens, and touch screen panels.

The silver film was also used in experiments to conduct visible and infrared light across its surface and created dense patterns a fraction of the size of today's usual methods to transport light through transparent screens for analysis on the other side.

The light waves shrink and travel as what is called "plasmon polaritons," which allows information to travel in a way far more like optic cables than copper wiring. This, in turn, means that the silver film may one day have applications in increasing computer chip processing power.

"The plasmonic capability of the silver film can also be harnessed in metamaterials, which handle light in ways that break the usual rules of optics," the team says. "Because the light travels with a much shorter wavelength as it moves along the metal surface, the film alone acts as a superlens."

"Or, to make out even smaller features, the thin silver layers can be alternated with a dielectric material, such as glass, to make a hyperlens," UM added.

Most of our mobile device screens are generated from indium tin oxide, which used to be relatively cheap. However, as the mobile device market expanded, so has the demand for this material -- leading to sharp price increases.

Perhaps, one day, the ultrathin silver could become a worthy successor to this material, especially as indium sources are becoming more scarce.

The research has been described in the paper "High-performance Doped Silver Films: Overcoming Fundamental Material Limits for Nanophotonic Applications," now published in the journal Advanced Materials.

The UM team has applied for a patent and is looking for commercial partners to bring the invention to market, and should a technology vendor or two be interested in the material as an alternative to indium tin oxide, the possibilities could be endless. 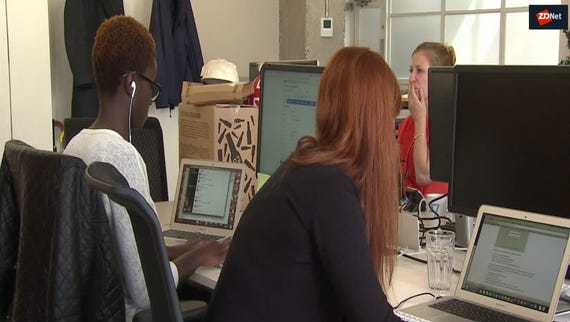 Join Discussion for: Our future mobile device screens might be...