ZDNet's Business Bargain Hunter scours the web for great deals on computers, phones, services and much more. Prices and availability are accurate at the time deals are shared. Some products and services may not be available outside the U.S. Subscribe to the BBH newsletter and follow on Facebook and Twitter for extra deals! 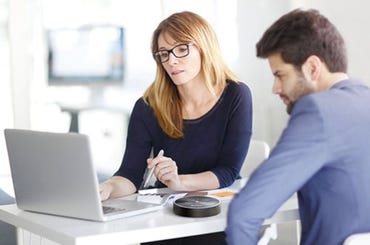 Good news, everyone! You can now sign up for the Business Bargain Hunter newsletter. Much as I know you love trawling ZDNet in search of my twice-weekly BBH deals, this will definitely save you some time.

Speaking of time, conference calls are the worst, am I right? They're especially challenging when you've got a group gathered around an actual conference table and you're trying to converse with others who've dialed in.

That's because the average office phone or smartphone does a pretty crummy job as a speakerphone -- especially with people sitting more than a few feet away, as they typically are when spread around a big table.

So do you really need to spend hundreds of dollars on a fancy conference-speaker? Not today: For a limited time, and while supplies last, you can get the eMeet M1 OfficeCore Bluetooth speakerphone for $125.99 shipped when you apply promo code EMEETM1B at checkout. It lists for $259 and otherwise sells for $180.

The M1 looks like a slightly oversize Amazon Echo Dot -- basically a big hockey puck. It can connect to your phone or tablet via Bluetooth, but also has a USB option in case you want a laptop hookup for Skype or the like.

So, why this and not a regular old speakerphone? The M1 features a 6-plus-1 microphone array that effectively provides 360-degree omnidirectional audio capture. Translation: Everyone can be heard regardless of where they're sitting.

Just as good, those microphones can pick up sound from up to 26 feet away (again, in any direction). Okay, your conference room probably isn't that big, but I can think of environments where people might be spread pretty far apart.

As an added perk, the unit is designed to be portable, meaning you can set up impromptu conference calls just about anywhere. That's thanks to its 5,200mAh rechargeable battery, which eMeet says is good for 12 hours of calls, 20 hours of music and 1 month of standby time.

As an added added perk, the M1 can double as a mobile charger: Just plug in a USB cable to top off your phone, headphones or whatever.

I haven't had the opportunity to test-drive the M1 myself, and reviews are few and far between (but extremely positive overall). The product has a 4.4-star average from over 30 Amazon customers, though there are some fakes in that mix (according to both Fakespot and ReviewMeta). Throw those out and you still get about a 4.4-star average, which is quite good.

Bottom line: If your conference calls suck because it's so hard to hear and be heard, this should help -- and for a lot less than similar solutions.

Side deal: Hey, dummy! Could you use a little help learning the finer points of Office 365 -- stuff like SharePoint integration and team collaboration? Of course not: You're a whiz! But maybe that new hire would benefit from some training -- of the kind that doesn't require a lot of your time.

Like this: For a limited time, TradePub is offering a free digital copy of Wiley's "Office 365 for Dummies, 2nd Edition." What puts the "trade" in TradePub? To get the freebie, you have to provide an active work email address and possibly a bit of other workplace info as well.

The book is delivered to your inbox as a DRM-free PDF. Incidentally, a paperback copy would run you at least $15, while the Kindle Edition runs about $13. Not a bad deal!