Kano, a small British start up with strong Israeli ties, set out to make the inside workings of a modern computer accessible to children again. The idea behind the project is get kids coding and hacking themselves, and was inspired by one of the founders' seven-year-old cousin who wanted to build a computer and wondered if it could be made as easy as playing with Lego.

Alex Klein, the co-founder in question, told ZDNet recently. "With our OS, they break the rules, share their creations with friends. We say: don't start from scratch, start with these things that we offer, and make them yours."

So how does the Kano kit measure up? 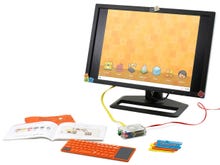 Inspired by Lego, fuelled by creativity: Linux-based Kano kit wants to get kids hacking again With the Raspberry Pi and its modular programming language at its heart, Kano is hoping to inspire kids to get involved with programming.

The Kano kit is well-packed. The orange cover opens to reveal a neat carton housing the $150 system's parts. Among them is Kano's heart, a standard Raspberry Pi Model B board, with a Broadcom BCM2835 SoC, 700Mhz ARM CPU, 512 MB of RAM, two USB ports, composite and HDMI video out ports, 3.5 mm audio jack, 10/100 Ethernet socket, and an SD card slot.

The kit also comes with plastic casing, a speaker, wi-fi dongle, a cute orange wireless keyboard with an integrated touchpad, an HDMI cable, a micro-USB cable for power with a wall adapter and SD card with KanoOS installed on it – all in bright, happy colors designed to appeal to young eyes.

Also in the box are three booklets - one for assembly, one for coding and one with technical specs - two orange cardboard alternative covers, and three sheets of fun stickers.

The assembly booklet is all cartoon based, beautifully-designed and introduces the user to Judoka – Kano's mascot, a dark haired smiley kid in a Judo suit. Judoka will accompanies its owner throughout their Kano experience.

In the booklet, there are instructions on how to assemble the Kano computer, from putting the board into its case, through connecting the speaker and the cables, the wi-fi dongle and the wireless keyboard on to the power cable and powering up the system.

The assembly itself is really easy – everything snaps into place nicely, and the parts themselves are all very well-built: the plastic casing, the speaker, the green wi-fi dongle and the cables (we fell in love with the power unit – it's one of the best smartphone chargers out there!).

The entire experience really reminded me of assembling hardware myself as a kid, and I guess this was what Kano's team was aiming for. And good news for parents: the kit is worth its $150 price tag and it's safe for children to build by themselves.

The same kind of friendly approach is also found in the Kano's software. Upon firing up the Kano, you'll be greeted with a message asking for your name. After that, Judoka walks you through how to use the mouse and keyboard, and a narrates a short video explaining the Kano OS.

Based on Debian, Kano OS is bright, colorful, rather orangy version of the Linux distribution. The desktop is fairly simple, it has a 'start' button marked with a big K, and all the applications right there on the screen. On the taskbar, there's access to everything users might need: volume, settings, updater, internet connection, notifications, profile, and help.

On the desktop itself, there are icons for the games Snake, Pong and Minecraft. There's also a music composer, Chromium browser, applications folder and files. You can also find shortcuts to your profile and Kano World – the Kano hub where there's content for the system, you can see other people's creations and check out your general status.

That status gives more information on the achievement system that the Kano team has built in. It has badges and challenges to encourage kids to explore and it works well. In general, the entire experience is crafted to inspire kids to code, offering bits of knowledge about the computing world, and it's implemented gracefully.

Sure, you can play Snake, Minecraft, Pong, surf the web, watch videos (Kano's browser and Video applications are closed ones, offering a filtered environment for children) and play tunes on a virtual keyboard, but the main purpose of Kano is to give children an introduction to coding and hacking, and here lies its greatness.

Kano teaches children (who can read English) about the use of command line by introducing them to some Python basics, and to visual development environments by their own Kano Blocks, which allows children to drag and drop pieces of code and invent their own version of Pong, or make some Minecraft creations. With Kano Blocks, children can learn about programming basics, and even make their own first programs.

Most of the time, the Kano OS and applications smooth over Linux's rough edges and manages to create a safe, highly supportive experience for children, but here and there, especially with applications not optimized specifically for Kano, the intervention of an adult– and a techie one at that - is required.

Kano has definitely fulfiled the goals it set out to. In aiming to get today's younger generation interested in how computers work, expose and stimulate them to explore the insides of a modern computer, both on the hardware and the software and coding front, and get them creating content on a computer and not just passively consuming it – Kano has hit its mark, and very well.

Join Discussion for: Hands-on with the Kano: The Linux kit that...