The U.S. House today voted to pass the Freedom Act, the decade-after follow-up to the Patriot Act, which first authorized massive global and domestic surveillance in the wake the September 11 terrorist attacks. 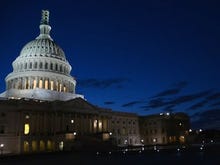 US House committee votes to end NSA's bulk metadata collection program The US House Judiciary Committee said the move "takes us one step closer to ending bulk collection once and for all and safeguards Americans' civil liberties."

However, the real fight is now in the Senate's hands, which according to congressional sources will aim to counter some of the lobbying effort by the Obama administration by strengthening previously removed provisions.

Rep. Jim Sensenbrenner (R-WI), the bill's author — who also introduced the Patriot Act just weeks after the attacks on New York in 2001 — previously said that the new bill was designed to counter the "misuse" of the original powers by the U.S. government, which "overstepped its authority."

It was passed by the House Judiciary Committee earlier this month after months of stagnation. After the bill was jump-started, it was quickly seen as the most prominent and likely legislative effort to restrict government surveillance since the 2001 attacks.

However, in prepared remarks on Thursday following the bill's passing, Sensenbrenner admitted that he wishes the bill "closely resembled" the bill he first introduced.

"The legislation passed today is a step forward in our efforts to reform the government’s surveillance authorities," he said. "It bans bulk collection, includes important privacy provisions, and sends a clear message to the NSA: We are watching you."

But the wider technology industry and privacy groups took a stronger stance in recent days by pulling their support for the bill.

"What is being considered is not the bill that was marked up by the House Judiciary Committee," Rep. Zoe Lofgren (D-CA) said on the House floor on Wednesday. "Certain key elements of this bill were changed. I think it's ironic that a bill that was intended to increase transparency was secretly changed between the Committee markup and floor consideration," she added.

"What is being considered is not the bill that was marked up by the House Judiciary Committee." — Zoe Lofgren

One of the changes that riled Silicon Valley giants and privacy groups alike was the broad definition of database searching. Under the act as it stands, a search inquiry is allowed if it is a "discrete term," such as a query that would identify a "person, entity, account, address, or device."

Previously, the act limited the searches to a "person, entity, or account," which was seen as more specific and restrictive for intelligence agencies.

According to Ars Technica, which spoke to Kevin Bankston, policy director of the Open Technology Institute, "It's now dangerously broad and vague."

Also, a coalition of the U.S.' largest technology companies, including Google, Microsoft, Twitter, and Facebook, warned that certain definitions in the bill would create an "unacceptable loophole" that could enable the bulk collection of internet users' data.

The coalition said it would not support the Freedom Act as it currently stands.

The Electronic Frontier Foundation said it was "dismayed" by the "gutted" bill, which the privacy group claims does not substantially reform the foreign intelligence gathering statute, known as Section 702, which targets non-U.S. citizens, but has been known to collect American data.

"The new version not only adds the undefined words 'address' and 'device,' but makes the list of potential selection terms open-ended by using the term 'such as'," it added in a statement on Tuesday.

Meanwhile, the Center for Democracy & Technology's chief executive Nuala O'Connor said on Tuesday that: "The bill now offers only mild reform and goes against the overwhelming support for definitively ending bulk collection."

Amnesty International also withdrew its support on Thursday, hours before the bill was debated on the House floor.

In a statement, the group said: "The bill provides no protection for non-US persons and the provisions designed to protect U.S. persons have been extensively watered down. Significant further reform is necessary in order to ensure the privacy rights of U.S. and non-U.S. persons are respected."

The group also urged the Senate to ensure that the bill is "non-discriminatory," and "subject to judicial and democratic control and oversight," among other recommendations.

The bill will now move to the Senate, despite the eleventh-hour changes to the House bill, where sources suggest it will be pulled apart and initial provisions designed to restore trust in the U.S. intelligence community will be rewritten and added.

Update at 2:30pm ET: with remarks from Congressman Jim Sensenbrenner.