The Tattoo is HTC’s attempt to bring the Android platform to an audience on a budget. But don’t get too excited about that. While we did indeed find it online for around £100 less than the top-end HTC Hero, it will still set you back something like £250 Ex VAT, so it is not really a pocket-money toy.

The Tattoo runs Android 1.6, which Rupert blogged about a few days ago. In addition to keeping bang up to date with the OS, HTC has decided to allow for a little user customisation, and to that end you can buy different colour variants of the smartphone and even customise the shell with your own designs. 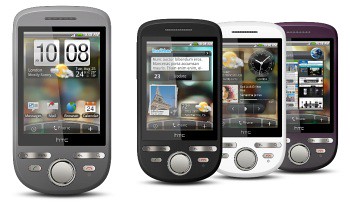 Customisation aside, the physical design is fairly mundane. If you are a fan of the mini trackballs that feature on the HTC Hero and Magic you may shed a small tear. The trackball has been replaced here by a D-pad. Overall this is a fairly small device at 106mm x 55mm x 14mm and it weighs 113g.

Some corners have been cut to get the Tattoo’s price down. The most obvious victim is, unfortunately, the screen. At 2.8 inches and 320 x 240 pixels I found it just that bit too small for comfortable use at all times. Nowhere is this more apparent than when entering text. The on-screen QWERTY keyboard, available in both wide and tall modes, is really too small in either to use at speed. The difficult isn’t alleviated by the use of resistive rather than capacitive technology for the touch screen.

On the plus side, the Tattoo sports HTC’s Sense user interface. This is a skin placed on top of Android which pretties up the look and feel, and, importantly, allows for an extremely user-customisable setup. There are seven home screens, between which you can finger pan. Each can be populated with widgets, both Android’s and HTC’s, and you can set up variations and save them so that you can have a complete ‘outfit’ for work, for play, for travel, and so on. HTC supplies some presets that you can fiddle with.

The HTC Tattoo sports Wi-Fi, HSDPA (384Kbps/7.2Mbps), a 3 megapixel camera, Bluetooth, GPS, an FM radio, accelerometer, 3.5mm audio jack, 512MB of ROM, an SD card slot, and the ability, in my experience, to get through a day without needing mains power.

Having been a user of the HTC Hero for some time I found remarkably little to complain about as far as the Tattoo is concerned. The small screen seems to be its main drawback, and unfortunately this will put many larger-handed users off.