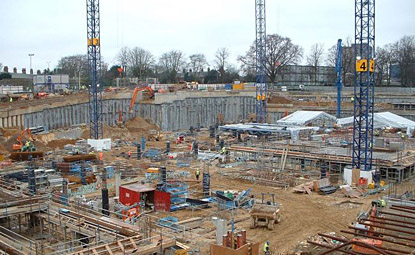 Here's an interesting collaboration case history: US Bank, the 6th largest bank in the United States, are rationalizing around IBM's Lotus Notes 8.5, Quickr, and Sametime for their 58,000 employees.

This week I spoke first with Bob Picciano, general manager of IBM Lotus Software and then later with Mark Dickelman who is the senior vice president for innovation, research and development at U.S. Bank, to get some background and context.

US Bank, like many sizable institutions, have been running an earlier iteration of Lotus Notes and domino internally but watching with strategic interest the rapid developments in Enterprise Web 2.0 activity and parallel changes in employee behavior, influenced by consumer web 2.0.

IBM are in a sense a victim of their own past success in these types of situations: the Notes email and calendaring client works well and is typically powering Blackberry and internet communications in thousands of large institutions. The sense of urgency around upgrades can be tempered with an 'if it ain't broke why fix it?' mentality.

The attraction of building a 'Web 2.0 workforce' to solve issues such as more easily finding and sharing intelligence in the digital haystack - US Bank have more than 5,000 siloed Microsoft Sharepoint sites for example - and to start to move staff on from the document sharing metaphor was considered strategically important.

'The old Notes was fine for the last century' said Dickelman, but the decision to solve this century's business challenges started with the people side of the equation first. US Bank identified a core 'collaboration stack' of workflows was needed: email, chat and team based share spaces. Catering to known people and their roles, the effort is intended to improve how core business processes work.

This modernizing process was intended to improve navigation and ease of use while providing tools that cater to individuals preferred ways of communicating - some live in email, others in instant messaging for example - that would enhance their ways of working.

The typical industry shoot out between Microsoft Exchange versus Lotus Notes was won by the IBM product and US Bank set about the core modernization process twelve months ago of emigrating from Notes 6.5 to 8.2 for server rationalization (like many large businesses US Bank has acquired various business units and some homogenization was needed across divisions).

Having built a solid IBM foundation the next leg of the mission is updating to notes 8.5 and associating it with Quickr and Sametime.

This technology initiative is a relatively small component of a larger project - US Bank are clear that the people side of the equation is the major challenge.

Changing human behavior, without forcing them, has been designed around training and communications programs. Core internal collaboration rules of engagement and a policy group have helped the bank retain control and awareness of the workflows they need from their enabling technology.

A parallel but distinct and separate internal non hierarchical 'social media' project with self identified and assigned roles and work plus open info sharing has attracted attention but is considered somewhat disruptive in the context of existing workflows which are working well in some cases. This can be both a good and a bad thing of course. Tacit knowledge capture is powerful but the bank's touchstone internally is profiles - the corporate phonebook.

The collaboration system is designed to compliment the existing flow of the way people work, and along with the associated training this provides 'guard rails' for employees compared to the not-yet-well-understood ways of working with social media software.

When the Lotus products install is complete next year, US Bank expect their collaborative needs to be met with Lotus Quickr. This file-sharing repository  allows employees to find and share insight through a variety of communication channels, including emails, instant messages, blogs, and wikis. Along with Notes email and calendaring there is communications tool Sametime, so employees can reach coworkers and get immediate feedback via instant messaging.

The issues around scale are not well understood in many Enterprise 2.0/'Web 2.0 in Business' circles. For a company in an industry with tight regulatory compliance and great sensitivity around customer privacy, this type of core unified foundational solution is vital as a bedrock on which to build the underpinning of greater collaboration and communication.