iPhone 4: Apple raises the bar; AT&T pushes it back down

Sure, the next-gen iPhone looks like a real winner, but three years after the first iPhone debuted, is AT&T still holding it back?
Written by Sam Diaz, Inactive on June 7, 2010

I'll admit it upfront: I've already become an Android guy. I bought the Droid Incredible last month and, even with today's release of the iPhone 4, I have no regrets about my purchase. With that said, if the iPhone 4 had been an option on the Verizon Wireless network a few months ago, I might have thought twice about my purchase - but not for the reasons you might think.

At yesterday's keynote speech to announce the new iPhone, Apple CEO Steve Jobs spent the first 30 minutes talking about iPad, iBooks and the App store. Of course, the speech kicked off a developer's conference so an extended update on the mobile app landscape was to be expected. And, iPad and iBooks are the latest darlings to come out of Cupertino, so that was no surprise either.

But none of that really impressed me. Thousands of apps? Blah blah blah. iBooks that sync to all of your devices for free? I would expect no less. One iPad sold every three seconds? I'm sure the guys on Wall Street are cheering about that. But those aren't deal-breakers or deal-makers.

What did catch my attention were features like the Retina display, an enhanced resolution that went beyond raising the bar of visual clarity of both images and text. I was easily impressed when Jobs talked about the importance of photon capture over megapixels as a way of considering camera quality. And I was wowed by the demo of the Jenga game using the new Gyroscope feature - something that has the potential of opening the doors to new types of handheld gaming. 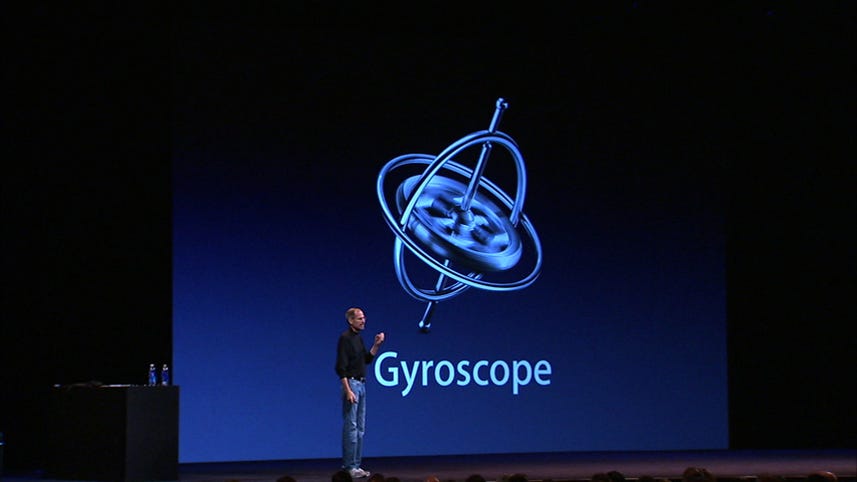 Finally, I have to admit that I was pleasantly surprised by the pricing of a device that Jobs seemed to be positioning as a premium, a notch (or two) above the competition that might be worth the extra few bucks, a la the Mac.

So, yeah, the iPhone 4 is a winner - nice new hardware design, as well as some cool stuff with the software, which we kind of already heard about back at the iPhone OS 4 event in April but is still impressive, nonetheless. But there was one major improvement that the iPhone needed and didn't get in this new version - a new carrier in the U.S.

I know, it's the same old song I've been singing for some time. In fact, in a post exactly one year ago today, I referred to AT&T as the iPhone's anchor, holding it back from dominating the mobile landscape the way it did with iPods on the mp3 player shelves. And yet, one year after that post - and after three years of AT&T exclusivity - AT&T is still the butt of jokes, blog post headlines and now, even a talking point for Steve Jobs in interviews.

At the D8 conference last month, he said that AT&T has the fastest 3G network in the nation and that it's getting better - but then paused to say that he also wishes it would get better faster.

At yesterday's keynote speech, he emphasized that the video phone feature - called FaceTime Video Calling - is only for use over WiFi for now, saying, "We need to work a little bit with cellular providers." And people chuckled. He also talked about the under-the-hood performance and the ability to process downloads of 7.2 mbps and uploads of 6.8 mbps. But then he paused to note that those speeds are theoretical because the carriers don't support them yet.

The real winners out of yesterday's news announcements are the current iPhone owners whose AT&T contracts are set to expire this year. Not only is AT&T allowing them to re-up their contracts for two more years so they can get discounted pricing today, it's also allowing them to keep their unlimited data plans, which AT&T eliminated for new customers, effective yesterday.

That means they can check out the new Netflix app or place as many FaceTime video calls as they'd like without worrying about megabyte-overage charges. But new customers will fall under a new two-tiered pricing plan that caps customers at 2 GB per month and then starts tallying up overage fees after that.

In an earlier post, I wrote  that AT&T's new data plans feel more like a company that wants to discourage usage rather than invest in it so it can support what Apple is envisioning. Apple is already making excuses about its new features being theoretical or WiFi only because the carriers aren't ready for it.

Sounds to me like AT&T is stifling the iPhone, holding back Apple as it tries to innovate and raise the bar against the competition. The device is only as good as the service that powers it. And so long as AT&T is the only game in town, Apple can raise the bar as much as it likes - but AT&T will keep pushing it back down.