I spent the past week installing and testing Jolicloud 1.0 on two of my systems - one "real" netbook, the HP 2133 Mini-Note, SVGA 1024x600 model, and one "oversize" netbook, the HP Pavillion dv2-1010ez. The results have been mixed, to put it mildly. I think that I see what they are doing, and where they are going with this. It is a very, VERY web-centric / cloud-based operating system, not only at the level of the applications such as Facebook et. al., but at the level of the operating system itself. That kind of operating system is not for me, on both levels. I don't use "social networking" applications at all, period. I don't want my computer(s) to be tied to, dependent upon, or constantly exchanging information with the "cloud", period. But I am old, and my feelings and computer use patterns are probably not typical these days - perhaps even more so in the case of netbooks.

With that said, here is a short overview of what I did, and what I thought of it at the time.

- Your netbook must be connected to the Internet in order to use Jolicloud. No exceptions. Even to booth the "Live USB" image and install on a netbook, you have to be connected to the Internet. If there is a way around this, I didn't see it. The good news is, if you have a wired network connection, it just comes up and you can get on with it. If you have a WiFi connection, you will have to configure that after booting the Live image, before you can get on with the installation. (By the way, I don't recall this being required for the Jolicloud Pre-releases.=

- You must have either a Jolicloud account or a Facebook account in order to install the 1.0 release; if you don't have one, you have to create one before you can install. However, in the process of creating an account you have to confirm an email that they send to you, so you had better have another computer, or some other way of accessing your email and the web.

- Once you get throught he Internet connection and account creation, you will walk through a typical Ubuntu installer sequence. It is, however, a rather old Ubuntu installer, so it still has the problem with windows being too large to fit the screen if you have a number of disk partitions. Unfortunate.

- Once the installation is complete and you reboot, you will be asked to "Activate" the computer. Part of the activation is to identify the make and model of the computer, and there is a note saying "make sure you exactly identify your computer" - but then the list they are working from seems rather limited to me. The HP 2133 was on the list (although as a "Mini 2133" rather than its correct name, 2133 Mini-Note), but the dv2 was not. Obviously this is a difference of opinion about what qualifies as a netbook, but I would think that asking for "exact" identification could lead to a lot of such differences... not to mention new systems coming out, and such. Unnecessary confusion.

- Once you are up and running, there is a limited set of "default" apps on the desktop. (Chromium, Facebook, Twitter, Gmail, etc...). Additional apps can be added via the "Add" button, but in my opinion finding specific apps was tedious, at best. Again, maybe this is just me and my old-fashioned way of looking at and thinking about Linux systems, but I found the list to be poorly categorized, inscrutably ordered, and generally confusing.

- Whatever you do to your desktop, such as adding an App, will be propagated to any and all other netbooks on which you load or run Jolicloud - including booting the Live image for installation on another netbook. I suppose this is good, especially if you are using the netbook as a general internet access device, and you just want it to look and act the same no matter where or what you are using. In fact, technically, they are not actually "added" to other devices, but the icon shows on the desktop and the first time you try to use those apps, they will be downloaded and installed.

- Updates seemed to be handled quite well, an icon showed in the task bar announcing update availability, and clicking the icon downloaded and installed the update.

I would like to include at least one or two screen shots showing the desktop, default apps and the like. But first I have to figure out how to install some sort of screen-capture utility...

In summary the first thing I would say that, regardless of the fact that I don't think I would like or even use Jolicloud myself, I think that it is much better than the alternative, Moblin/MeeGo, which I have also tried and found to be completely inscrutable. If you use your netbook primarily as a web-access, social-networking device, you might be very pleased with Jolicloud.

Update - Using feedback provided in the comments, I have found the screen shot utility - either press Alt-PrtSc (ala Windows), or under Settings (the icon that looks like a gear in the title bar), then This Device, Legacy Apps. Here is the base desktop: 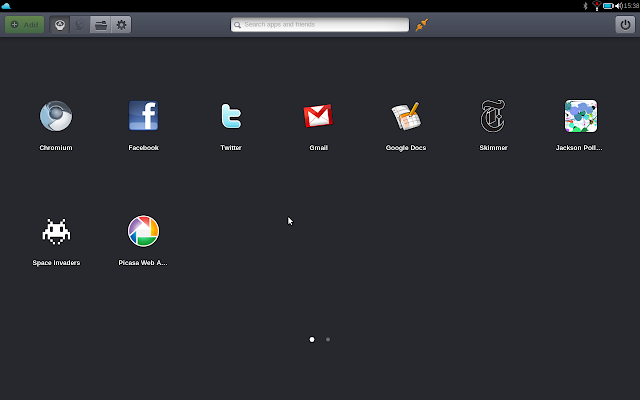 That Legacy Apps screen can be very useful for Linux traditionalists... 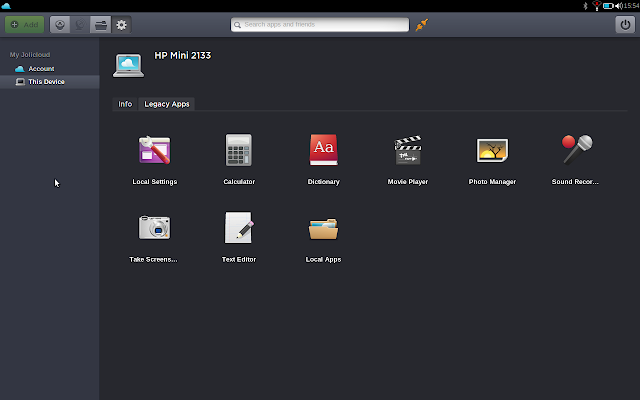 I also need to modify one statement above. When I was installing Jolicloud, and first tried to use it after installing, it required an Internet connection and Jolicloud account. But now as I am writing this, I am able to bring it up without a connections, and work locally on the netbook. I suspect that once I have "Activated" the device, and it knows my Jolicloud account, it stops demanding the connection during startup.

Finally, I want to mention that I like the innovation that is going into Jolicloud, and I think they are doing an excellent job with the graphics. Presenting and managing files, folders and drives is a good example of something that I think is being done better than Ubuntu Netbook Edition. Here is the Drives screen from my netbook: 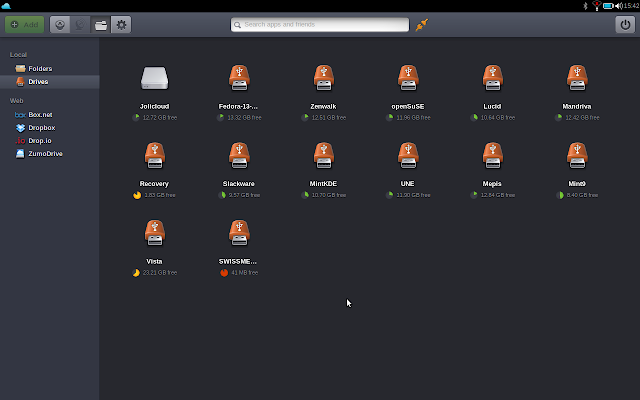 Not everyone is going that have that many partitions, but my point is the good, clear presentation, and the obvious functionality. Good stuff.