Since finding that Fedora 16 works the best of the Linux distributions I have tried on my Samsung netbooks, I have been making more and more use of it. I generally load the Gnome version of Fedora (for historical reasons), but that left me without my favorite photo management application, digiKam.
Written by J.A. Watson, Member blogger on Dec. 20, 2011

Since finding that Fedora 16 works the best of the Linux distributions I have tried on my Samsung netbooks, I have been making more and more use of it. I generally load the Gnome version of Fedora (for historical reasons), but that left me without my favorite photo management application, digiKam. The obvious solution was to switch to the Fedora 16 KDE distribution, but when I tried to load that I ran into some minor problem (I don't remember exactly what, but whatever it was although it didn't seem like it would be a big deal that the time, I just didn't have time to fool with it), so I shoved that project onto the back burner. Then I saw the Kororaa 16 Release Announcement.

I have been meaning to give Kororaa a try for quite some time now, so this seemed like the perfect opportunity. In many ways, Kororaa is to Fedora what Mint is to Ubuntu - the base distribution with a lot of stuff added to make it much more pleasant and usable out of the box. That sounds very promising, because one of the few complaints that is frequently heard about Fedora is the restrictions they have on non-FOSS software, and Kororaa takes care of a lot of that. On top of that, they have a very cute logo:

Kororaa has both KDE and Gnome versions, but as digiKam was my original goal here, and I am already very happy with the Linux Mint Gnome version(s), I downloaded the KDE version. The ISO can be burned to a DVD (way too large for a CD) or converted to a LiveUSB stick using exactly the same procedure as for Fedora. In fact, the entire installation procedure is the same as for Fedora, which means that it is clear, simple, reliable and fast. So far I have installed it on three of my netbooks - Samsung N150 Plus, Samsung NF310 and HP Pavilion dm1-3105ez. Not only did I have no problems with any of these installations, I got some very nice surprises when I booted the installed systems. While Fedora 16 was released without the latest Broadcom WiFi drivers (they have since been added in an update), Kororaa includes them in the new base distribution, so when I rebooted the Samsung netbooks they were ready to use - nice! A bit of testing and verification to be sure that the display brightness was also working correctly on Kororaa... yes, it's fine. I did a bit more testing of various things, such as Fn-key controls (they all work), Suspend/Resume (it works), wired and wireless networking (works, of course)... Everything seems to be just fine, and exactly the same as it is in the latest updated versions of Fedora 16. So far this is looking very good. 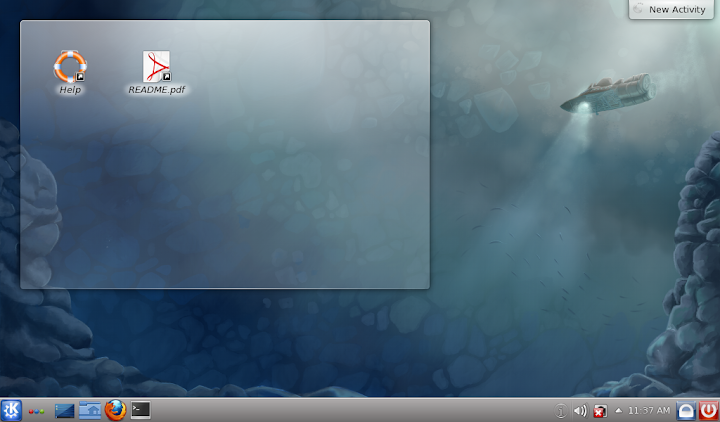 Now for the real reasons I am trying Kororaa. First up, digiKam... yes, it is there, and Hooray, it is version 2.3.0! So, my primary goal in doing this has been achieved. What else? Hmmm... Firefox is the default browser, and it is version 8.0, that's fine. LibreOffice is there, and it is version 3.4.4, that's good. The default media player is VLC, which is my preferred choice as well, so that is good. GIMP is there, version 2.6.11, so all those who got their feelings hurt when it was removed from Ubuntu should be happy here. There are lots of other things as well, much like Linux Mint, the Kororaa developers really have tried to include a lot of the most popular and most commonly used packages. Even when that means having some things overlapping, such as digiKam, Gwenview. showFoto and the Kipi Panorama Tool. It has Java - openjdk and IcedTea - and the Xine plugin for a variety of multimedia files in Firefox.

What about packages and applications which are not included in the base distribution? I mentioned Adobe Flash at the beginning of this post. Start the "Software Management" utility, and you get the following window, where you can install updates (more on that below), or search, select and install additional packages and programs. 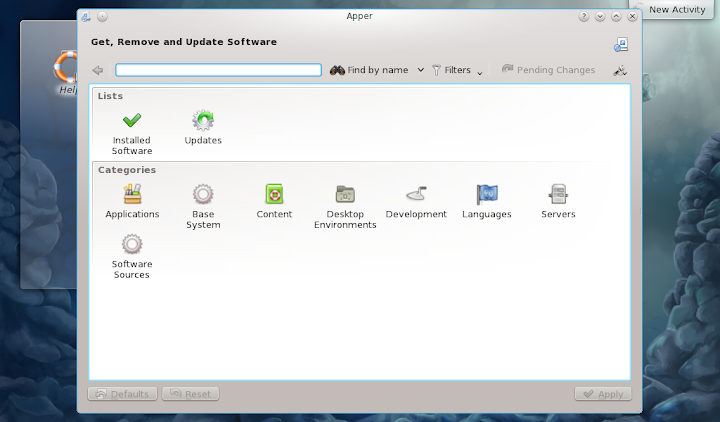 Enter "Flash-plugin" in the search box, and you get two entries - one of the original Adobe Flash Plugin, and one for the "flash-plugin-helper". Select the helper, and you get some additional text which explains the difference between the two: 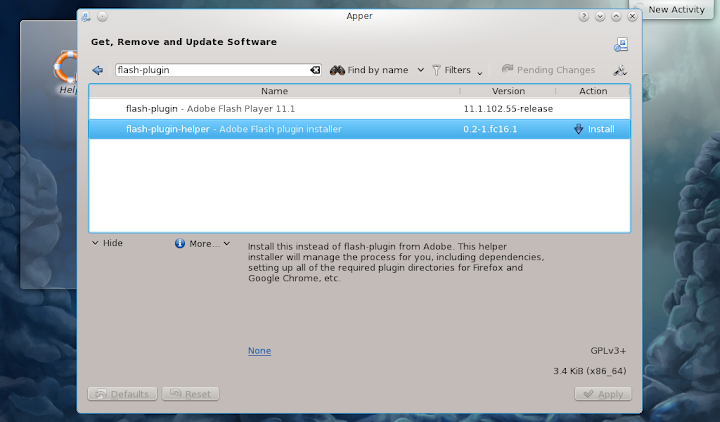 So, click "Install" for the helper, and when it finishes you've got the Adobe Flash Plugin installed. Although getting this installed is not terribly difficult in Fedora either, this is a good bit easier, and it does the dirty work of setting up the necessary repositories and dependencies for you as well. Nice. If you prefer Google Chrome rather than Firefox, you can install that from the Software Management utility just as easily.

Kororaa updates are handled by this same Software Management program. You probably noticed the "Updates" icon in the screen shot above. Click that, and it kicks off the update process. When you do this the first time after installing, you have to have a good bit of patience because it has to look up all the repositories and construct the local information for them. I have updated all three of my systems, and it took about half an hour from start to end each time.

One last note before I wrap this up. Kororaa also includes Ubuntu's Jockey Device Driver manager, which is that handy little program that pops up the "Additional Drivers" window on Ubuntu (and Mint). So if you have a system with an ATI or nVidia display controller, it will detect that and offer to install the necessary drivers for you. That is like a trip to heaven for those who have struggled with getting those drivers installed themselves. Of course, there is one small problem because of this - on system which have the Broadcom 4313 WiFi adapter, Jockey will insist on popping up and offering to install the STA driver for you. Don't fall for it! The brcmsmac driver, which is installed and working by default, is the one you want!

To get a better overview of Kororaa Linux, the ideas behind it, what it includes and why, check their web page. My take on it is this - if you have looked at Fedora before, and you didn't want to use it because of the difficulty and tedium of getting a lot of common non-FOSS packages installed, then you should take a look at Kororaa. Of course, if you are a FOSS-purist, you are likely to think that Kororaa is an abomination, pretty much along the lines of the people who have scolded me here before about Ubuntu taking the "pure" Debian distribution and adding non-FOSS pacakages to its distribution. That's the beauty of choice in the Linux world, look around, figure out what you like, find a distribution that you like and which fits your needs, and use it. It's all good!