Probably the most difficult thing a user is going to run into with Linux Mint 10 (Julia) at this point is simply downloading it. Demand for the new release has obviously been far greater than anything they have seen before, and their servers have not been able to keep up with the load.
Written by J.A. Watson on Nov. 15, 2010

Probably the most difficult thing a user is going to run into with Linux Mint 10 (Julia) at this point is simply downloading it. Demand for the new release has obviously been far greater than anything they have seen before, and their servers have not been able to keep up with the load. As of this morning, Monday 15/11/2010 at 9:00 Swiss time, getting a response from their main web page is still inconsistent, so if you know of a mirror nearby, you would be well advised to go directly to it.

I downloaded the new release on Saturday, and installed it on all four of my notebook/netbook systems with no problem. That covers screen sizes from 14 inches to 9 inches, four different CPUs (Intel Core2 Duo, Intel Atom 455, AMD Athlon Neo and VIA C7-M), four different graphic controllers (Intel 965, Intel GMA 3150, ATI Radeon HD 3410 and VIA Chrome 9), four different Wireless Networking adapters (Intel 5300, Atheros 9285, Broadcom 4312 and Broadcom 4313), and diverse other bits and pieces of hardware. All loaded, configured and run with no problem, the most I had to do was allow the "Hardware Drivers" utility to install the Broadcom WiFi drivers. Although I could have also allowed it to install the proprietary fglrx driver for the ATI graphics, I chose to stay with the FOSS Radeon driver. The point is, there was no searching, compiling, tweaking or whatever required to get any of these four very different systems loaded, configured and working.

The "standard" Linux Mint distribution is Gnome-based, so the basic desktop is very familiar: 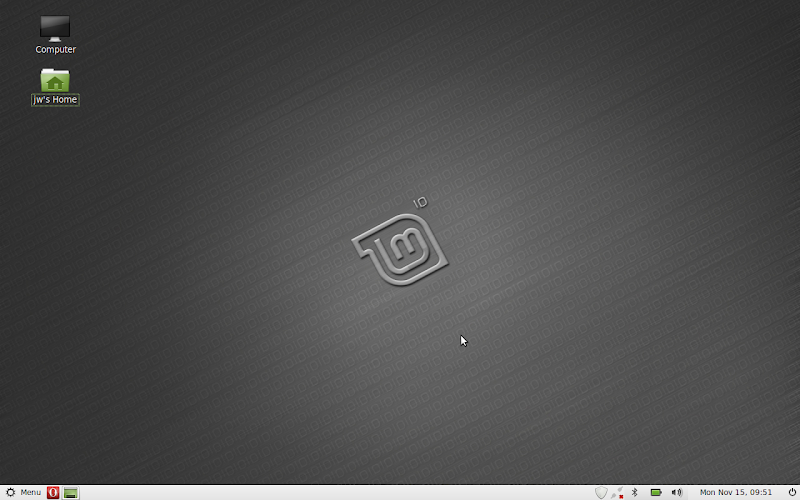 That's not the best looking wallpaper that I've ever seen, but it is a long way from the worst as well. There are, of course, a variety of others available, some of them quite nice looking. Oh, and this is not exactly the original desktop, as I have added Opera to the Panel, and changed the options in the clock...

What makes Linux Mint really interesting, however, is that it is based on the latest Ubuntu release (10.10 in this case), but with a lot of very nice "Mint Extras" added. One of the best of those is the "MintMenu", which looks like this: 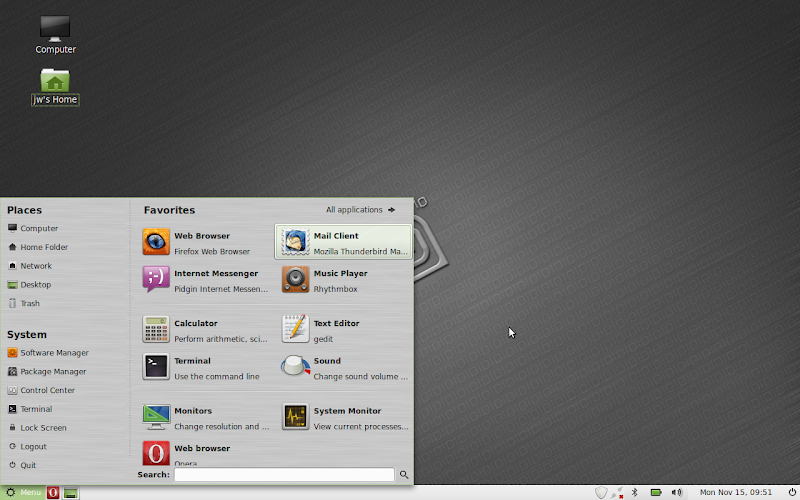 That gives you a very clear presentation of Places, System utilities, and your Favorite Applications. You can change the contents of the Favorites section by right-clicking an item and removing it, or going into the "All Applications" menu (shown below), right-clicking any item there and adding it to Favorites (at this point you can also add items to the Panel or Desktop).

If you click on the "All Applications" arrow at the top right corner of the menu, you get a menu presentation that corresponds to the Ubuntu menus, with sections for Accessories, Graphics, Internet and so on. There is a significant difference, though - there is also an "All" menu at the top of the list, which will give you a list of everything in all of the other menus. I've found that to be particularly nice when I don't know where something might be categorized, such as when I have just installed a new package. 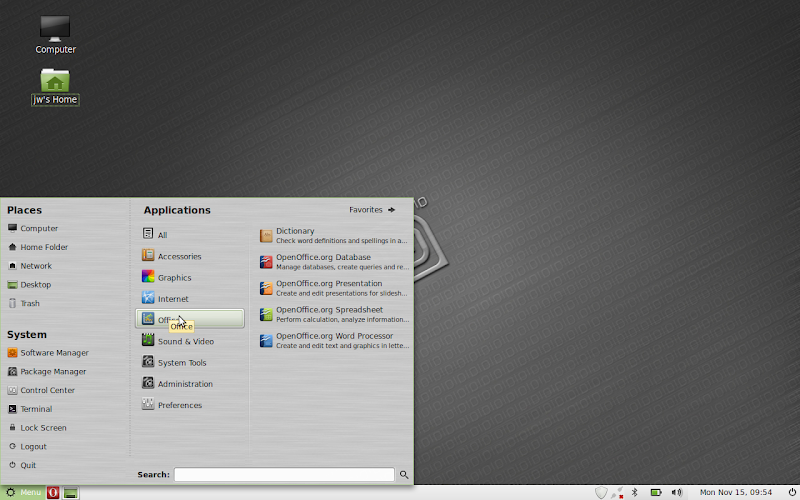 On the left side of the Mint Menu is the Software Manager, which contains an extensive list of available packages, along with comments from other Mint users, information about how popular or how frequently installed each package is, and such. 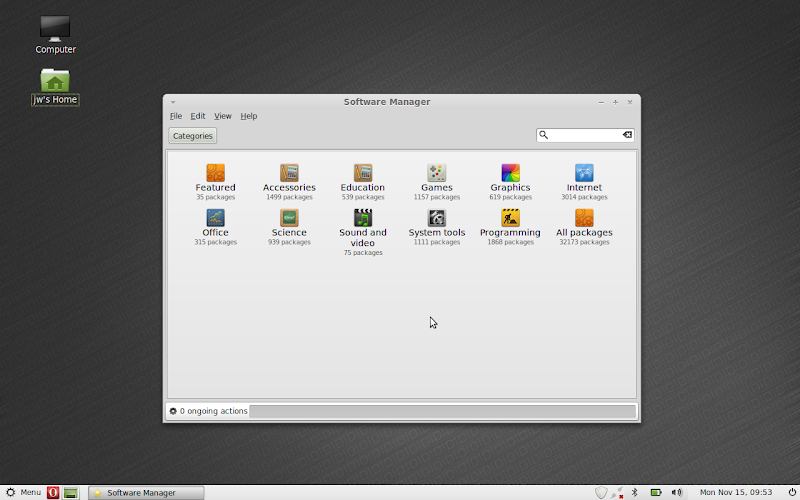 This screen shot shows another of the advantages of Linux Mint - they have not blindly followed Ubuntu down every alley. In particular, they have not moved the window controls to the left side of the title bar, so those who prefer the traditional layout (as I do) will still be quite happy with Mint. It will be interesting to see what Linux Mint does if/when Ubuntu changes to Unity for their standard desktop... I'm keeping my fingers crossed that they will stay with Gnome 3.

I always say that the absolute best thing about Linux Mint is that it is "Ubuntu plus all the stuff I would have to load myself anyway", and this release is no exception. Mint still includes the GIMP image editor, which was dropped from the base distribution by Ubuntu several releases ago: 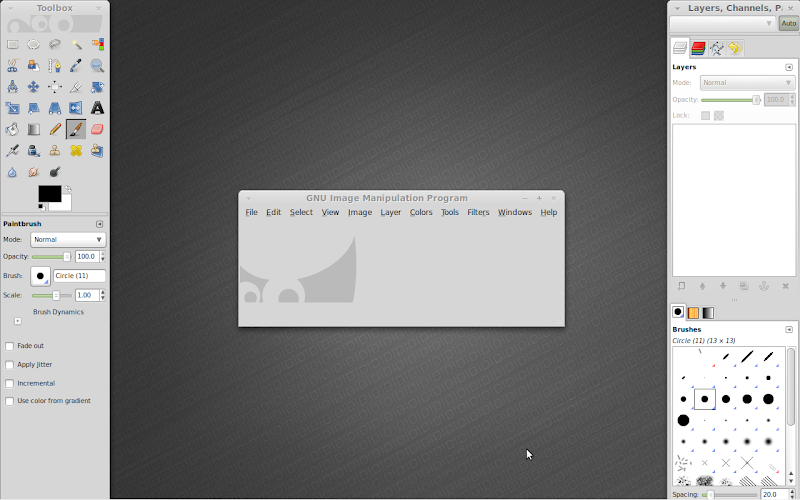 That's only one small example, of course - check the release announcement for details of what is included in this release, and the What's New page for a very nice description of new and improved features in this release.

Just a couple of technical notes. Linux Mint uses the MintUpdate utility, which categorizes and selects updates from upstream sources as well as those from Mint themselves. You will see a shield in the Panel, with a check-mark when you are up to date, or an exclamation point when updates are available. You can adjust the type and severity of updates that you want to be automatically notified about, and if you are absolutely determined you can always go back to Synaptic and get updates that way.

Linux Mint 10 is available in both 32-bit and 64-bit distributions, in either CD or DVD format. The CD distribution is kept below 700 MB, so it will fit on a single disc, while the DVD format goes over 800 MB and of course includes even more pre-installed packages. Either of those can be converted to LiveUSB media using the Mint (and Ubuntu) "Startup Disk Creator" utility, and of course they both fit easily on a 1 GB or larger USB flash drive.

I strongly recommend Linux Mint 10, and it is the distribution that I most frequently install when preparing computers for friends, especially those who are trying Linux for the first time. I get by far the least number of "how do I do this or that" questions from people whom I have put on Mint systems. Personally, I am very much looking forward to the release of Linux Mint 10 KDE, so that I can get the advantages of Mint and the wonderful KDE Plasma Netbook desktop on my netbooks.