TechCrunch kicked off its second Disrupt Hack Day this morning, and it was at least 5x bigger than last year's event.Each team gets 60 seconds to present their idea.
Written by Andrew Mager, Inactive on May 22, 2011

TechCrunch kicked off its second Disrupt Hack Day this morning, and it was at least 5x bigger than last year's event.

Each team gets 60 seconds to present their idea. Most of these hackers have been up all night, so this is definitely a climactic moment for them. One thing to note is that most people here came to the hackathon with an idea already built. If they were smart, they would have spent the 24 hour period preparing their presentation. 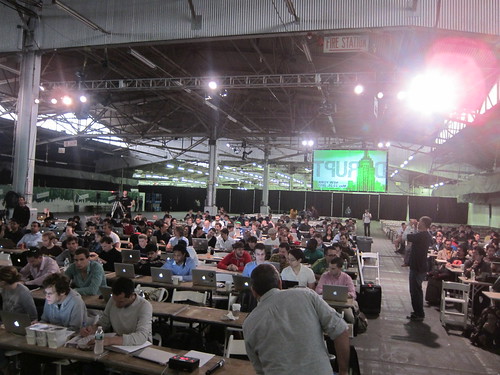 I'm going to summarize all of the hacks with a short blurb (I'll spare you from ideas that have already been created):

Docracy is Github for legal documents.

Freelance Flash Mob is a way to find other freelancers in the town they live in.

WikiPuttPutt is a game that asks you to go from one Wikipedia page to the next. For their example, they were going from Michael Arrington to Quantum Electrodynamics. It's easier than you think.

My Bill Is is a social payment system, like Venmo. This obviously wasn't created in 24 hours. Fail.

WorkAround is Grindr for jobs. It lets you search for nearby people who need jobs. Very cool. 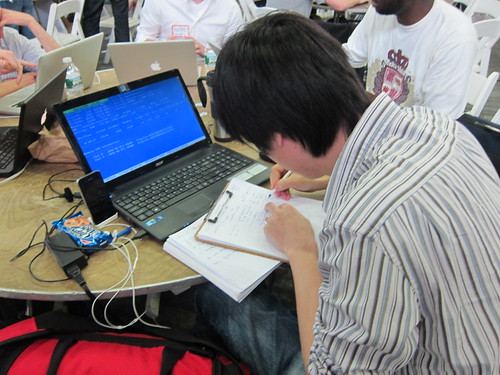 InsideTrck lets you earn money for moving out of your apartment. You can post your apartment, and you somehow get money if it gets sold. Not really sure I understand how it works.

PastPosts delivers a daily email about nostalgic posts on Facebook. 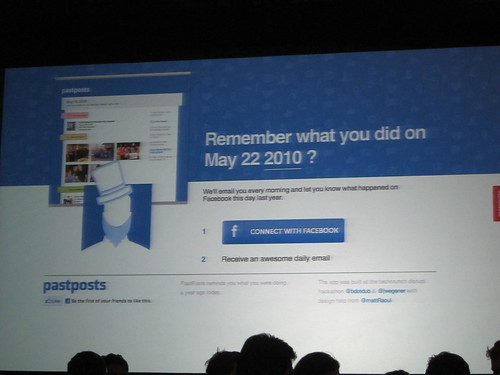 Gilt-ii turns Gilt into an auction site. If two people really want a certain dress for example, they can bid on the item. This could be used for many other platforms besides Gilt though. Imagine scalping tickets on Ticketmaster before they are even out.

Cnvrge is a site that lets you create a speed-dating event anywhere. It's completely built using text messaging.

CrunchGraph is a visual representation of CrunchBase. It's a really cool way to see how companies are connected.

Lunchli.st lets you setup lunch with your friends on Facebook or LinkedIn. I think a lot of people would use this.

magsty lets people connect with Facebook and create a magazine to share with your friends. This site needs a lot of cleanup. It kinda looks like a link farm/phishing site.

ThePick.me lets you create ad-hoc surveys of clothes/outfits for your friends to judge and rate.

Project Sauron is facial recognition software for Facebook. Terrifying, but awesome. Video below.

Granddaddy Why is built on the assumption that everything you tweet will be read by your grandkids. 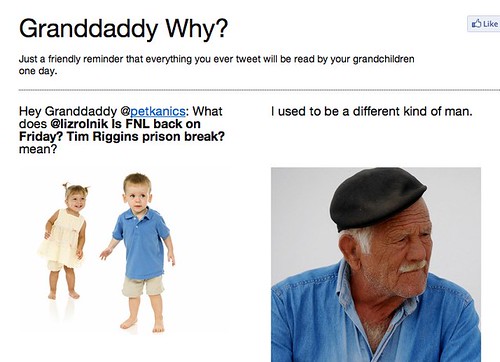 Chicks For Geeks is an iPhone app that lets you trade your friends for better friends. It's a market place for letting you trade chicks for friends. Their next startup is called Babies for Beers.

NerdNearby aggregates all of the tweets and Instagram posts of nerds nearby you.

MyCRM lets you take notes on contacts in your address book. One cool feature is that it lets you note down where you met someone.

Disrapture lets you see who survived the rapture by seeing who has tweeted since the last rapture.

Joinable.org creates email addresses for homeless people to help get them a job. They can use an 800 number to access their inboxes. Very cool. 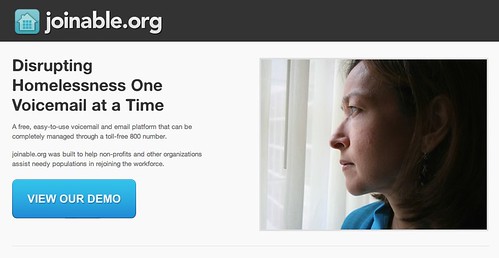 Fourstalk lets you visualize where your foursquare friends are on a map. Passport allows you to see where you've been on foursquare. 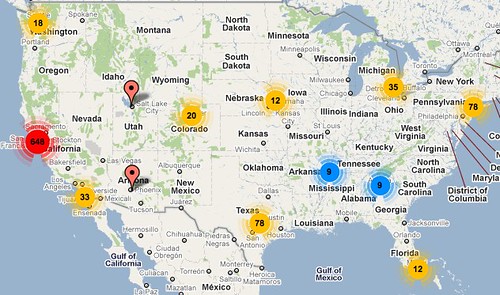 Meals4Me is actually a healthy meal planner. You put in your weight and it figures out how many calories you should be eating. It also gives you recipes and lets you track all of your meals. Very cool.

WebRemix takes a song and a URL and remixes them based on k-means clustering. Right now it's just a Python script, but this is one of my favorite hacks of the day.

SlideSync lets you view a presentation on your iPad when you're at a conference. Maybe you are sitting too far away, or you just want to have it locally. You can also annotate and draw on the slides. Very cool.

B1llboard sends you a weekly email about what movies, TV shows, books, and entertainment that your friends are talking about.

ClickCaptcha is way better than filling out a scrambled captcha. Instead of typing jibberish in a box to validate a web form, you just match a picture with its description.

Chatstreams lets you time-shift live chats/tweets. For example, if you're a fan of a TV show, you can view chats or tweets about the show not in real-time, but at your own pace. It's like TiVo for livestreaming.

Peeq is a visual Q&A mobile app. Instagram meets Quora. Take a picture of something you have a question about and people will answer it.

Football Verdict helps you choose your fantasy football team each week. You can ask questions about which players to use, and the crowd will answer.

AlphaVision is a way to visualize Craigslist postings in a different way. (I wasn't able to capture a good screenshot)

UIComposer lets you design apps with a drag and drop interface. 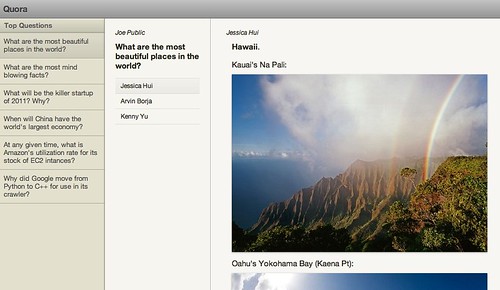 Baitr is for people who have an idea but will never carry it out. It's what LaunchRock should be. Sign up for early access here: http://baitr.co/

QRViews helps businesses get into the minds of the customers. It's a B2B real-time feedback management system that lets you fill out a quick survey to help the business learn about your experience. The only problem is that it's tied to QR codes, which are a disaster.

Yatr helps you carry comments across sites and topics.

Chatfé basically just spent 60 seconds pitching their company. They will be disqualified.

StoryCloud is a beautiful way to create storybooks and magazines using links on the web. 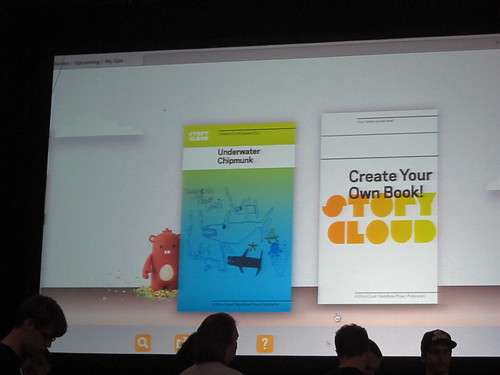 The guys from GroupMe built something called Headphone. I don't really understand what it does.

Venture Crapital allows you to inject capital into CrunchBase. It's kind of a game. If the bubbles get too big, they pop.

PollPlanes lets you create a cartesean plane about any question. This is too advanced for the average person, but it's pretty sweet. Definitely check it out: http://www.pollplanes.com/

B00st is real-time news, but better than Digg and Reddit. http://b00st.com/

Cloud Assass.in lets you play Assassin with anyone online. The way you kill someone is by taking a picture of them when they're not looking.

Facebook Time Machine lets you take your Facebook profile back to any date. It's a cool way to see how much your friends have changed.

GoOutMania is a dating site with the emphasis on actually going out. 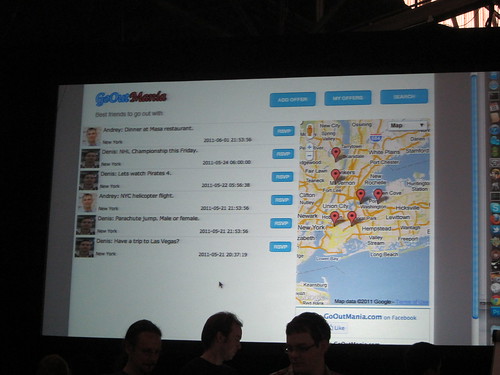 Interworld turns your web browser into a real portal. Your character jumps through links and swims around the screen.

Bikometer is a water-resistant bike attachment for tracking progress through the city.

Predict A Ball is a really cool way to see sports stats over time. The guys at ESPN would probably love to talk to these guys.

I'm not sure what the name of this project is, but it's hilarious. It's a robot who tells you how to act on a date:

Ekplore is a real-time pulse of any city.

Teenygram lets you create those sites that display huge random blobs of text.

h3ll0w0rld is a social network for programmers. One of my favorites for sure.

AngryBlackMan is like Dance Dance Revolution. I'll let you guys explore this one on your own.

BuyBy is a geographic index of products at stores. These guys have something really cool.

Whodata? is a way to stalk people using Hunch, Twitter, Klout and other social services.

SoundScape is like Shazzam with places. You can see where songs are on certain jukeboxes. These guys need to talk to Roqbot.

dispatch.io brings all your cloud stuff together with Dropbox. This might be my favorite. They use a browser plugin that lets you put stuff in your Dropbox with one click.

Snatch Me is flash dating. They pick one lucky single guy and girl and feature them on the site.

YoMama Alarm lets you set an alarm on the web. The only catch is that it makes fun of your mom. 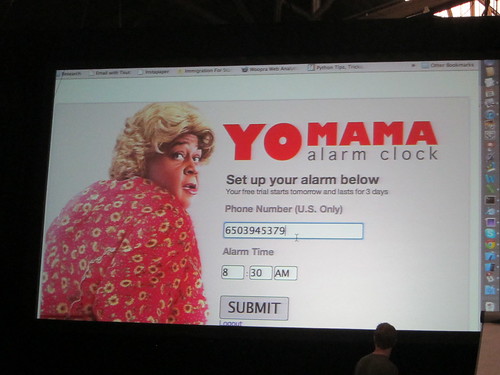 How do you measure the social ROI of a YouTube video? LinkCurrent has an algorithm that helps figure this out for you by listening on Twitter, and figuring out how many people have linked to it. Very, very cool.

That's it! I'll update this post again once I find out the winners.