Writing. We all do it. Both on paper and via a keyboard. There is sometimes a choice about which media to use. Paper can be more convenient, but you may ultimately want your writing on a computer.

The Livescribe Pulse Smartpen is designed to remove this dilemma. Provided you use the appropriate paper, which is peppered with tiny dots, its infrared camera can record what you write and draw, and you can transfer that to a PC by docking the pen in its provided cradle. Purchase an add-on application and your written words can be turned into editable text. 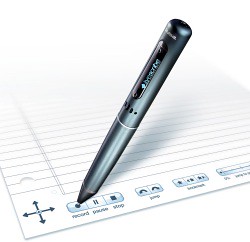 The pen can also record audio: to do that you have to press its nib on various controls on the special paper. This means that in a meeting you could record what people say, adding extra nuances to the written word.

In the real world the need to use special paper might be a bind. The Livescribe notebooks aren’t cheap, and while you can print your own paper via the Livescribe Desktop software which stores the pen’s output, that too has a cost. The pen is a little large to carry around and in my small hand it was a bit unwieldy to use because of its size.

You need to remember to keep the pen’s battery topped up, which is done by docking into its cradle. The easiest way to do this is to have the cradle permanently on the desk and permanently occupying a USB port, though obviously you can put the cradle away when it is not being used if you prefer.

The Livescribe Desktop software isn’t provided in the box with the pen, but must be downloaded. This ensures you get the most up-to-date version, but for initial setup it might be seen as a bit of a bind. In my case, the pen’s firmware also had to be updated before I could start using it. It was a smooth process, but meant another little wait before I could be productive.

Data is uploaded to the desktop as soon as you dock the pen, and the process is automatic. Pages of writing are saved in the order they are written into the notebook. You can export individual pages as PDFs or image files, but can’t rearrange them within the Livescribe Desktop software.

Via the Livescribe Desktop software you get access to 500MB of online storage, which could be handy if you want to share documents with others, though there are so many online storage services available that you may well already have something set up to which you can send exported PDFs or image files.

Audio files are organised within the desktop software by the time and date that they were recorded. It is easy to rename them but you can’t link them to pages, so playing back an audio file while reading a document is a manual process. You have to find the audio file and then find the page it relates to manually.

The pen can run applications, and you access these by tapping on a crosshair cursor on the special pad and moving through a menu system which is displayed in a small OLED screen. It is a bit of a fiddle to use, but there is potential for some handy stuff here. My sample pen had a few apps with no apparent use apart from to show off the fact that they can exist. Classical music snippets, for example, was unnecessary, but the hangman game was fun. There are also applets for foreign language dictionaries, travel phrases and more. 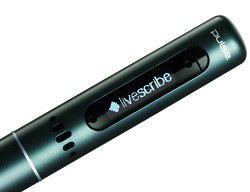 The pen has a loudspeaker, incidentally, for playing back recorded audio or other audio files such as those classical music snippets I just mentioned and various bits of information and instruction that the pen issues from time to time. There’s a 3.5mm headset jack in the top of the pen in case you want to avoid annoying other people, but you may feel a bit of a jackass when wired up.

There is no doubting that the Livescribe Pulse Smartpen is a clever piece of kit. However at £119.99 for the 2GB version and £149.99 for the 4GB version, £17.95 for a set of four A4 notebooks (all prices from Amazon.co.uk), plus a further $29.99 for the writing to editable text conversion software direct from www.livescribe.com it's not an inexpensive piece of kit.

Check our photo gallery for more images of the Livescribe Pulse Smartpen.