Well, "It's Been A Long Time Coming". If you're not old enough to remember Crosby, Stills & Nash singing that song at Woodstock, perhaps you are at least old enough to remember that this Mandriva release has been "in the works" for a very long time. Despite a lot of problems, real and rumored, and a significant delay rather late in the development cycle, they have now produced a whopping baby - the ISO download is 1.7GB! The Release Announcement is rather terse - it boils down to "the release is available, it might be a good idea to read the release notes or take the demo tour while installing". The Release Notes don't actually have all that much more to say, but the do at least contain some encouraging words about compatibility and upgrading from previous Mandriva releases. The Release Notes also explain that starting with this release Mandriva is a KDE-only distribution - no more Gnome, Xfce or other desktop environments or window managers. If you want those, or others, you'll have to depend on contributed packages from the Mandriva community. There are also notes about the selection of "standard" applications, most of which I agree with and think are good choices (Firefox, Thunderbird, LibreOffice and the like). One I rather strongly disagree with, they have dumped digiKam in favor of Shotwell (see recent blog post by apexwm).

Download is easy, if a bit lengthy due to the large ISO size. The distribution is still a "hybrid ISO" image, which means that you can create a bootable USB stick by simply using the dd utility - or of course you can burn it to a DVD. When you boot the ISO, you get the first look at the new drive for "simplicity" at Mandriva. The boot menu has two items, "Launch System" and "Install System". That's it, no other options. It doesn't get much simpler than that - even the splash screen is a solid light blue background with the Mandriva logo, no fancy graphics or dancing penguins here. The installation process is very similar to previous Mandriva releases, but I ran into two somewhat worrying problems. First, when setting up the disk layout, it came up with a message that said the partition table on /dev/sdb was so badly corrupted that it was unreadable, and asked if it was ok to lose all partition information on that device. Yikes! Fortunately, that is the USB stick I was installing from, so I was pretty sure that it wouldn't really do anything to it, and I didn't much care if it did, but a message like that is likely to scare away a lot of inexperienced potential users. Second, during the initial boot after completing installation, it asked for my country - but Switzerland wasn't in the list! Swaziland was there, but not Switzerland. Hmmm. I just left it on U.S.A. and figured I'll straighten that out after I complete the installation. 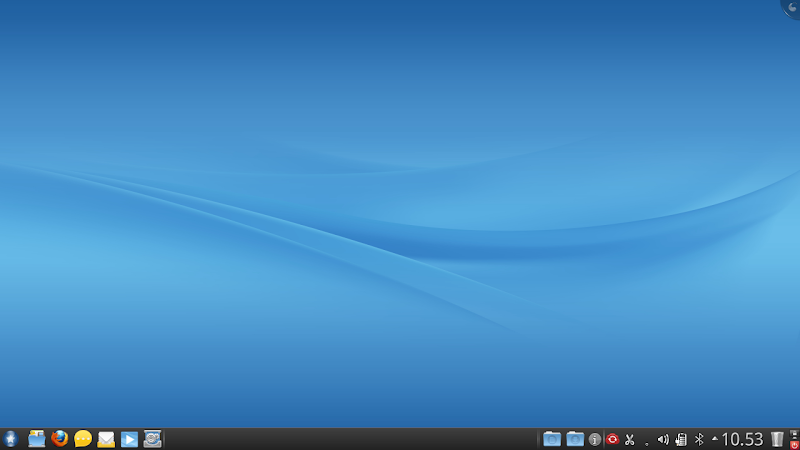 The basic KDE desktop has been customized rather nicely by Mandriva, as shown above. On the left side of the panel are icons for Firefox and Thunderbird, Clementine (Music Player), Kopete (Messenger) and Dolphin (File Manager). On the right side there are the usual icons and controls for networking, sound, bluetooth and batter, plus a new one for the Mandriva Sync client, and "Stack Folder" icons for Documents and Downloads. StackFolder is a new development in KDE for access to frequently used files and directories.

Clicking on the KDE Menu icon (at the bottom left of the screen) brings up this menu: 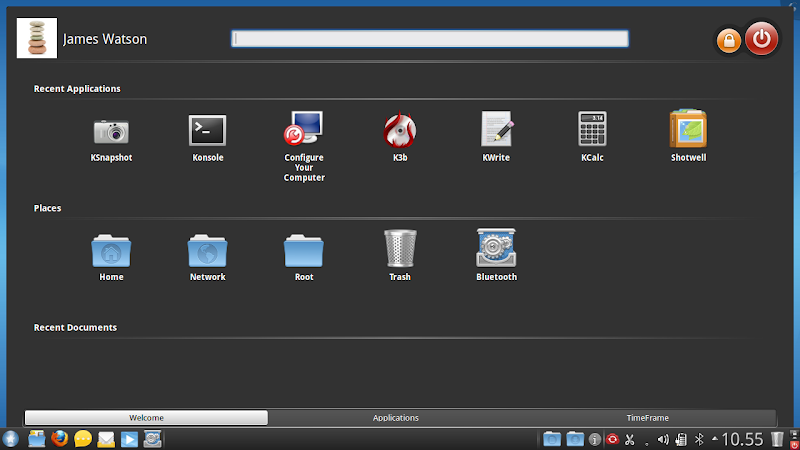 Zowie, now there's something new for Mandriva and/or KDE. It looks sort of like the shell/launcher in Gnome 3 and Unity. There are three tabs at the bottom, which give you the "Welcome" view, which is the default, continaing recently used applications and the list of places; the "Applications" view, with a fairly typical categorized list of applications (Internet, Office, Graphics, etc), and "Time Frame", which will do something with Nepomuk that I have not figured out yet. At first glance this looks like it might be a pretty good compromise between the traditional desktops we have been used to for years and the new directions that Gnome 3 and Unity want to take. Hmmm. These are interesting times...

Functionally, I have so far only installed this release on my Lenovo S10-3s - I chose this one not only because it was handy, but because it can be a difficult case for Linux distributions because of the Broadcom 4313 WiFi adapter and the Synaptics ClickPad touchpad. So far it has worked out pretty well. The ClickPad works very well, including left and right click and drag-and-drop functions. I'm now anxious to see how that part works on my HP dm1-3105 with the "newer" ClickPad. The 4313 WiFi adapter was, well, about as expected. Mandriva gets extra points for at least knowing that this adapter exists and can be a problem, but loses them immediately because they have the brcm80211 driver blacklisted by default, so it uses the older wl driver. They also don't seem to know about the problem with the acer_wmi driver that interferes with the 4313 adapter on the Lenovo netbooks. The bottom line on this is that you need to go to /etc/modprobe.d/blacklist-brcm80211.conf, remove the line which says "blacklist brcm80211" and add two lines saying "blacklist acer_wmi" and "blacklist wl". Then reboot and wireless networking should work.

In summary, my opinion of the new Mandriva release so far is generall positive. It looks good and it seems to work well. I will try it next on my HP netbook, and see how it does with the new ClickPad (I'm hopeful) and the Ralink 5390 WiFi adapter (I'm not hopeful). Then I will try it on another netbook with the Broadcom 4313 WiFi, but without the acer_wmi problem. I will post the result here soon.