Shortly after having been dumped on by Nokia (and Microsoft), the MeeGo developers have made a new release available. Now, I have never been a big fan of MeeGo (to put it mildly), or of Moblin before it, but I sincerely tip my hat to them for this.
Written by J.A. Watson, Contributor on May 20, 2011

Shortly after having been dumped on by Nokia (and Microsoft), the MeeGo developers have made a new release available. Now, I have never been a big fan of MeeGo (to put it mildly), or of Moblin before it, but I sincerely tip my hat to them for this. There are obviously a lot of very talented people working on MeeGo, and they have shown a lot of determination in the face of adversity over the past couple of months. They have done a good job, too - in fact, what I had intended to do was quickly install the new release, verify what had or had not changed, and then write a brief note about it. A funny thing happened along the way, though. The more I looked at it, the more I found myself thinking that it seemed a lot better than their previous releases. So, I have revised my plan, and this is turning out to be somewhat more extensive than I had thought it would be.

So, starting from the beginning... the distribution images can be downloaded from the MeeGo Downloads page, the netbook version comes in two flavors either with or without the Google Chrome browser (and the Chrome End User License Agreement). I chose the version "without". The download is a .IMG file, which can either be burned to a CD or copied directly to a USB flash drive. You can then boot that media, and either run it as a Live CD/USB or go straight to the installer. The installer looks to me like a version of Anaconda with a MeeGo-style GUI stuck on it. The installation is pretty routine, except for one thing. If you're going to multi-boot (i.e. you're not making a MeeGo-only system), you have to set up the partition(s) and file system(s) you want. Unfortunately, MeeGo doesn't support the ext4 filesystem, so you have to choose between btrfs and ext3. The default is btrfs, so that is the "logical" choice... but when you do that it then complains that you can't boot from btrfs. So you either have to set up everything in one ext3 filesystem, or you have to create an ext3 /boot partition and then a btrfs root partition. Sigh. It's really not a big deal, but it is irritating.

Once I got past that, everything seemed to install quite easily and it rebooted to the installed partition on the disk. I got another small surprise when I went to configure the multi-boot setup, though. I always seem to forget that MeeGo doesn't use GRUB, it uses the SysLinux bootloader. So I had to dig around and find the syslinux config files, and remember how to multi-boot that with my various GRUB installations. Once again, not too difficult, but another bit of irritation, so I was muttering under my breath by the time I was finally done with the installation. Of course, the kind of installation that I am making, multi-booting with a bunch of other Linux distributions (and Win7) is certainly not typical for MeeGo. I would think the more usual kinds of embedded or dedicated installations that MeeGo is designed for would be a better match (duh, maybe that's why they designed it this way!).

Once the installation was complete things got considerably more pleasant, thankfully. The main screen looks like this: 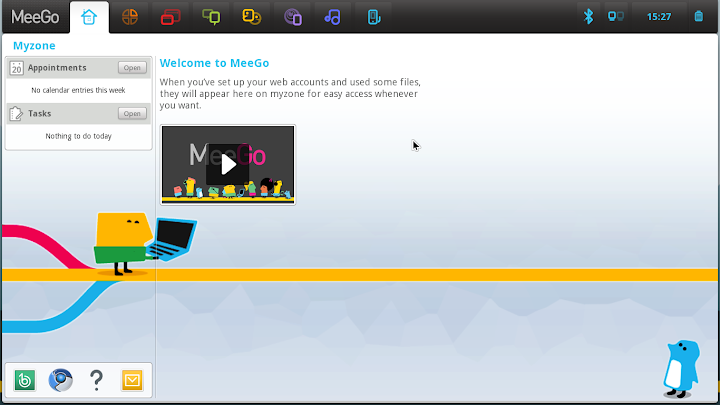 If you have looked at any of the previous MeeGo/Moblin releases, you'll recognize this as being pretty much the same home screen. I haven't compared them side-by-side, but this one actually does look a little nicer to me, or perhaps I should say a little less objectionable. It still has the same symbols across the top, several of which I still don't get the visual association with their content. Maybe they have just improved the color scheme a bit, or touched up the overall graphics. Anyway, I have looked at each of the pages in the MeeGo desktop previously, so I'll just hit a couple of the better ones this time. 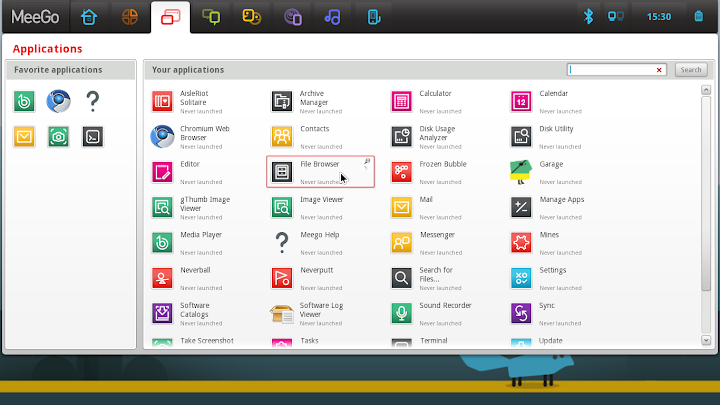 Above is the "Applications" screen, which includes quite a few improved icon symbols. To add an item to your favorites, just click the push-pin in the top right corner of the box that appears when you mouse over the item. This will not only add it to the favorites list at the left side of this screen, it will also be added to the box at the bottom left corner of the home screen.

Another thing I learned while preparing this write-up, in the "Devices" screen: 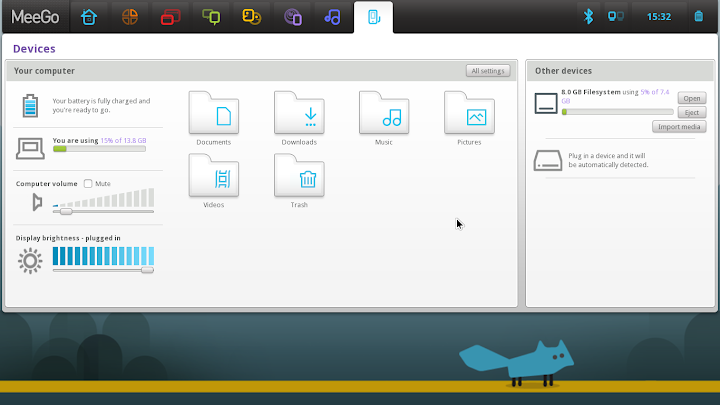 This is a screen which has improved, both in appearance and functionality, with every release of MeeGo. Here you get a quick overview of your hardware state - battery, disk usage and volume - access to the most common folders in your home directory, and access to any removable devices you may connect, such as USB Flash Drives. Pretty nice.

Finally, the "Networks" screen contains status and controls for whatever network interfaces you might have: 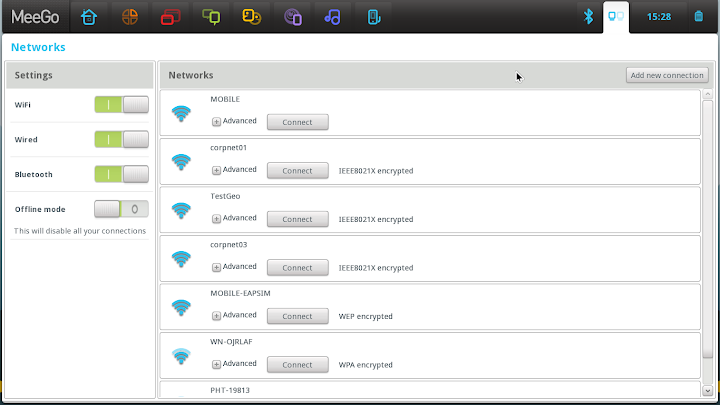 That's a nice, clear, simple list of available wireless networks, including their important characteristics, signal strength and a convenient "connect" button. I particularly like the toggle switches at the left side of the screen, where you can easily turn on/off individual interfaces, or you can hit the "Offline Mode" switch to cut off everything. Also nice.

Ok, so the bottom line is that this is still not my favorite distribution, and it almost certainly never will be. But it is getting better with every release, and for its target market of mobile devices such as tablets, smart phones and embedded systems, it is looking quite good. In all honesty, if I were forced to choose between MeeGo 1.2 and Ubuntu 11.04 for use on a netbook, I'm not at all sure which way I would go.

P.S. There are STILL no Shutdown/Reboot/Logout/Suspend buttons! The only way to shutdown is by pressing the power button on the netbook. Bleah. For reboot, it seems to me that Ctrl-Alt-Del works sometimes, but certainly not always, and I don't understand when it does or doesn't. Gosh, with all the other stuff on that screen, and the hieroglyphic symbols for everything, you'd think they could slip a shutdown menu in there somewhere!