Some believed Windows Update was hacked or compromised.
Written by Zack Whittaker on Sept. 30, 2015

Microsoft confirmed Wednesday that a suspicious-looking update pushed out to Windows machines globally in the early hours was nothing more than a test gone errant. 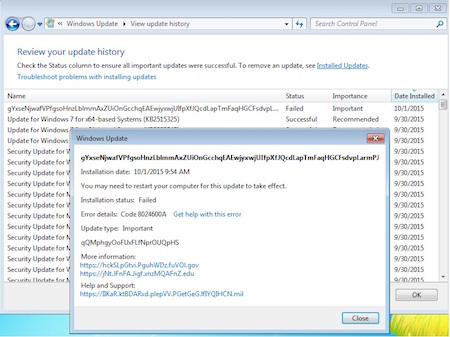 A spokesperson said that the company had "incorrectly published a test update" and is in the process of removing it.

It follows an hour or two of brewing concern on social media, forums, and news-sharing sites that the Windows Update service had been compromised in some way.

The "important"-rated patch, appeared on Wednesday as a supplemental language update, rather than a security fix.

The patch was 4.3MB in size, according to a thread on Microsoft's support forums, and contained gibberish text for its name, description, and strange and inaccessible links in the "more information" and "help and support" part.

In most cases, the patch failed to install. In one case, a user said after the successful installation, his laptop was "screwed," describing frequent crashes and that it "killed my system and compromised my gear."

It's not immediately clear what was inside the patch, or whether it modified any Windows files. In any case, the Windows Update system is a core and vital part of keeping computers around the world up-to-date. Shaking confidence in that system is going to have a lasting effect, especially in a day and age of almost daily hacks and ongoing government surveillance.

We'll have more as it lands.