Microsoft at The Mall

Not surprisingly, the Microsoft Stores run on Windows. Over the last few months Apple has been switching from using Windows CE handhelds to modified iPod Touches for its EasyPay system in the Apple Store, where you don't have to walk up to a till to buy something.
Written by Simon Bisson, Contributor and  Mary Branscombe, Contributor on Dec. 3, 2009

Not surprisingly, the Microsoft Stores run on Windows. Over the last few months Apple has been switching from using Windows CE handhelds to modified iPod Touches for its EasyPay system in the Apple Store, where you don't have to walk up to a till to buy something.

The Microsoft Stores we visited on our recent road trip have a similar system, using a Microsoft Dynamics point of sale system running on Samsung Q1 UMPCs (although the Samsung branding is hidden by a cover with the Microsoft Store logo); instead of looking for a till, you look for someone in a colourful T shirt and tell them what you want to buy. They scan in the bar code, you swipe your credit card and sign on screen, they print the receipt and put your new Zune HD in a nifty vinyl bag with comfortable handles and a popper that you can re-use for grocery shopping. 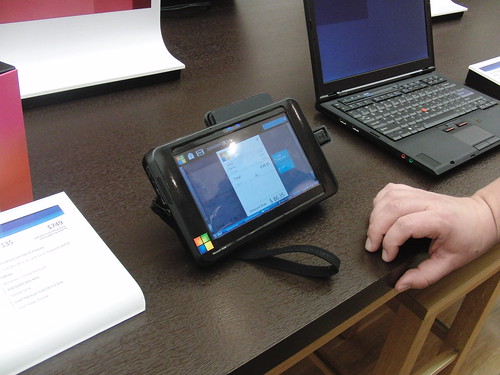 That's the theory; how well does it work in practice? In Mission Viejo, about 5pm on a Friday afternoon, the shop had about 20 customers in and after we'd told five or six friendly staff who asked if they could help that we were just browsing, the Store employee we turned to walked us over to a UMPC perched on the end of a table. The size of the Samsungs mean they tend to be sitting on a surface rather than being carried around; the built-in kickstand means you can see what's happening. First time around what was happening was that they couldn't log in to the POS, so we walked to another one - but we didn't have the same problem with the second system, or with two other purchases in Scottsdale.

The staff were just as friendly in Scottsdale, and in a helpful rather than creepy way; when I picked up an Anytime Upgrade pack for Windows 7, the nearest red-shirt asked if I knew it was just a code and didn't come with a disc. 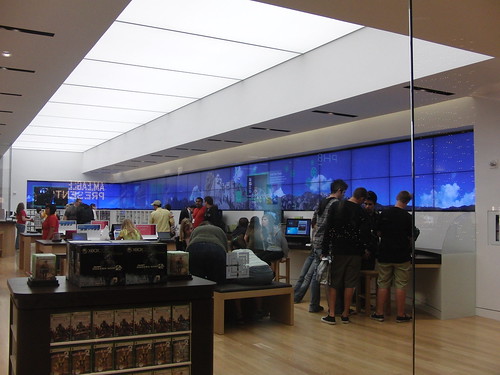 When I told him I was puzzled why it had a jewel case rather than just cardboard, which would be much easier to recycle, he said he'd wondered the same thing; "I'm new to retail," he told me, "so I asked at the weekly meeting". It turns out that cameraphones are so good now that you can now shoplift without leaving the shop: slit the packaging open with a blade, photograph the product code and put the box back on the shelf. I'm trying to imagine the average shop assistant at PC World displaying nearly as much interest in the sales process, but given that we spent half an hour in PC World today without being able to flag down anyone to talk to I suppose I might not have a basis for comparison…