Windows 10 users can look forward to seeing twice the number of ads for apps in the Start menu once Microsoft releases the Anniversary Update this summer.

The Start menu ads, or as Microsoft calls them Promoted Apps, haven't pleased everyone. It's the space on Start menu tiles that Microsoft allocates to suggested apps. But instead of the current five suggestions Microsoft is planning to increase that to 10 in the Windows 10 Anniversary Update.

Microsoft caused a minor uproar when it introduced the suggested apps feature in the Start menu in a Windows 10 preview last year. Microsoft said that app publishers did not pay to be featured and that it was to help customers discover new features and apps from the Store. 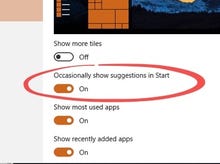 The latest "Fast Ring" Windows 10 build features ads in the Start menu. If you're not into such things polluting your Start menu, here's how you can make them go away.

According to Microsoft, in the current Promoted Apps setup, two of five of the apps are actually installed while three look as if they come with Windows but are in fact just links to apps in the Microsoft Store. A Candy Crush gaming app is one of the apps that is actually pre-installed.

To make way for the five additional Promoted Apps, Microsoft is reducing the number of "static apps" from 17 to 12. As Neowin notes, static apps are stock apps that are pinned to the Start Menu by default.

According to Microsoft, these changes will make it easier for its hardware partners to maintain and deploy Windows 10 PCs. Also, as with the existing Promoted Apps, users can uninstall them.

Still, while some users might find more of Microsoft's suggestions helpful, others are likely to be annoyed by its tampering with the Start menu.

Other changes Microsoft is planning for the Start menu in the Anniversary Update are aimed at making it easier to use. A proposed redesign will make the All Apps list always present on the Start menu rather than hiding it behind an All Apps icon.

It remains unclear whether all versions of Windows 10 will eventually see the Start menu changes or just new installs. Microsoft has been contacted for clarification.