My verdict: Nexus One raises bar but isn't quite "Super"phone

I'm seated here at a press event at the Googleplex in Silicon Valley. We're expecting news on the Android front, presumably details on Google's own Android phone, called Nexus One. Check back here for updates. I'll be updating this post live as events are revealed.

10:05 am: We're getting started with a welcome. Today, Google is unveiling next stage in evolution in Android. But first, a history of how we got here. Open Handset Alliance was meant to foster innovation on mobile when it launched back in November 2007.

A year later, there was T-Mobile's G1 phone - but that still wasn't enough. The company wanted a thinner device. soft keyboard and widgets for the home screen - and the MyTouch for T-Mobile was born. But still, that wasn't enough. CDMA support was added. and there were new enhancements to the hardware.  Now, Android is on 20 devices with 59 carriers in 48 countries and in 19 languages.

In 2009, there were four major software releases. Android today is contributing to more and more users accessing the Web from their mobile phones. In fact, Google has seen 5x mobile searches than previously.

10:15 am: Now, it's time to shift to next step in Android evolution. It's been a great year but no big celebrations yet. These are just the early stages of Android. There are some great devices out there running Android - and the company rattled off a few: the Droid, the Cliq, the MyTouch. But the company wants to do more.

What if the company worked even closer with partners to bring devices to market to showcase "very very quickly" the software.  Today, the company announces the Nexus One, the device where web meets phone. It's part of an emerging class of phones called "SuperPhones," the company said.

The Nexus One was designed in close partnership with HTC - a company that has taken risks and bet on Android phone from beginning. Now taking the stage: HTC CEO Peter Chou.

10:20 am: Now, we're hearing more about - and seeing - the Nexus One. It's slim and sleek and fits well into the hand. It pushes the limits of what's possible on a mobile phone today, Chou said. The combination of Google's software and HTC's hardware design makes this a "groundbreaking product" for the two companies.

10:23 am: Now, it's time for a closer look at the software, as well as some additional hardware specs. Erick Tseng, senior product manager, takes the stage. First, the hardware3.7 OLED display, which provides deep contrast and rich colors. Under the hood is a Qualcomm Snapdragon 1GHz processor, something Tseng called "really fast," especially when you start running multiple apps. The device also comes with a multi-color notification LED trackball - yes, to help you navigate the UI but also to notify users of new mail, messages or incoming calls. It also has GPS, an accelerometer. It also comes with a light sensor, which allows for adjustments for power savings. A proximity sensor dims the phone as it's raised to the ear.

The profile is slim - 11.5 mm thin, about as thin as a pencil. It weighs 130 grams, about as much as a keychain swiss army knife. It also comes with 5 megapixel camera with LED flash. On the audio. it comes with stereo bluetooth and a 3.5 mm headphone jack. Something new with this device is Active noise suppression. With two microphones, the engineers are able to adjust the experience by cancelling out background noise.

Finally, there's a metal bezel wrapped around the phone - a nice look, but there's an open space for some engraving.

10:30 am: Now, on to the software innovations. Nexus One is running on Android 2.1, the latest update. The apps and features from Droid - such as Google Maps navigation or one-click Facebook integration - can be found in the Nexus One. But there are new features, too. The Nexus One now has five home screen panels (instead of the previous 3) for more customization with room for additional widgets.

Tseng is showcasing a new weather widget that's far more advanced than previous offerings, building on GPS to know where the user is, for example. As a side note: this is a nice app and an example of how Android could really challenge Apple and its iPhone App store. The look and feel of widgets on a big full screen is a nice experience.

On to media and 3D technology. The static wallpaper screen is now dynamic - Tseng shows a lake scene and taps it to create ripples in the water. A natural home for the 3D experience is the photo gallery app. There's a new visualization for photos, utilizing technology that allows users to view their photos in a fun 3D way that gives some depth perception to the photos. There's definitely some powerful processing going on under the hood to power these features.

Last area of innovation for Nexus One is around voice. The company wanted to take voice to the next level. The search by voice feature has been around since the beginning of Android and later, on Droid, launched voice commands.  A very cool demo: Tseng says "Navigate to IKEA" and the phone, using GPS, finds the closest location and launches navigation. With Android 2.1, the company is offering voice technology for every text entry form.  A demo worthy of applause: a voice-recognized e-mail reply that worked seamlessly. Nice.

But wait: a secret surprise. Here's a sneak peek at the Google Earth app, which is not yet released. If you've ever played with Google Earth on the desktop, this is not much different - which is impressive on its own. The zooming, the panning, the "flying" over mountains is all very good - and it's available on the phone. Even voice technology works in Google Earth. Tseng said "Mt. Fuji" while in Google Earth and... yeah, you guessed it.

10:45 am: The Nexus One is the first to come in this SuperPhone category. But, how does the product come to market? A new way: through a Google-hosted Web store. Objective of Google's new consumer channel is to help users select an Android phone for them. A simple ordering process. A simple way to shop for plans. Can buy with service or without. With service, the device will be discounted and comparable to others.

Today, at google.com/phone, users can purchase a phone with service from T-Mobile - but there's more coming. The store is going live as I type this. 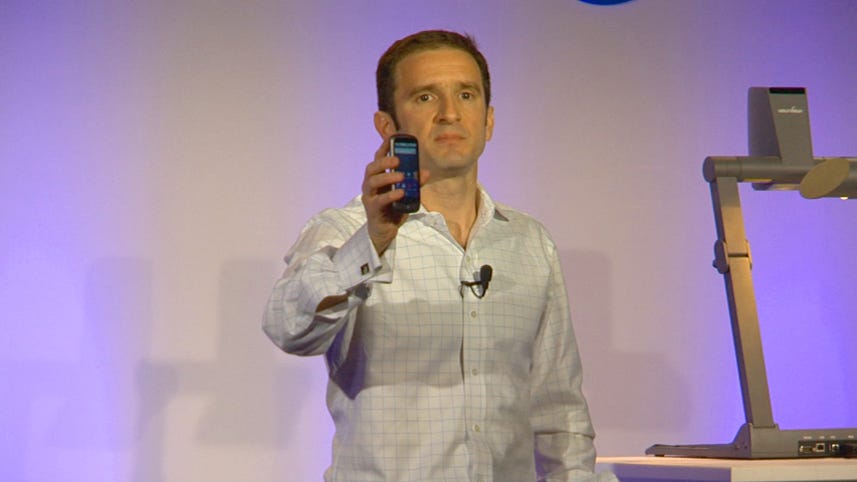 10:49 am: Now, we're looking at some screen shots of the Google Phone store. Here's the order page: $529 for a Nexus One phone without service OR, with T-Mobile, it's priced at $179. This Spring, Verizon Wireless for the U.S. and Vodafone for Europe will alongside T-Mobile.

Here's something: to buy a phone, you need a Google account (already done if you have a Gmail account) and it uses Google Checkout to process the transaction.

10:54 am: Here comes the recap, which tells us that things are winding down. We're watching a Nexus One video now and then it's time for Q&A and demos.

11:00 am: Here's the question for everyone: Is this an iPhone killer? The answer is that it isn't about the iPhone but rather about consumers. Choice is good, they say. Nice way to dodge the big question.

My question: What about tethering to a PC? Not yet, it seems. That's something the company is looking at for the future but, for technical reasons, it's not available yet.

Today's superphone is tomorrow's smartphone and Google says it will continue to raise the bar.

Google will make a slim margin of revenue from phone sales but that's not why it's doing this. Google is still an advertising company.

Google doesn't seem to be undercutting its partners with its own Web store. Instead, it's creating a Web-based purchasing experience. A testament of that is the presence of HTC's CEO on stage and Motorola's co-CEO Sanjay Jha, who was stuck in Silicon Valley traffic and missed most of the event.

Someone called out Google and called its pricing "boring" and not so revolutionary. But Google counters back that this is just one step in a long journey for Google and Android in the mobile space.

What is the differentiation between smartphones and superphones? The difference is the evolution of the platform and the openness of the ecosystem, as well as the processing power, differentiates it. The company says this device is as powerful as a laptop of a few years ago. The superphone category is something Google came up with to take it to the next level.

Android marketplace, not Google Web store, is where you buy Android apps - now about 20,000 strong.