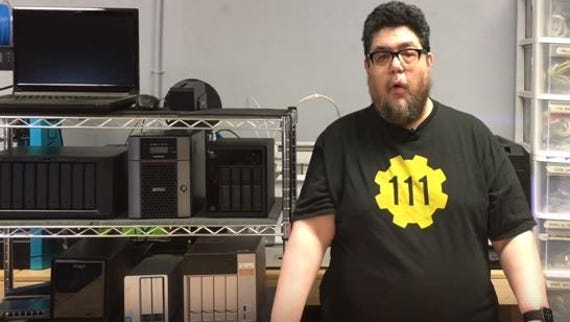 I've subjected each candidate machine to a series of torture tests. Beyond that, I look at performance, apps, user interface, and so much more. This week, we're testing the ioSafe 1515+.

Here's the deal with the ioSafe. It's basically a Synology NAS, hardened for battle. ioSafe licensed Synology's spectacular DiskStation Manager software to drive their system. As a result, it had identical results to the Synology, all across the board. The main difference is that the ioSafe is designed to withstand fire and flood.

Some of you asked me why the ioSafe wasn't on the wire testing rack with the other NAS boxes in my videos. That's because it bent my rack and I had to scavenge a new shelf. Yeah, it's 57 pounds of brute force protection. Instead of on a wire rack, it's been living on my workbench, sitting directly above a steel support leg. It's a beast.

Let's discuss test results. Upon inserting the bad drive, it took approximately 8 minutes for the ioSafe to boot and begin beeping. It was difficult to tell which drive failed (other than a slightly more rapid LED blink), but there was an audible alert.

Email notification was easy. A message sent through Gmail worked perfectly. Like the Synology, the ioSafe also supports SMS notifications.

The ioSafe also easily passed Test 2, rebuilding an array from a mismatched drive. It required a few clicks in the management interface, and the new drive was up and running. It also smoothly passed Test 3, growing over time. It allowed the array to reallocate space, providing for a larger capacity as bigger drives are added to the array.

Overall, like the Synology, the ioSafe got a 4 out of 5 for RAID performance.

Because the ioSafe is designed to handle fire and flood, I got the brilliant idea of doing some sort of amateur Mythbusters thing, and figured I'd take the box out to my backyard fire pit and try to blow it up or burn it.

That idea got squashed pretty immediately both by my wife and the town fire department. Both felt that I'd be a danger to myself and others. They're probably right.

But that doesn't mean I can't bring you some fiery performances. Courtesy of Julian Sanders at London Drugs and Trevor Pott at The Register (who clearly had a much better time than I was allowed to have), I've some great burn footage in the accompanying video.

As I've done in all the previous reviews, I'll run through the usability and performance details. This time, though, I'll talk you through the results while you watch an ioSafe box torched, drenched, and recovered.

In our last NAS review installment, I said that Synology sweated every single pixel and every single design decision to create the clearest, cleanest, and most usable interface I've seen on a NAS. Everything works, everything makes sense, and everything is predictable and consistent.

This applies fully to the ioSafe NAS, as well, because ioSafe licensed the same Synology software. The exceptional design continues through the entire DiskStation Manager interface. In addition to the design, responsiveness of the interface is crisp. There's no sluggishness here at all.

This box has a well-designed network recycle bin. Even though the aggregate speed benchmark was right in the middle of our seven contenders, everything else about performance and usability for the ioSafe is top-notch, earning it five out of five stars.

The one gotcha about the ioSafe is that it's roughly three times more expensive, on a price-per-bay basis, than the Synology. It's our most expensive NAS, clocking in at $380 per bay.

On the other hand, no other NAS we tested could survive being used as a heat source for grilling hot dogs. The fact is, if you want a hardened box, the extra cost of the ioSafe is worth it.

With a four star review in our RAID torture test, and a perfect five stars in performance and usability, plus the astonishing show of survivability shared with us by Julian and Trevor, the ioSafe 1515+ RAID scorches with a smokin' hot five out of five overall score.

That's the end of the individual NAS reviews, but this series isn't over yet. Many of you have been clamoring for some details about test methodology and a face-to-face summary of all the boxes tested. That's what's coming next. Stay tuned.