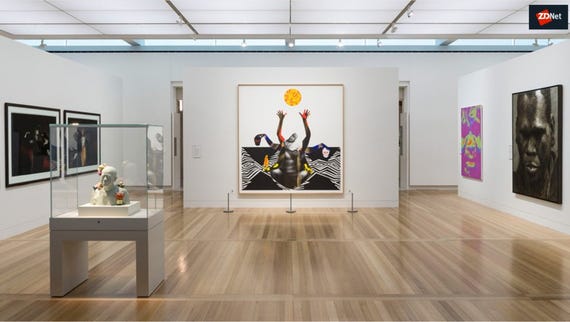 Established in 1998, the National Portrait Gallery in Canberra boasts a collection of 2,500 portraits of prominent Australians. The gallery attracts around 450,000 people annually, with a further 80,000 visitors attending its travelling exhibitions.

As an important historical repository of Australia's past, the gallery's chief operating officer Trent Birkett said that the federal government agency needed a complete overhaul of its IT environment to handle the needs of its staff and its visitors -- both online and in person.

As a government agency, it is part of the gallery's mandate to digitalise its collection and make it available online. And with visits to the gallery's website now outstripping those to the physical site, Birkett told ZDNet it was important to provide online viewers with speedy access to the gallery's image library.

"We're getting over half a million visits to our website each year ... by having a website with the collection available, with a fast download, it gives people that opportunity to be able to browse through the collection, read the stories, and watch some videos," he explained.

The National Portrait Gallery is a standalone agency that is only three years old. Previously, its IT infrastructure was provided by another government department, but about 18 months ago, the agency providing it relinquished its responsibility.

A blessing in disguise, this meant Birkett could look for a solution that also solved the gallery's heavily restricted internal environment -- they couldn't even price up food and beverages for events without asking for access to each individual site from system admins, or collaborate with third parties for exhibitions using software such as Dropbox.

"It prevented us from doing a lot of the stuff we wanted to do," he said.

In preparation, the gallery went to market about two years ago to find a solution that integrated all of its needs: A modern, fully-managed IT environment to digitise, store, and make available its catalogue of portraits to a wider audience.

The National Portrait Gallery ended up with a hyperconverged solution, consisting of Lenovo x3650 servers in a metro cluster configuration, running virtual SAN software from DataCore.

The IT infrastructure was built from the ground up with local IT consulting firm Vintek, and now hosts applications including the National Portrait Gallery's customer relationship management software, SQL/Web based apps, and file and print servers in a VMware environment.

Glen Lance, Vintek ACT state manager and the project's technical lead, explained the rationale behind choosing a software-defined environment was that it reduced the number of active equipment and allowed the use of a hyperconverged platform.

"We saw that the gallery used images a great deal, so it was no good giving them a slow storage solution as when people wanted to load things up it was taking ages," Lance explained.

"Giving them DataCore sitting on a hyperconverged environment means that digital images are passed around the staff very quickly, they're moved to the web page quickly, and the opportunity is that if we need to upgrade it, it's just a few additional hard drives -- with the licence granted for the next five years."

Although they looked at the cloud, Lance said that as the gallery is running 10GB networks to its staff -- now running on low latency, high-speed switches -- trying to download a 50GB image over the network from a public cloud would be very slow, in comparison to the speed achieved from the Metronode datacentre nearby.

Lance also said the new setup gives the gallery ownership of its own environment, which it didn't have previously.

Since implementing the digital framework, the National Portrait Gallery is developing iPad applications for visitors to use as they walk through the gallery.

With near real-time update from the gallery's corporate environment to the applications and its website, visitors are able to walk around with an iPad and be able to have a full relationship with the gallery -- as well as a digital one -- which Birkett said isn't present at many other galleries in the country.

Another positive feature from the IT overhaul included the reduction of image duplication, as well as cutting the lengthy process the gallery previously had undergo to have its images digitised, which saw the gallery send hard drives of images -- that it in turn could not access -- to a third party. The gallery ended up with duplicates in varying resolutions.

After speaking with other Commonwealth agencies, Birkett said it's clear the gallery is ahead of others when it comes to a digital transformation. Considering its size, he said he considers the National Portrait Gallery to be in a "really good position".