A common criticism of modern 'social' interactions online is that they are just that: superficial socializing to idle away the time.

It's a view often held by people with little or no experience of actually interacting through the modern mediums which are now an integral part of mainstream broadcast media.

Twitter has quickly taken center stage in US TV news broadcasting for example, with 140 character comments a perfect typographic fit for news screen political opininons. 2011 is a year where Facebook, Twitter et al have hit mass familiarity, and they appear to be everywhere, as this Facebook Plaza San Martin place name sign in the center of Buenos Aires Argentina illustrates. 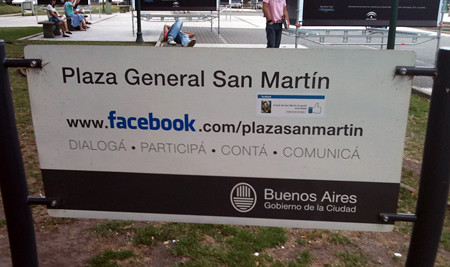 The Twitter video of New Year tweets cascading around the planet at the top of this post illustrates the sheer volume of traffic through this new medium. A couple of years ago this would still have been a revelation about our new ways of communicating, but now it illustrates the sheer volume of activity, presumably in this timeframe all saying pretty much the same thing.

Just four seconds after midnight in Japan on January 1st, Twitterers set an all-time record in the number of Tweets sent per second (TPS). At that moment, the world sent a staggering 6,939 TPS wishing friends and followers a fond “Akemashite omedetou gozaimasu” (“Happy New Year!”).

I'm sure Skype, text messaging and long distance telephony and  other methods of connection set similar usage records at the New Year hour as it progressed around the planet.

How you spend your leisure hours outside work interacting with friends, followers and fans, and now 'liking' people and things within your social graph is entirely on your terms and in your personal time frame. Consuming peoples perspectives through television 'retweets' is of course very different to participating yourself. Television news reporting is all about finding and disseminating information and perspectives of course, so there is financial value in broadcasting pertinent tweets instead of going to the expense of recording voxpop 'man on the street' opinions.

Putting aside the timeless issue of people's personal and social lives encroaching on work time, organizing groups of employees to better interact and collaborate around work continues to be hugely challenging in light of these newest personal ways of interacting. Social networking has a reputation, partly based on trends that predate the internet, as being for people who 'aren't working but networking' - finding and flipping information, gossiping and generally hustling to look good in the moment.

There will always be employees who are far more adept at this type of career advancement than getting their heads down and producing substantial bodies of work, although to be fair researchers, sales intelligence and marketing roles as examples require sophisticated skills around finding and disseminating knowledge.

Apple have had enormous financial success centered around mass market  'i' products expressly designed to celebrate you as an individual. Starting with the iMac, a clever play on the term 'personal computer' (pc) they then destroyed Sony's bizarrely named Walkman with the iPod and of course have gone on to dominate mobile with the iPhone. The iPad is a whole new success story and is extremely popular with executives, who are used to succinctly presented information flowing to them for consumption from their underlings. (The iPad has a terrific user interface for consuming and giving intimate presentations to small groups of people).

This 'it's all about me' iMarketing, combined with the challenges of filtering the tsunami of information we contribute to and consume continues to color perceptions of what paid work and deliverables are. We all naturally want to gravitate to the more glamorous 'ideas and insights' work elements over head down efforts to produce a body of work, which individuals typically want to retain tight control over.

Encouraging individuals to share information where needed instead of hording their knowledge is deeply influenced by the internal culture of a business, but increasingly now also by the behavior of their colleagues on the broader internet. Creating an environment which nurtures social cohesion is heavily dependent on whether the information an individual creates gets appropriated by others to obtain unattributed recognition and credit.

Modern technology makes this extremely easy in the timeless 'knowledge is power' game, and can be a historical amplification of unscrupulous managers stealing ideas and credit from underlings and other hierarchically corrupt behaviors.

The German sociological categories 'Gemeinschaft'  and 'Gesellschaft' were introduced by German sociologist Ferdinand Tönnies around 100 years ago for two human condition types.  'Gemeinschaft' refers to groupings of people based on their feelings of togetherness and their mutual bonds towards a common goal. (This can be loosely translated as 'community' in English). 'Gesellschaft' means loose groups that are sustained by being instrumental to their members' individual aims and goals, ultimately over each other, and can be simplistically translated as 'society'.

Without getting too deeply into sociology there is great friction between these two social categories within modern collaborative technologies. The sheer volume of activity in a world which has lost its social innocence online means the work rat race has well and truly moved into the cloud.

Just as debt collectors trawl social networks for evidence of financial activity by debtors, and robbers infiltrate services such as Tripit and Dopplr to find empty homes, intelligence gathering across the internet makes your individual channel choices for sharing information all the more complex to obtain given goals without over exposing your valuable career attributes.

The choices around how to work together, what to share and through what channels for appropriately sized working groups within companies and with their partners is a complex strategic challenge I'm constantly dealing with behind corporate firewalls professionally.

Like the sheer volume of online information/noise, efficient business communication, collaboration and information dissemination can be compromised and rendered inefficient by too many undifferentiated channels and collaboration silos.

Giving everyone their own personal water cooler conversation area doesn't scale as Twitter demonstrates - unless your job is monitoring Tweets - but organizing expectations around task completions for employees that incorporate efficient ways of collaborating on a level playing field has never been more important for strategic advantage. This is true on both a personal level and a corporate level.