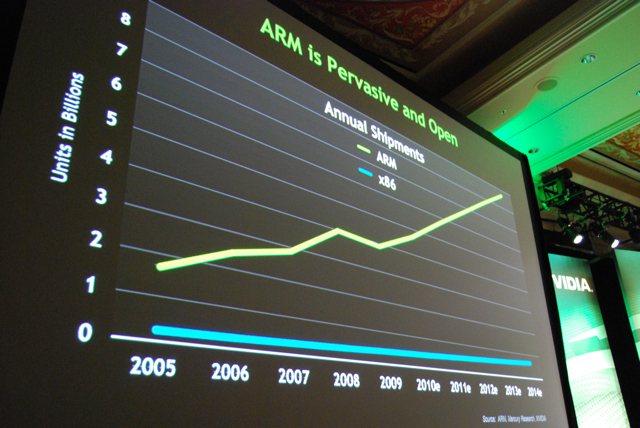 The project -- until now called "Project Denver" -- is the company's first foray into CPUs.

"ARM is the fastest-growing CPU architecture in history," Nvidia CEO Jen-Hsun Huang said. "This marks the beginning of the Internet Everywhere era, where every device provides instant access to the Internet, using advanced CPU cores and rich operating systems.

Specifically, the project will materialize as an Nvidia CPU running the ARM instruction set, which will be fully integrated on the same chip as an Nvidia GPU.

Nvidia says it obtained rights to develop its own high performance CPU cores based on ARM's future processor architecture; in the meantime, the company has licensed ARM's existing Cortex-A15 processor for its Tegra mobile processors.

At the press conference at the 2011 Consumer Electronics Show, Huang made several key points about his company's big bet on ARM:

This post originally appeared on ZDNet's Between the Lines blog.