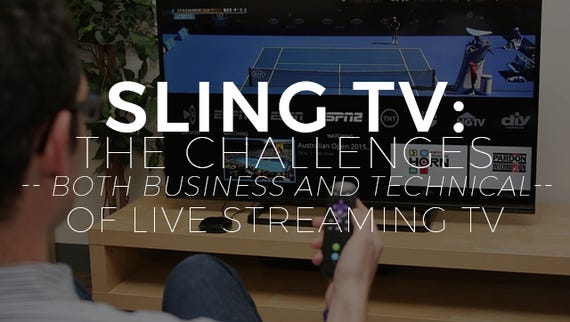 Pondering an Apple entry to the TV market: Do you need live TV, sports?

An Apple HDTV could be powerful. However, live television and set-top boxes would pose a big hurdle for Apple as it tries to be the hub of your digital living room.

Last spring, I was watching my two college basketball teams, West Virginia University (WVU) and the University of North Carolina (UNC), in the NCAAs. I kept jumping between streaming games withYouTube TV and Sling TV and cable-carried games on Charter/Specter. A big difference quickly became plain. The streaming games were up to 30 seconds behind the cable cast games.

Why? It's because streaming video is chopped into 10-second chunks. Your Roku or other streaming device usually wait for three segments to arrive before playing them for you. That's fine for watching Better Call Saul. It stinks for watching a last-second fast-break when your friend calls to offer his congratulations before you see the end of the game.

Limelight Networks thinks it has the answer: Limelight Realtime Streaming. The company promises that it can eliminate long delays and enable producers to stream live video from anywhere in the world to anywhere in the world in less than a second. This will provide online viewers with the same experience enjoyed by broadcast viewers.

Technically, the internet-streaming problem starts with HTTP streaming formats, such as MPEG-DASH and HLS, which break the video into small segments that must be buffered before playback. You can reduce the size of the chunks to minimize the delay, but that has led to video buffering and other playback issues.

Also: How to capture and stream live training videos TechRepublic

Ironically, the eternally insecure Adobe Flash was better at streaming. But, as the joke goes, it's a good day when you don't have to patch Flash. In any case, few streaming providers still use Flash, and Adobe is ending Flash support in 2020.

Limelight's answer is the open-source WebRTC technology, which delivers reliable, broadcast-quality, real-time video streaming over the UDP data transfer protocol. WebRTC started as a protocol to deliver reliable and fast real-time communications for web browsers. It's supported by all the major browsers, except for Internet Explorer (IE).

A few years later, open-source WebRTC servers, such as Kurento, started to appear for small-time video-streaming jobs. Now, Limelight is taking the next step and using WebRTC to deliver production video streams for its customers to their millions of viewers.

Limelight promises that its WebRTC implementation will bring live-streaming video down to one-second delays. That makes its faster than satellite and close to cable and over-the-air transmission speeds.

Other CDNs, such as Akamai, have tried to cut down latency, by improving how it handles segments. Akamai, for example, is bringing its streaming delay down to 10 seconds. But 10 seconds is still a lifetime in sports.

Limelight has more than conventional sports broadcasting in mind for its technology. These include:

In a statement, Limelight CEO Bob Lento, said, "By combining the lowest latency real-time video streaming and data, Limelight is making online viewing experiences more interactive. Limelight's R&D team has solved the complex problem of delivering sub second latency live video and data, globally, at scale. This integration opens up a world of possibilities for how viewers can interact with each other and with content distributors. Many industries can benefit from this capability, and we expect to see a new generation of immersive, low latency, content-rich applications driven by Limelight Realtime Streaming."

Also: Which streamer should you buy? CNET

Limelight isn't the only one that thinks its WebRTC streaming could be a game changer. Lukas Seiler, managing director of Audiovisual at SportRadar, a leading global provider of sports data intelligence, said: "With Limelight's new service, we can provide reliable, high-quality, real-time video streaming to viewers anywhere in the world."

Since WebRTC is open source, I expect other CDNs to follow Limelight's lead. This means that, perhaps just in time for March Madness 2019, we will be able to stream the games in real time.

Join Discussion for: Online sports are about to get actual real-time...