It has been a long development cycle, with a lot of very hard work by the developers, leading to the release yesterday of openSuSE 12.1.
Written by J.A. Watson, Contributor on Nov. 17, 2011

It has been a long development cycle, with a lot of very hard work by the developers, leading to the release yesterday of openSuSE 12.1. As I have mentioned a few times here, I have been following the development since the early milestone releases (2 or 3, I can't remember which), and I have been actively using it since milestone 5. The Release Announcement gives a good overview of what's in the new release; the Release Notes contain a lot more detail, with links to additional information in their Wiki.

In my opinion, the developers hard work has really paid off, this is an excellent release. It is available in KDE and Gnome3 LiveCD/USB images, and a (very large) DVD installer image, in 32-bit (i686) and 64-bit (x86_64) versions. If you want something other than a KDE or Gnome desktop, you can install from the DVD distribution, and get the latest Xfce or LXDE desktop. I have installed the KDE version on my laptop at home, and on several netbooks, and the Gnome version on another netbook, and it all went very smoothly. (Note: HP 2133 Mini-Note users, see below for a couple of special tips)

The are plenty of articles and reviews around right now, so I won't slog through all of that again (ZDNet US for example). I will concentrate here on the installation, configuration and compatibility with the systems I have tried so far. I have downloaded the KDE Live image, in both 32 and 64 bit versions, and the Gnome 64 bit image. The ISO can be copied to a USB stick from any running Linux system using dd; if you don't have a Linux system handy, the openSuSE Download Page contains a lot of helpful information and links for how to burn a CD, create a USB stick and generally get through the installation (look near the bottom of the page, after the download links).

The first thing to say about installation is that I don't think openSuSE gets enough credit for the speed and quality of their installer. It is nicely designed, it doesn't natter at you about a lot of unnecessary information, and when it gets down to the actual work of doing the installation, it is amazingly fast. I would estimate it at about 5 minutes to walk through the installer and answer the questions (considerably less for experienced users), 5-10 minutes to actually copy the live system to disk and boot it, and 5 minutes for the first boot and configuration of the installed system. Add a bit to that for the download of the ISO image (depends on the speed of your Internet connection, probably something between 2 and 5 minutes), and a few minutes to either burn a CD or copy to USB stick, and you can realistically expect to spend about 30 minutes getting openSuSE installed and running. That's pretty impressive.

The standard KDE 4.7 desktop is pretty familiar by now. Here it is, with the application menu open: 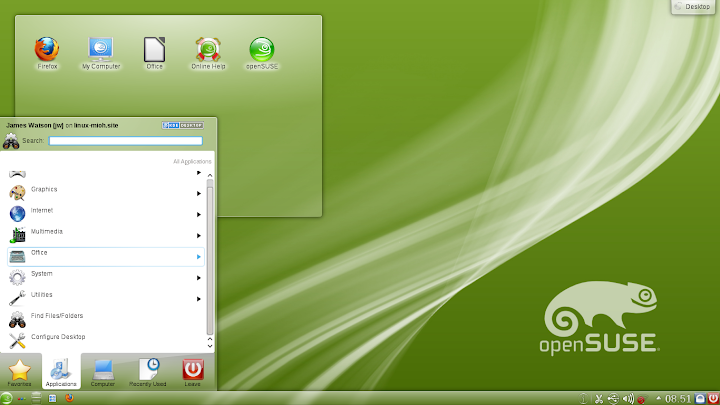 Of course, I never miss the opportunity to mention that when you set up a system with KDE 4, you get the excellent KDE Plasma Netbook desktop in addition to the standard desktop. All you have to do is go to Configure Desktop, Workspace Behavior, Workspace, Workspace Type and choose Netbook, and then Apply. What you will then get looks like this: 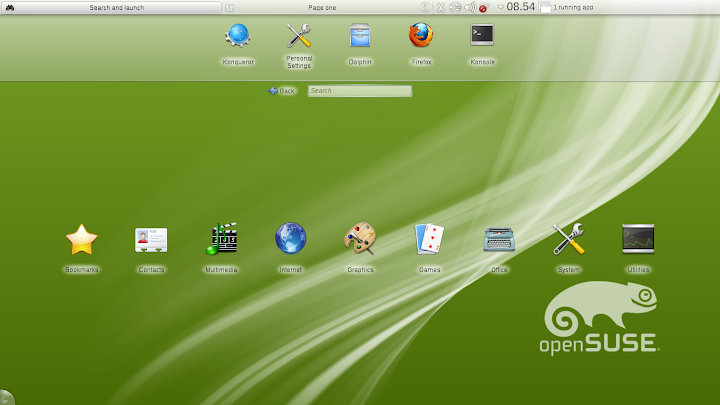 That is still my favorite netbook desktop, and I would say that the smaller and lower resolution your screen gets, the more benefit you are likely to get from the KDE Netbook desktop. It improves with every KDE release, both because they continue to work out bugs and add new features in it, and because they are continually improving Kwin which makes it work smoother and faster.

If you choose to install the openSuSE Gnome3 distribution, you will end up with a desktop that looks like this: 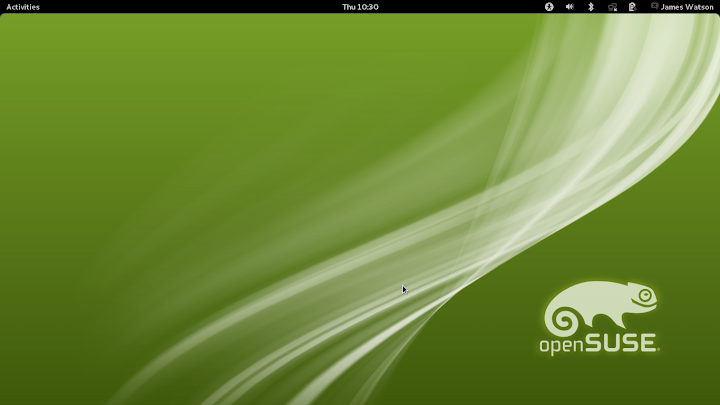 That's a very standard (and very boring) Gnome 3 desktop. Click on the "Activities" menu in the top panel, or press the "Windows" key, or just slam the mouse into the top left corner of the screen, the select "Applications" and you will get this: 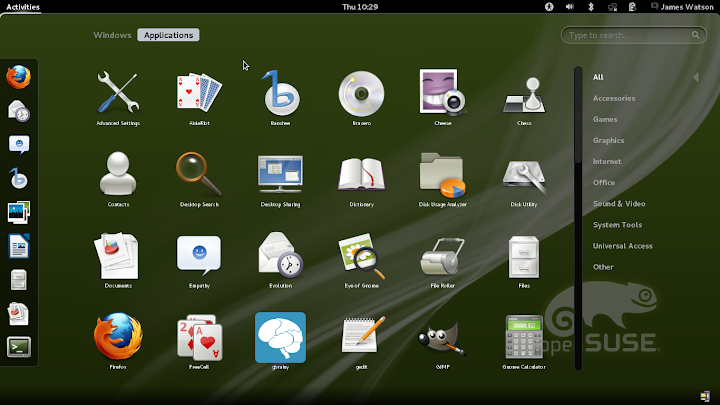 There you can see the Favorites at the left, the full list of applications in the middle, the application categories at the right, and an application search input at the upper right. You can compare this to the KDE menu screen above, which contains essentially the same major parts.

Ok, that's what you get - but what was it like getting there on my particular systems? Well, in a nutshell it was amazingly easy. Here are the systems I have done so far:

- Samsung P-580: This is a notebook with 15" screen, Intel Core i5 CPU, Intel HD graphics and Atheros WiFi adapter. Notebooks don't get much more "standard" and unexciting than this. The installation was easy and amazingly fast, openSuSE detected, recognized and configured absolutely everything, even when I installed it with the laptop in the docking station with a second display, external keyboard and mouse and wired network connection. Everything worked, right from the start. Just wonderful.

- HP Pavilion dm1-3105ez: This is an "in-between" mini-laptop/maxi-netbook, with an 11.6" screen, AMD CPU and ATI graphics, Ralink WiFi adapter and the dreaded Synaptics ClickPad touchpad. The only surprise here was how easily openSuSE installed and how well it all worked. One of the problem areas until now, the Ralink WiFi adapter, is now supported in the Linux 3.1 kernel, so that came up with no problem and no extra effort. The other even bigger problem, the ClickPad, works just fine, fully supported with left and right click, click-and-drag, and you can enable tapping and "disable touchpad while typing" if you want. I honestly don't know how the openSuSE developers do this, but they had also done it in openSuSE 11.4. I was concerned, because the ClickPad didn't work as well in the 12.1 pre-releases, but here we are with the final release, and it works great again. Very nice.

- Samsung NP-NF310: This is a high-end netbook, with a 10" screen with 1366x768 resolution, Intel Atom 550 CPU and GMA3150 graphics, and a Broadcom 4313 WiFi adapter. This was the system that I installed the Gnome 3 distribution on, and once again it was dead easy. There was one tiny glitch in the installer, if you choose "create a disk layout" the window is actually a bit too large for the screen, and you can't see the buttons at the bottom. But if you go through "modify disk layout" instead, everything fits and works just fine. Once the installation is done, everything works - unlike Fedora, which is still missing the Broadcom WiFi driver (hopefully it is on the way), or Debian, for which the driver is present but you have to download the firmware, with openSuSE when the installation is finished the Broadcom WiFi adapter is working.

- HP 2133 Mini-Note: This was one of the first generation of netbooks, and is considered quite "old" today, but it is still a very nice and very useful system. It took the most effort to install openSuSE on it, but then that has been the case with every distribution since I first got it. The hardware itself is rather unusual - VIA C7-M CPU, VIA Chrome9 graphics, and Broadcom 4311 WiFi adapter, for example. The first thing I noticed was that the LiveCD booted to a screen resolution of 640x480. Ugh. When was the last time you saw that? It turns out that the openchrome display driver is not in the base distribution, so it boots with the VESA driver, and that't the best it can make of the MiniNote's 1024x600 screen. You can probably slog through the installation at that resolution, but it would be like forty miles of bad road, so I decided to take a shortcut. After booting to the live image (not the boot install option), I installed the openchrome driver myself. This can be done two ways - either copy it from another Linux distribution (come on, if you have a 2133 and you're loading openSuSE, this is not your first Linux, is it?), Linux Mint Gnome has the same X.org version, for example, so you just need to copy over /usr/lib/*chrome* and /usr/lib/xorg/modules/drivers/*chrome*. Alternatively, connect a wired ethernet cable and go to the openSuSE Build Service, select the "Factory" distribution, search for openchrome, and use one-click install to do the job. Then kill the X server, or logout and log back in (do NOT reboot, as you will lose the driver that you just installed). Once you get that done, and the screen running at a reasonable resolution, the rest of the installation is very easy - you will find the "Live Install" utility on in the KDE Computer menu. The openchrome drivers that you installed in the Live image will be copied to the installed image, so the display should still be the proper resolution after reboot. However, after rebooting the installed system you will find that the Broadcom WiFi adapter is not working. You need to download and install the b43 firmware, and openSuSE has a script to do that for you. So connect a wired network cable temporarily, and as root (or using sudo) run /usr/sbin/install_bcm43xx_firmware. When that has finished you can reboot, and the wireless networking will be good. Everything else on the Mini-Note looks ok to me - sound, touchpad and such. As I mentioned above, I use the KDE Netbook desktop on this system, and it really is much more pleasant to work with than the standard desktops.

Whew, sorry, I didn't mean to go that long about the Mini-Note, but I really do love that little thing, and I hope that I can help others who have one continue to get the most out of them.

In summary I would say that openSuSE 12.1 is a very good release. It has arrived at an opportune time, since I was still a bit disappointed by my experience with the Fedora 16 release last week, and I still have the excitement of Linux Mint 12 coming up in the next few weeks. If you are looking for a very solid Linux distribution which will install easily and work well on almost any hardware you own, give it a try. You are not likely to be disappointed.