Apple returned its high-end Mac Pro desktop to relevance with its 2013 redesign and, unlike many of its other products, even made it fairly easy to upgrade. It's taken over a year, but a third-party company has finally taken advantage of that to offer the first DIY storage upgrade for the latest Mac Pros. 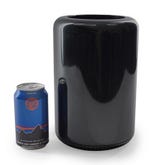 The Mac Pro teardown: Compact, yet easy to upgrade What makes the Mac Pro tick? The teardown team from repair firm iFixit have got their hands on a system hot off the production line and have taken it apart to show us how Apple has put together the ultimate workstation.

OWC (short for Other World Computing) has been a longtime purveyor of Apple peripherals and components, most recently including a Thunderbolt 2 dock. It's just launched its Aura line of solid-state drives (previously seen for MacBook Pros) for the current Mac Pro in 1TB and 2TB capacities. That could be a very necessary upgrade for owners of the Mac workstation, as the base configuration only includes a 256GB SSD. (Apple lets you double it for $300, or move to a 1TB version for an additional $800.)

The company touts that it has engineered its drives specifically for the Mac Pro and its unique design, which requires a custom blade form factor. OWC claims sequential read speeds of 730MB/s and writes of 698MB/s, with security features including 128-bit AES-compliant encryption. The Aura SSD line for Mac Pros come with a three-year warranty.

In order to install your new storage, you have to replace the original SSD Apple installed. OWC has figured out a way to keep that old drive viable by shipping the Aura with its Envoy Pro enclosure to turn it into external USB 3.0-based storage. It's the least the company can do, given that the Aura drives will be no cheap upgrade when they start shipping later this month. The 1TB version will sell for $899, while the 2-terabyte drive will run $1,479.

Then again, potential upgraders have already spent more than $2,500 for their Mac Pro. The new Aura drives could also help make Apple's workstation desktop more useful as a server system.

[Via The SSD Review]