Need lots and lots of fast storage for your 2019 Mac Pros, or your Windows and Linux computers?

OWC has you covered with the new Accelsior 8M2. This system leverages the total bandwidth of the latest PCIe technology, providing ultra-reliable speeds up to 26,000MB/s.

Each OWC Accelsior 8M2's eight NVMe M.2 SSD slots can run at their full x4 lanes of data throughput through an entire PCIe 4.0 x16 lane architecture with up to 64TB of storage.

All that performance generates a lot of heat, which is why the Accelsior 8M2 has been designed to offer superior heat generation.

"We are always trying to push technology to the limits, and with the OWC Accelsior 8M2, can be summed up in one definitive sentence," said Larry O'Connor, CEO and Founder of OWC. "It's the fastest, highest-capacity PCIe SSD in the galaxy." 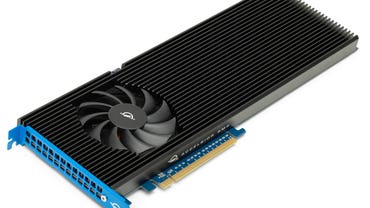 The real-world performance is out of this world: