By Zack Whittaker for Between the Lines | December 6, 2012 | Topic: BlackBerry

Research in Motion has launched its BlackBerry 10 Ready Program in a bid to help enterprise customers gain traction with the new platform, and help businesses prepare for BlackBerry 10 when it launches on January 30. 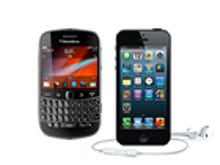 If BB10 upgrades are a nightmare, why not jump to iPhone now?

RIM is getting ready to help business upgrade to BB10 and BES 10, but if you need help to do it, why not just do something else instead?

The Canadian smartphone maker is offering a four-pronged approach to help enterprises get ready for the next-generation platform.

In doing so, existing BlackBerry customers will gain access to a "variety of services, information, tools and special offers" to ease the transition of moving to the newer platforms.

RIM senior director for enterprise accounts Bryan Lee told ZDNet that the BlackBerry maker has seen an "unprecedented level of excitement and anticipation" in the run up to the launch of BlackBerry 10 and BlackBerry Enterprise Server 10 (BES 10), currently known as 'Mobile Fusion' .

"What we are announcing today is a consolidation of all that information [RIM's next-generation platform technologies] into one place to help customers understand and prepare their environments for BlackBerry 10."

There will be a weekly BlackBerry 10 Webcast series in which customers can hop into and learn more about the platform in a variety of languages across multiple regions, in a bid to help enterprises answer questions about RIM's enterprise portfolio.

This tool will be made available to enterprise customers in January, the firm said.

RIM said it will offer customers with a "smooth migration path" to BlackBerry 10. The smartphone maker will be providing enterprises with change management and planning migration tools, along with application development services. These will be available in January ahead of the launch of BlackBerry 10.

(ZDNet's Matt Baxter-Reynolds has more on this.)

And, if customers complete all of the aforementioned steps -- three of the learning sessions, installing the new BES 10 software, and complete the client license trade-up program, North American enterprises will qualify for a new BlackBerry 10 device (one device per enterprise) upon the January 30 launch in order to test the device in their enterprise setting. RIM is pushing for other countries outside the U.S. and Canada before the January launch, however.

(It seems a little backwards; surely it would make more sense to hand over a test device in order to trial the new platform on the network.)