Full Bio
Posted in Technically Incorrect on May 15, 2021 | Topic: E-Commerce 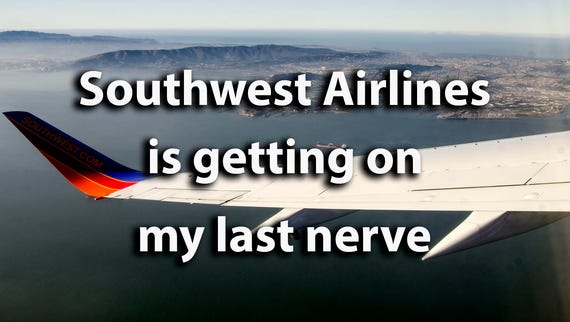 Southwest Airlines is getting on my last nerve (and they call this love?)
Watch Now

It takes work to be loved.

If you're a large company, that is.

Southwest Airlines has managed, for the most part, to turn it into an artform.

Its corporate attitude seems relaxed, even verging on the human. Its employees are often free to express themselves wittily. Even their planes have a certain democratic air, with no real snooty section separating the haves from the have-lesses.

Something, though, may have happened during Covid to shift the airline to a posture between cocky and galling. I confess it's been getting on my very last wick.


You see, I keep getting marketing emails from Southwest. Many airlines use this method. I've not seen any, however, that offer such blatant piffling nonsense, wrapped in a veneer of sloppy psychology.

It began last September. I received an email headlined: "$59 to Vegas is still in your cart."

When, then, could I have put a $59 Vegas fare in my cart? This couldn't have happened, especially as the idea of flying to Vegas in the middle of a pandemic was as appealing as swimming in an Irkutsk lake with Vladimir Putin.

I ignored the email, thinking that perhaps Southwest had got its Matyszczyks in a twist and the email was intended for some other non-related Matyszczyk.

You've Left Something Behind. Your Gall.


October, though, brought another mind-testing email: "$99 to Denver is still available."

But I still wanted to be forgiving. Perhaps this was merely a route that wasn't being booked and Southwest was desperate for anyone to get on the plane.

Thankfully, Southwest gave it a rest over Christmas and New Year. In March, though, the nonsense began again: "You left something behind: Panama City, FL for $103."

Would you believe me if I told you that I'd left nothing behind, that I've never contemplated voluntarily going to Panama City and that I do realize there's a Panama City in Florida?

Would you also believe me that this supposed trick of the mind had me of a mind to call Southwest and verge on the rude?

Instead, I kept these emails and only just opened them, months later. Inside, they offer no hint that I've left anything behind at all. They don't begin with: "Remember when you were thinking of flying to Panama City?" They don't have a cart with my Panama City flight nestling within.

I worry about the psychology of using technology to question a customer's sanity. Emailing a customer they did something when they manifestly didn't seems like the equivalent of me suggesting Southwest is entirely lovable when it really isn't.

The emails, you see, have kept on coming. Last month, for example: "You left something behind: Charleston for $78."

But all this was beginning to make me completely reconsider my feelings for Southwest.


You might think I'm being excessively reactive. (It wouldn't be the first time you've thought that, would it?)

Oh, if only you knew me better. I'm as placid as the Adriatic on a July evening. And I know that many other companies use annoyance in the belief that, in the end, you'll succumb.

But if a brand is lovable, I expect it to use e-commerce in as lovable a manner as its humans treat me on its planes. Here, it's more like: "Are you sure you didn't rob that bank last Thursday? Are you sure you haven't lost your mind?"

Southwest isn't relenting. It seems to believe this method of supreme annoyance will get me into its seats. A couple of weeks ago, I got this headline: "You left something behind: Manchester for $121." What I'm progressively leaving behind is my urge to ever fly Southwest again.

Shut up, I hear you say, all airlines do exactly this. They don't. Some don't pester all that much at all. And some -- and here I must be grateful that generally far less lovable airline, American -- don't question your sanity in the slightest.

American emailed me last week with: "Fares under $199 for summer travel."

That one I actually opened. I realized that few of these $199 fares would be to destinations I coveted, but at least the communication was honest and didn't try to tell me I was losing my marbles.

I wonder if American has flights to Charleston. I suddenly have the urge to go there.

Join Discussion for: Southwest Airlines keeps insulting me and...