Full Bio
Posted in Between the Lines on February 3, 2017 | Topic: Cloud 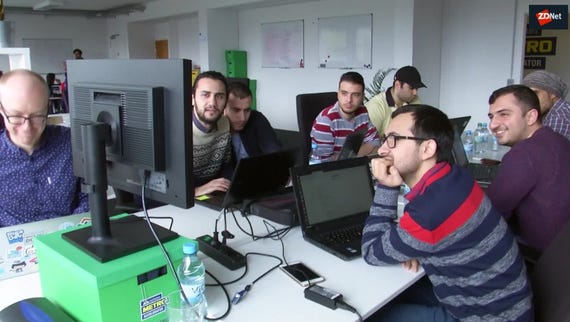 While analysts will fret about Amazon's e-commerce business and growth ahead, you need to realize that AWS is the profit engine. To wit:

Cloud Computing: Moving to IaaS Infrastructure as a Service providers make a very compelling argument for businesses to stop running their own data centers and simply purchase server capacity on-demand and scale up and down as needed. This is our deep dive on IaaS strategy and best practices

We feel we've got a very broad base of customers from startups to small medium businesses to large enterprises to the public sector. We are continuing to see strong growth across all those sectors. The business is now a $14 billion annualized run rate. We have been pretty clear that this business is all about creating new functionality for customers.

Here's a look at the standings among cloud giants.

Microsoft cited a commercial cloud annual run rate topping $14 billion. The catch? It's not easy to figure out what the run rate includes. Officially: Commercial cloud run rate is calculated by taking revenue from the last month of the quarter for Office 365 commercial, Azure, Dynamics 365, and other cloud properties and multiplying it by 12. Got that?

Nevertheless, Microsoft has a bunch of cloud assets that are combining to be a formidable unit. Microsoft is a clear rival to Amazon Web Services, but a different animal entirely. Microsoft Azure plugs into hybrid clouds well. It's not a big leap from products like Windows Server to Azure and Active Directory is almost like a cloud gateway drug. CEO Satya Nadella said:

Our commercial cloud annualized revenue run rate now exceeds $14 billion, and we are on track to achieve our goal of $20 billion in fiscal year 18.

Customers choose the Microsoft Cloud for the following reasons: They want a trusted, global, hyper-scale cloud provider that meets enterprise grade needs. They want hybrid support that is architected into the hyper-scale service as well as the cloud servers. They want higher level services to help build their own digital capability across IoT and Enterprise App development, advanced analytics, and AI capability. Moreover, and most importantly... CIOs, CSOs, BDMs and developers are all seeing the benefits from the operational consistency, productivity and security across their entire digital estate spanning Windows 10 cloud security & management, Office 365, Dynamics 365, Enterprise Mobility and Azure.

That take sounds swell, but I'd love to see Azure's actual sales a quarter and fiscal year broken down based on infrastructure-as-a-service. Transparency grade: C. Maybe.

Transparency grade: B. IBM gives you enough to work with to divine its cloud and Watson transition, but you have to follow the bouncing technology and marketing ball through the various divisions.

Google is cited as a cloud contender and key player in the market. And Google's Cloud Platform combined with apps and machine learning is a powerful notion. Yet, Google Cloud is mixed in with the other category when it comes to earnings.

Other revenue for Google in the fourth quarter was $3.4 billion, up 62 percent from a year ago. Google said it saw strong performance from hardware, Google Play, and Google Cloud.

In 2016, we made huge strides building out our product offerings across all areas of Google Cloud Platform or GCP. We routinely hear from customers that we have now moved well beyond table stakes, and we have truly differentiated offerings in four key areas, data analytics and machine learning, security and privacy, tools for application development, and the ability to create connected business platforms leveraging our recent acquisition of Apigee.

For 2016, Google's other category had revenue of $10.07 billion. We don't know what the split is between Play and Cloud and hardware. My guess is that Play accounts for the bulk of sales for now with a heavy dose of Google Apps. Transparency grade: D.

And the rest of the pack. Oracle for the six months ended November 30, reported total cloud revenue of $2 billion, up 11 percent from a year ago. Oracle breaks out software-, platform- and infrastructure-as a-service. Toss in NetSuite going forward and Oracle will be able to boast run rates along with the big guns. The transparency between the as-a-service flavors is welcome.

Join Discussion for: Stacking up the cloud vendors: AWS vs. Microsoft...