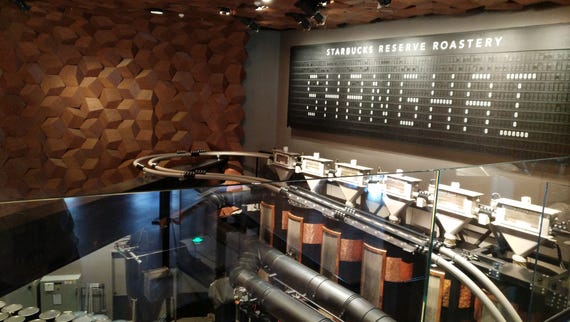 Starbucks and Alibaba last year announced a partnership that sees the coffee company leverage the Chinese giant's technology and ecommerce platforms to break into a market historically dominated by tea.

This ebook looks at the rise of e-commerce and the digital transformation of retail companies.

The first initiative under the partnership was the introduction of Alipay at Starbucks' bricks-and-mortar stores in China.

The companies then in December opened the Starbucks Shanghai Roastery, which boasts the title of the largest Starbucks in the world and the second Roastery the company opened following the flagship Seattle store.

The two-storey, 30,000 square foot Shanghai Roastery was the first facility to integrate a "real-time, in-store, and online customer experience", which is powered by Alibaba's Mobile Taobao app and augmented reality (AR) technology.

Alibaba's location-based tech knows when a Mobile Taobao app user walks through the door and serves the customer up a webpage that includes features such as a floor map and menus.

By turning on Mobile Taobao's AR function, customers can also scan the store for details of the coffee bars, brewing methods, and the roasting process. There's also a handful of game-like features centred mostly around the two-story copper cask that holds the coffee once it's been roasted.

The store even boasts a 3D-printed tea bar, which serves as the first Starbucks-branded Teavana bar in China.

Hosting journalists at its Shanghai store in the lead up to Alibaba's 2018 11:11 Global Shopping Festival, it was explained that China is Starbucks' fastest-growing market, with just over 3,000 stores in 136 cities -- 600 of those are in Shanghai.

The companies have also partnered under the Chinese giant's New Retail initiative which is aimed at taking the online shopping experience to bricks-and-mortar stores, including by launching a virtual Starbucks store, accessible via mobile.

Alibaba CEO Daniel Zhang said the two companies shared the same vision to pioneer a new coffee culture and lifestyle in China through innovation and technology.

"Alibaba is thrilled to expand our existing partnership with Starbucks by leveraging our cutting-edge New Retail infrastructure and digital power to enable an unprecedented experience for consumers," Zhang said in a statement. "This partnership is again a testament to the success of our New Retail strategy."

As of mid-October, Starbucks began offering a delivery service in nine new cities in China -- in addition to Shanghai and Beijing -- through Alibaba's on-demand delivery platform Ele.me.

Starbucks China CEO Belinda Wong said at the time she has plans to launch the service at more than 2,000 stores across 30 cities by the end of the year.

Also under the Alibaba-Starbucks partnership is the establishment of "Star Kitchens" in Alibaba's Hema supermarket.

Currently, Starbucks has piloted the kitchen in two Hema locations, one in Alibaba's Hangzhou headquarters and another in Baodi Mall in Shanghai. Starbucks said the plan is to roll out the service to more Chinese cities over time.

Disclosure: Asha Barbaschow travelled to 11.11 in Shanghai as a guest of Alibaba

Why Starbucks remains the mobile payment app leader ahead of Apple, Google, Samsung

Focus, value added and convenience are big reasons why Starbucks remains the mobile payment app leader based on eMarketer data. Here's a look at the bigger digital transformation picture.

It was a foregone conclusion that Amazon was going to kill retail. Now, your favorite coffee store is in its sights.

How retailers across the globe are undergoing digital transformation through personalization

Retailers, particularly those in the beauty sector such as L'OCCITANE en Provence, are using Qubit for personalization to increase sales and profitability.