Last year's launch of Windows 8 and the soon-to-be-released Surface Pro tablet are setting the company on a very different course to the one it has pursued in recent years, and will define its strategy for the next decade.

Even before it was launched, Microsoft executives were describing Windows 8 as a "generational change" in its operating system, the likes of which has not seen for nearly two decades.

"This gives them the new interface and the phone and tablet-centric view and sets them up to try to compete in those markets" — Michael Silver, Gartner

And you shouldn't dismiss this as merely the obligatory hyperbole that attends the debut of every operating system. Not only does Windows 8 feature a brand new user interface, there are also a number of significant, but less obvious, changes underneath the surface. In among them is the fact that Microsoft has decided its future lies down a more cloud-focused path.

The emphasis in Windows 8 is very strongly on the new touch-friendly interface (previously known as Metro). Such a change is a big gamble for Microsoft as it risks upsetting millions of customers who are used to the traditional Windows look and feel, especially as the new interface does take some getting used to.

But changing the look and feel of Windows - the absolute core of Microsoft's offering - is not undertaken lightly.

The change in interface shows Microsoft has taken its cues from the world of smartphones and tablets — largely because it has no other choice. Because, much faster than the PC industry ever believed, consumer (and to a lesser extent business) tech priorities have changed. 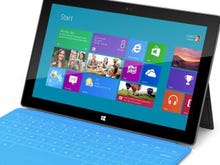 Microsoft Surface, the keyboard, and the big question tablets can't escape Most tablets are used for consuming content, not creating it — and while adding a keyboard fixes some of that, it brings with it even more challenges.

Rather than a mostly homogenous market as it was before, when both business and consumers would buy (variously specced) Windows PCs, the PC market is tearing apart.

Most obviously users can choose form factors (notebook, tablet, smartphone) and operating systems (Windows, Android, iOS) in a way that just wasn't possible until now. The busines market is less affected by the changes, for now, so Microsoft is trying to stay relevant and bridge the widening gap between consumer and business in two ways - with software (Windows 8) and hardware (Surface).

As Gartner research director Michael Silver highlights, this is because the PC no longer dominates the average user's technology experience. "A few years ago the PC was the heart of people's technology universe — now it's their phone or their tablet. We've seen PC sales slumping — the world is changing and Microsoft has no market share to speak of in the phone or tablet market.

"They need to change. This gives them the new interface and the phone and tablet-centric view and sets them up to try to compete in those markets. This is the beginning of the end of the old interface."

For Tony Cripps, principal analyst at Ovum, the new UI is bold but necessary move.

"Microsoft had to do something quite spectacularly different if it was to keep Windows relevant as a platform. We've been used to the Windows UI for a long time now and there hadn't been much in the way of evolution. The expectations that many people have of how computing devices work and how they interact with them is rather different to how they were two or three years ago.

Indeed, it could turn out that the new UI is one of the least controversial elements of Microsoft's plan. "Despite some unhappy users, Cripps says: "What I suspect will end up happening is it will be one of those things where, in a couple of years, no one will ever really remember not using it."

A new world of WinRT (and Windows RT)

But it's not just the interface that's different. Windows 8 is also part of transition from Win32 to Windows Runtime (WinRT) APIs and a new programming model. And longer term, that could be a much more fundamental change for developers and users than the interface update.

Surface tension: The long, strange history of the Windows tablet The launch of Surface Pro is Microsoft's most important attempt to build a tablet device. But the company has been trying to get this right for a long, long time.

Microsoft will certainly be hoping the nascent Windows Store could become a far more important software delivery mechanism as Windows 8 deployments increase — an app store on a grand scale (although it will need to improve significantly for that to happen).

As Simon Bisson points out elsewhere on ZDNet, the move to WinRT means the "heart of Windows future isn't the desktop ". Instead, WinRT is the first step towards a world of cloud apps, via Azure. Windows 8 is a transitional release, straddling Win32 and WinRT.

It might not be as radical a departure as Google's Chrome OS, which requires constant connectivity and points you towards apps that are solely cloud-based, but it's heading in the same general direction: towards a world of easier to use, easier to manage devices and appliances — much more the smartphone model than Microsoft's PC heritage.

"It will take quite a while for all your applications to show up in the new Windows Store interface, especially in business. Over time what you'll see is Microsoft continue to advocate writing new applications using the new tools in WinRT and eventually your software will get replaced with new WinRT versions of it," Gartner's Silver says.

Getting beneath the Surface of Microsoft's plans

Microsoft's ongoing hardware adventures, both with the Surface RT and the forthcoming Surface Pro, make sense as part of this broader strategy of managing the decline in PCs and the rise of bring your own device and the cloud.

"In a couple of years, no one will ever really remember not using it" — Tony Cripps, Ovum

Microsoft has already hinted that Surface is likely to be only the first of the devices it builds itself. Microsoft won the desktop operating system battle long ago but now the tech war has moved to a new arena, and  controlling the hardware and the app store are the ways to win.

Right now Apple is in pole position when it comes to tablets so Microsoft has been forced to take the unusual step of building its own hardware to make up for the lack of excitment in its hardware partners' offerings to date. The Surface RT is Microsoft's attempt to reach out to consumers and the BYOD brigade , while the Surface Pro is its attempt to bring enterprise-grade tablets to market. Microsoft needs to position Windows 8 as a plausible tablet operating system for both business and consumers to prevent the fragmentation which is occuring in the consumer PC space threatening its position in the enterprise, too.

But Microsoft's success here is by no means certain.

"The question is: can Microsoft capture the consumer market or part of it? Because Microsoft has really not been keeping up and losing mind-share, and has been big in business but even business is seeing the effect of consumerisation make in-roads into the decision-making process," says Silver.

And balancing all these competing pressures - the rise of tablets, cloud and BYOD - without alienating its core business audience is a challenge for Microsoft. If it goes too far down the route of consumerised products, it could risk its enterprise popularity, says Silver.

"The real problem is that as they look to consumerise some of these products they become less appropriate for the enterprise, so the space where they are strong, they start giving up.

"Microsoft has a great business supporting the enterprise and if they tilt too much towards the consumer, that's going to be another problem. Businesses are going to have to rethink their commitment and it really opens the door for Apple because if enterprises are dealing with a consumer product company... then why do they need to deal just with Microsoft?"

Join Discussion for: Surface Pro, Windows 8 and the rebirth of...