Technology and Commuting: Ford's 7,000 bike launch in San Francisco; Espin is a new spin on eBikes...

Bike-share networks are a missing link along the multi-mode commuting routes of millions of people and could potentially be a time-saver. I ran a test...
Written by Tom Foremski on July 3, 2017 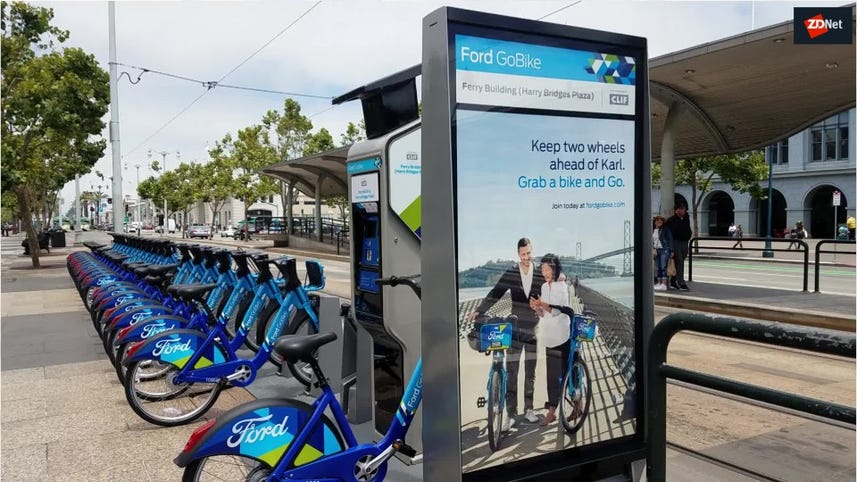 Ford GoBike, a co-venture from Ford Motor Company and Motivate, last week launched the first phase of what will be the second largest bike share network in the US with a goal of 7,000 bikes in San Francisco and the Bay Area from Oakland to San Jose.

The service costs $3 per trip and monthly and annual passes are available plus it works with the Clipper commuter card used by millions of people on local buses and trains.

It might seem strange to see Ford investing in bicycle sharing but the company sees it as a way of better understanding future transportation needs. Last year it acquired San Francisco based Chariot, which provides short route on-demand commuter services.

Ford is the sponsor but the heavy lifting is done by Motivate, a fascinating startup based in New York, which designs, builds and operates bike networks in nine cities and counting. The largest bike share network is in New York with 10,000 CitiBikes.

Motivate does far more than a typical Silicon Valley software startup. It not only develops the mobile app that users need to find and unlock bikes but also installs; thousands of bike stations; while dealing with city permits; and it also designs its bikes -- the San Francisco bicycles are made lighter and with gear ratios for the city's hills.

Ford GoBike is aimed at the commuter: all trips have to be under 30 minutes; and the bike stations are located close to public transport. Building the outlying bike stations quickly is the challenge.

My Test Ride of Ford GoBike

It's tough for me to get across town to San Francisco's CalTrain station without at least two buses so I was glad I had an alternative using the Ford GoBike service.

About a week ago I downloaded the app to my iPhone and it showed several bike stations close to my apartment.

It was the day after the official launch of Ford GoBike and I had to get to the Mission Bay district of San Francisco so this would be a perfect test of a multi-mode bus, bike, light rail and/or car-share route now made possibly faster.

I fired up the Motivate app but was disappointed there were no nearby bike stations operational yet. But there were plenty of bikes at the downtown stations.

I jumped on a bus downtown and walked a few blocks to find a bike station. No problem unlocking the bike with my Clipper card. Bike seat was very easy to adjust and the radial gear change was easy to operate.

I headed over to CalTrain from 5th and Market but riding crosstown in San Francisco is not for the feint of heart. Roadworks and heavy traffic make space tight on the bike routes.

Arriving at the Caltrain station took about one-third of the time it would have taken by waiting for a bus but I had a problem: no where to park the bike there were just four bike slots and each was full. Fortunately, someone unlocked one of the bikes so I was able to park and lock mine.

There was a crew of workers installing several dozen more bike slots. I stopped and chatted with them and they were very friendly. They said a lack of city permits were holding them back in some neighborhoods. I told them I liked the service so far based on one trip!

I've lost plenty of bicycles to theft over the years. Bike share networks outsource that risk for a very small price.

Public transport commutes are vulnerable to missed connections. It's here that a bike share network can make a huge difference to people's commute times.

However, riding is not easy or safe on the streets of San Francisco. The city pulled down its elevated crosstown freeways after the 1989 Loma Prieta earthquake forcing traffic onto the streets. This makes for very crowded roads at commute times and makes it more dangerous for cyclists -- potentially discouraging the use of Ford GoBikes.

I recently had a chance to use a pedal-assisted electric bicycle made by a Bay Area company Espin, founded by husband and wife Josh Lam and Yina Liu, and I really liked it. Motivate should use these bikes!

The bike is large and heavy at about 50 pounds but with the pedal assist electric power boost they feel as light as a feather when riding.

This was my first time on such a bike and for about four days I rode it through some rugged urban terrain and along hard-to-pedal tidal beaches and came away very impressed.

I liked the fact that you have to pedal and that there is no free ride. If you stop pedaling the power assist stops dead so it's a very natural way of operating the bike.

The gears are selected as normal from the right handlebar while the left side selects five levels of power assist. Downshifting requires selections from both sides of the handlebar which takes a little practice.

The range is 25 to 50 miles from a powerful electric motor inside the back wheel and a lockable lithium ion battery. Commuters have been buying the bikes but also it's popular among gig workers for delivering food and packages.

The bike can quickly reach 20 to 25mph which builds a lot of momentum but with the excellent stopping power of the disk brakes I had no problem staying comfortably in control.

The Espin bike is a wonderful way to get around a city. The assisted power will take you from a stop to a fast start so there's less temptation to roll through stop signs.

It won't take you up every hill but you can get off and put it in "P" mode which moves the bike at 3.7mph so if you are walking the bike it will pull you slightly forward -- very useful for the steepest hills.

And you can get places very fast. At 20 to 25 miles per hour you are moving faster than than the average speed of a bus in San Francisco at 8mph, or car at 12mph. Plus you arrive sweat-free which is important.

However, if you want a good hot work-out headed home you can simply switch off the assist. And these bikes are great off-commute, too. With one of these I could keep up with my sportier friends.

Josh Lam says the Espin bikes are less expensive than many other similar bikes because they source their own components and design. The price is $1888 and gig delivery workers get a $400 discount.

Espin is a great choice if this is can be your only way to get to work but for a patchwork commute that's typical of the Bay Area Ford's bike share could be a more practical choice because you don't have to worry about theft.

But until Motivate builds out the next phase of the San Francisco network current downtown areas are of little use because they are the destination for many commuters. It will require building bike stations in the inner and outer residential neighborhoods of the city (especially around Divisadero and Eddy! :) to test its promise.