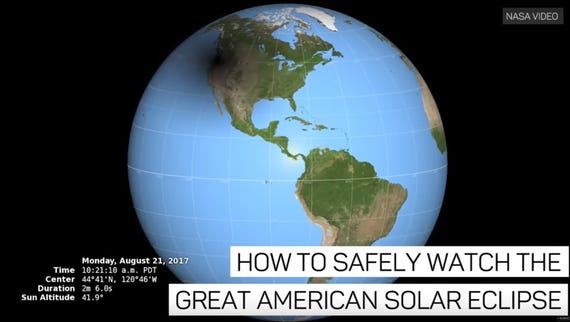 (This article was originally published on CBSNEWS.com.)

Watch the solar eclipse of the century: When, where, and how

The total solar eclipse on August 21 will be the first time in 99 years that one will traverse the US from coast to coast. But, it can also be dangerous to view. Here's how to watch safely.

For eclipse enthusiasts, amateur astronomers and those with just a passing interest in the Aug. 21 coast-to-coast solar eclipse, look no further than your web browser or smartphone to learn how to make the most of this rare and spectacular event.

Eclipse Safari is from the makers of Sky Safari, one of the leading astronomy programs for computers, tablets and smartphones. Sky Safari code also powers the same interactive map and planetarium view used by the Smithsonian app.

The well-engineered Eclipse Safari features a news feed from Space.com, realtime eclipse updates and will play NASA's livestream during the actual eclipse, showing realtime views from various sites across the nation.

Most useful, the app features a zoomable map of the United States, showing the eclipse path of totality, that lets the user specify a viewing location, either manually or using the phone's GPS.

Eclipse Safari includes a well-designed interactive map that lets the user, or a smartphone's GPS, select a viewing site for the Aug. 21 solar eclipse. The app will then generate a table showing when the eclipse begins at that location, when it reaches maximum and when it ends. Click on the "view" button to see the sun and moon in the sky as seen from that location.

Click anywhere on the map and it will show you when the eclipse begins and ends at your location, the duration of totality and even a countdown clock showing when the moon's inner shadow, or umbra, will reach you if you're in the 70-mile-wide path of totality.

If you're not in the path of totality, the app will show when a partial eclipse begins at your location, when it will reach maximum and when it will end. Everywhere in the United States, Canada, Central America and northern South America will see at least a partial solar eclipse.

The Smithsonian's app uses the same Sky Safari-driven map and sky view and includes the NASA TV livestream, along with recent images of the sun taken by NASA's Solar Dynamics Observatory satellite.

Both apps will draw the sun and moon as they will appear in the user's sky on the day of the eclipse. But the Sky Safari planetarium code, running on a remote server, draws the sky as it appears in daylight and the glare of the sun tends to drown out the moon.

In Sky Safari's desktop and pro astronomy apps, the user can "turn off" daylight, making the sun and moon much easier to see against a dark sky. That's not an option in the Sky Safari-driven smartphone apps, but it is in Redshift's Solar Eclipse.

As with Eclipse Safari, the Redshift app allows the user to pick an observing site anywhere in the United States (or use your phone's GPS to pinpoint it for you), instantly generating a table showing when the eclipse starts and stops at that location.

The interactive map is not as useful as the one in the Sky Safari-driven apps because it includes far fewer towns and cities and the dark colors of the display make the path of totality difficult to make out in zoomed-in views.

But the sky scenes showing sun and moon are clearly superior. The user can pull up a scroll bar to move time forward and backward in small increments and turn daylight on or off. The result is a much more attractive rendering, at least to this user. It's not necessary for planning purposes, but it's a huge help when it comes to visualizing the eclipse.

Solar Eclipse by Redshift provides well-rendered sky views of the eclipse as seen from any location. Drag the slider at the bottom of the screen to watch the moon move across the sun at user-defined intervals.

Another extremely useful feature of Redshift's eclipse app is its promised ability to show the weather at the user's location. The app says this feature will become active five days before the eclipse.

The web, of course, offers a wide variety of sites with useful maps, tips, viewing guides and other resources.