I've been using the Internet since the 80s. To me, Internet applications were programs most of you have never heard of such as Archie, Gopher, and Veronica. Then, along came the Web, and everything changed.

I was the first writer to cover the Web for a popular audience, and it did prove popular. I mean, it must have had hundreds of thousands of users in 1993! Today, Facebook alone has over a billion users.

You see the problem was that it was really, really hard to use the Web in the early days. Unix was the only operating system with real Internet support. If you wanted to use Windows 3.1 to connect to the Web you needed to use a program called Trumpet Winsock. It was an incredible pain-in-the-rump to set up properly.

Just getting an Internet connection was a major headache. There were very few ISPs in the early 90s. And, even if you did have a connection, you would be lucky to have a "fast' V.32bis 28.8Kbps connection. And those early Web browsers, such as Lynx and WWW well not as much a pain in the rump to use as Winsock were anything but easy.

Say hello to the early days of web browsers (gallery)

Then in early 1993 National Center for Supercomputing Applications at the University of Illinois at Urbana-Champaign's came out with Mosaic, the first popular graphical Web browser . Mosaic was a big step forward, but it still was a program that only techies could love.

But, then Mosaic's inventors, Marc Andreessen, went out to build the one of the first commercial Web browsers, Netscape. This Web browser, which was available for Windows, Mac and Unix's X Window System would change everything. Now anyone who could manage to get an Internet connection, which still wasn't easy, could use the Web without blood, sweat, and tears.

Netscape was more than just a browser. The Internet as we now know it sprang into existence from Netscape innovations, such as RSS feeds and dynamic JavaScript-powered Web pages. By the time Netscape entered the stock market in 1995, it went from a startup to a billion dollar company at a rate that had almost never been seen before.

For a few fleeting years, Netscape dominated the Internet. It wouldn't last. 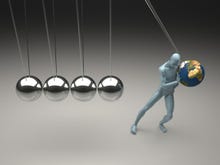 Six clicks: Can your browser do these tricks? All web browsers are not created equal. Each of the top six browsers has a unique killer feature.

Microsoft, which had been caught flat-footed by the Internet's popularity, played catch-up. Microsoft first browser, Internet Explorer 1.0, was based on the Spyglass variant of Mosaic, and it was, frankly, not much good. With Netscape then owning 80 percent of the Web browser market, Microsoft decided to win by any and all means.

In a little known side note to computing history, Spyglass had foolishly signed a contract that got revenue from IE sales. Microsoft claimed that since IE was both free and part of the operating system, it didn't owe Spyglass a dime.

Both Netscape and Spyglass sued Microsoft. Both won. Neither victory mattered. Ironically Spyglass's stockholders managed to get rich by one of the most preposterous deals in tech history. Even though the company had little left of any value, somehow OpenTV fooled itself into thinking there would be a huge market for TV set-top devices... in 2000. So, OpenTV paid $2.5 billion for a worthless company.  There's a reason why you've never heard of OpenTV and there you have it.

True, the Department of Justice ended up investigating Microsoft on antitrust grounds because of its actions against Netscape. In the end, Netscape "won," but it was too late. In 1999, after Judge Thomas Penfield Jackson ruled that  Microsoft had acted as an illegal monopoly , Netscape has been crushed by Microsoft. IE had become the dominant Web browser and Netscape was on its way to becoming history.

Jackson's decision would later be watered down and Microsoft would get off with a slap on the wrist. Netscape stumbled on, but it was dying.

Netscape tried open-sourcing its code. From Netscape's code Firefox would appear, but that wouldn't help Netscape the businesss. As  Jamie Zawinski, an early Netscape employee, said in 2000, "You can't take a dying project, sprinkle it with the magic pixie dust of 'open source,' and have everything magically work out."

Netscape ended up in AOL's hands . At the time, people saw it a major move and a chance for Netscape to emerge triumphant. Instead, Netscape went into its death spiral.

Today, most Internet users have never heard of Netscape. That's a pity because it really was the single most important program for bring the Web to the people. It was nice knowing you Netscape, some of us still miss you.

Join Discussion for: The beginning of the people's Web: 20 years...