The Groundswell of Social Media Backlash

There appears to be a fully fledged backlash against 'social media' marketing emerging, with commentary in both areas you'd expect and in places you might not.This is tough on the people who have solid foundations for what marketing messaging is all about, and who are doing good things with modern technologies around the age old concepts of marketing 'conversations' or word of mouth.
Written by Oliver Marks, Contributor on May 23, 2009

There appears to be a fully fledged backlash against 'social media' marketing emerging, with commentary in both areas you'd expect and in places you might not.

This is tough on the people who have solid foundations for what marketing messaging is all about, and who are doing good things with modern technologies around the age old concepts of marketing 'conversations' or word of mouth.

"A powerful global conversation has begun. Through the Internet, people are discovering and inventing new ways to share relevant knowledge with blinding speed. As a direct result, markets are getting smarter—and getting smarter faster than most companies."

The ClueTrain Manifesto was written in the era of email and mailing lists, news groups, chat/instant messaging and of course Web Pages (it was conceived during the height of the dot com boom).

What it promised was a free 'Whopper' hamburger to anyone in the USA on Facebook who would “sacrifice” (ditch, dump, de-friend) 10 Facebook friends.

All you had to do, via the (Facebook) application, was tell Burger King which ten friends you were dumping, and you received a coupon for a free Whopper. Your ten former friends then received notices that they were dumped (unlike normal Facebook “de-friending” which occurs without notification to the dumpee).

The idea itself caused a minor uproar, with some taking real offense to the less than amicable Burger King concept. Apparently, unloading 10 friends (whom you could quickly “re-friend” the next day) for a free burger is not just anti-social, it’s un-American and perhaps immoral as well.

There you have the perfect ark, from visionary manifesto to ironic of-the-moment commercial lampooning of Social Media, with all its sociological pretensions,

There's a parallel here with 'the desktop publishing revolution' which empowered amateurs with professional design tools and spawned some of the worst typographic design disasters of the last century. Wikipedia:

<>Desktop publishing began in 1985 with the introduction of MacPublisher, the first WYSIWYG layout program, which ran on the original 128K Macintosh computer. (Desktop typesetting, with only limited page makeup facilities, had arrived in 1978-9 with the introduction of TeX, and was extended in the early 1980s by LaTeX.) The DTP market exploded in 1985 with the introduction in January of the Apple LaserWriter printer, and later in July with the introduction of PageMaker software from Aldus which rapidly became the DTP industry standard software. The ability to create WYSIWYG page layouts on screen and then print pages at crisp 300 dpi resolution was revolutionary for both the typesetting industry and the personal computer industry. Newspapers and other print publications made the move to DTP-based programs from older layout systems like Atex and other such programs in the early 1980s.<>

What desktop publishing enabled was the decimation of the typesetting business and huge price pressure on the design profession. For those not able to differentiate between good design and multi typeface monstrosities these were good times, client and practitioner alike, and of course plenty of talented graphic designers were able to adapt to the then relatively crude new tools.

Over time it became possible to apply the design excellence of centuries of print design best practice thanks to increasingly sophisticated electronic tool design, but of course a toolkit doesn't make a craftsman. Just purchasing a set of tools doesn't imbue you with design skills any more than buying wrenches enables you to fix an engine...

Back to Social Media: the evangelizing book Groundswell's co author Josh Bernoff says 'Let's talk about tampons' this week, specifically citing the success of a website called beinggirl.com P&G started way back in 2000, which was created to communicate with pubescent girls about the value of P&G feminine hygiene products.

From Advertising Age back in July 2000:

P&G last week launched BeingGirl.com, a site that mixes online sampling and product pitches for its Always and Tampax brands with interactive features such as health advice, whimsical dancing tampons and a Ms. Period Face feature that lets girls create images of how they feel during menstruation.

Josh's employer Forrester sells a report by Lisa Bradner for US $749 on how this approach 'Builds Lasting Brand Loyalty', presumably over the whole nine years the site has existed.

Burger King and its agency, Crispin Porter + Bogusky, knew what they were doing from a marketing strategy perspective with their 'whopper sacrifice' campaign, just as Procter & Gamble's marketing experts were well ahead of the game with their tampon sponsored online girls magazine. 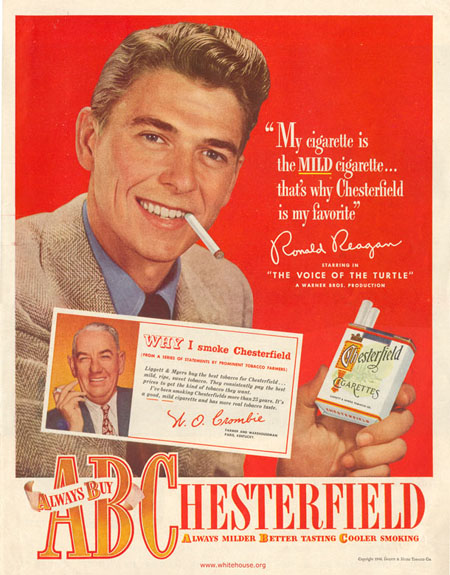 The video montage at the top of this post and this early '50's Ronald Reagan cigarette magazine advertisement illustrates an earlier era's perception of conversation with their audience.

When television was a new medium programming was announced, often by a celebrity, as being 'brought to you by' a sponsor. This approach lasted until the mid seventies when branding became a lot more sophisticated.

If 'social media' really is a new medium, a new way of selling people stuff through joining conversations about shared consumer knowledge, the sheer number of amateur practitioners offering training in these skills is starting to get discredited and questioned a lot.

This isn't good for anyone, whether the P&G tampon marketers, the Burger King creatives or any other above the line branding or below the line promotions people. It's particularly bad for internal collaboration efforts, as I've written previously, because the sheer noise around these social media marketing efforts slops over and can negatively color perceptions of what internal collaboration networks are.

The awkward 'brought to you by' conversational tone of past generations of TV is increasingly being mirrored by 'trying too hard' social media mavens butting into conversations within social media technologies. I'm not even going to address the nonsense being peddled under the rubric 'branding' recently.

I wonder how hokey some of this stuff is going to look a few years from now...and to many people it's becoming increasingly annoying now....

The developer role is changing radically, and these figures show how