Imagine a computer network when you can connect with thousands of other users, can play multiplayer games, chat online and share information across the world, explore complex documents that link between pages and between different elements of content – all on terminals with local memory and high resolution touch displays. 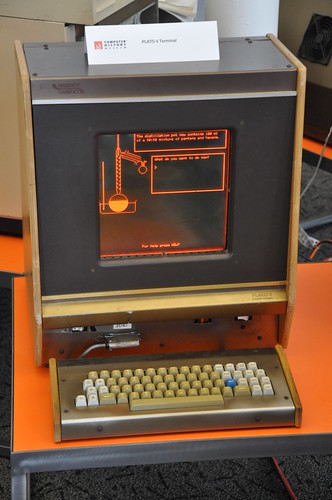 Ten years before the PC, and nearly 30 before the consumer Internet, the University of Illinois’ PLATO laid the foundations for most of the modern computing world, innovating in a unique “can-do” culture and inspiring many folk who would go on to deliver PLATO-inspired software.

With the first PLATO systems up and running in 1969, it seems apt to celebrate a nearly forgotten – yet extremely influential - piece of computing history. So, while we were in Silicon Valley we dropped in on the PLATO@50 event at the Computer History Museum. A celebration of the PLATO project, it covered the project's history, its technology, and its people.

Started as an attempt to develop and deliver educational computing tools, PLATO revolutionised the time-sharing world, bringing computing to the desks of students and staff. PLATO was designed to overcome the limitations of the early mainframes (with the first terminals running off the venerable ILIAC 1 supercomputer), and it let users move away from piles of printouts, punch cards and paper tapes, onto high resolution plasma displays. The development of the first practical plasma display was one of the keys to PLATO, as it could be used to remove the requirement for large amounts of video memory – keeping hardware costs down. 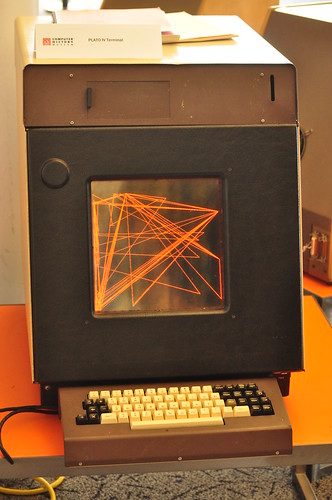 PLATO was also one of the first touch computing environments. Infrared arrays around the screen let users interact directly with applications, something the team thought important for the free-form educational environment PLATO provided. The choice of touch was the subject of some debate between Don Bitzer's PLATO team and Doug Engelbart's team of engineers at Xerox PARC, with their embryonic mouse – a good natured disagreement that continues to this day (and Bitzer is pleased by the advent of touch-powered appliance devices like the iPad…).

Underneath PLATO was the TUTOR language, what we'd now think of as a domain-specific scripting language with limited hypertext capabilities. With tools for creating images, building problem sets and with regular expression-like features for handling answers, it could be used by any teacher to build online lessons (and one of the early success was actually a set of Latin lessons), which could then become part of PLATO's library of online teaching materials.

But as William Gibson pointed out, the street finds its own uses for technology. While PLATO is perhaps now best remembered for its pioneering online social community, built around its notes application and real-time chat tool, it was also a pioneering games platform. Microsoft's Flight Simulator had its inspiration in PLATO's Air Fight game, and the Empire space war simulator turned into an online community with tournaments and even marriages…

PLATO's real inheritance is the people and the applications it inspired. One of the students who worked on the project was the young Ray Ozzie, tempted into a lab by the friendly orange glow of the terminals’ plasma screens. He quickly became a programmer, developing tools for the system, and exploring the Notes application (what could have been the first social network). It was PLATO Notes that led to Lotus Notes and Groove Networks, to Ozzie’s role as Microsoft’s chief software architect, and it was PLATO's culture that led to the structure of Ozzie’s FUSE Labs social software research team at Microsoft.

Even though I only touched my first PLATO terminal at the conference, it's something that's touched my life too. I first read of it in a 1970's National Geographic, but it was only when a school-friend leant me a battered copy of Ted Nelson's original self-published Dream Machines that I really learnt what PLATO was, and what it could mean. It probably wasn't surprising that when the web came along in the early 90s, I quickly moved from hardware engineering and big radios into networks and hypermedia….

It's hard to compress an event like PLATO@50 into a few hundred words. It was a celebration of something that gave birth to much of our industry – yet it's one that far too few know. Perhaps it's time we all should raise a glass to that friendly orange glow, and remember the legacy of PLATO.