The rumour that HTC might launch a new "vanilla" version the HTC One that uses stock Android instead of its Sense 5 UI refuses to die, but I just can't work out why.

In lots of situations, I’d be one of the first to agree that a Google Edition of many handsets would've been a good idea, but with the HTC One , I can't agree.

There are plenty of advantages to running a stock version of Android for manufacturers and buyers, just one of which is that you’ll likely get future software updates sooner than manufacturer or network-tweaked versions (although it's still not a guaranteed thing).

Even if it was the case, some handsets just work better with a UI tweak here and a vendor specific app or service there. And in my eyes, the HTC One is one of those rare phones.

I don't tend to be a huge fan of superfluous OS elements or gimmicky features that you know you’ll use once and then forget about, but in the limited time I got to spend with the HTC One, it was the flourishes that made it enjoyable, that made it stand out at all.

HTC itself is staying quiet and only had the usual "no comment on rumours or speculation" to say about the existence of such a device, but if it was about to announce the One Google Edition, it would be a mistake, at least as far as I'm concerned.

Sure, Samsung has confirmed it will do a stock version of the Galaxy S4 , so it might seem logical to think that HTC would want to compete on those terms too. But at a time when it has just scored a hit handset, I can't imagine why it would want to project the image that all the changes it made to the UI actually made the phone worse rather than better.

And at a point where hardware makers are struggling to make their devices stand out on hardware alone to let your flagship handset do just that will be hard. 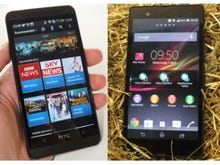 Hands on with HTC and Sony's high end smartphones; which one will have the edge?

As it is, in order to combat the smartphone market's hardware inertia mobile makers are turning to software differentiation to stand out — notably, Samsung making the biggest splash with its TouchWiz-equipped Galaxy S series and Nokia gaining some attention for its Music and Mapping services on the Windows Phone front.

In the past, HTC has made stock and Sense-equipped handsets but it’s only with its most recent version that the UI has really seemed worth having, and now it could be about to pull it off its most interesting handset in years.

HTC has just posted a more-than 35 percent slump in sales for its first quarter 2013 results — part of which is down to difficulties it has had in getting the One into the hands of wannabe buyers. In real terms, its profits for Q1 were down 98 percent .

What I’d suggest it doesn’t need now, given that the handset itself is decent and received good reviews almost universally, is to confuse its overall line up. It's also worth noting that one of the only factors that could make a Sense-less HTC One a success is a retail price far below the HTC One, which would obviously cannibalise sales of the original handset.

The line up as a whole over the last couple of years has seen little in terms of revolution, but plenty of iteration, with its handset strategy seeming to be aligned around "trendy" partnerships with brands or individuals such as Dr Dre's Beats headphones or Facebook for the HTC First, whereas what is required is consistent perfomance and an element of surprise.

That's what Samsung offered when it started adding features to the S and Note series, and now they are among the most successful smartphone ranges of all time.

HTC’s problem, for me at least, has been too many middle of the road devices (some high-end spec-wise, but not particularly remarkable in a hardware sense).

Quite why it would want to compound this problem at a time when it has just ramped up production of its new hero handset — that people seem to quite like — is something I just can’t quite wrap my head around.

Join Discussion for: The HTC One Google Edition? A Sense-less...