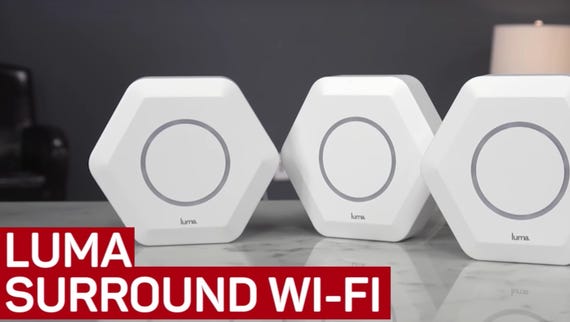 Wi-Fi is essential. For most small offices/home offices (SOHO), a high-end router such as the LinkSys WRT3200 ACM is all you need. For large home offices, Ethernet or powerline-networking will work well. But, if you're working out of an older building or you're sharing your power with other businesses, neither of those may work well. In that case you need mesh networking and a mesh networking product such as the Ubiquiti Amplifi HD Home Wi-Fi System.

In my case, a friend was running a small accounting business from her home office in a house dating from the early 1900s. With its 3,500 square feet, two floors of heavy wooden construction, and outdated electrical wiring, it was completely unsuited for single access point (AP) Wi-Fi or powerline networking. It was, however, a perfect place for mesh networking.

Mesh networking uses multiple Wi-Fi stations, which work together to cover every corner of your office with a strong Wi-Fi connection. The Amplifi, like all mesh network devices, does this by using the IEEE 802.11s standard.

Unlike the Wi-Fi standards you already know such as 802.11b/g/n/ac, 802.11s doesn't define how to transmit and receive data. It works on top of the Wi-Fi data transmission protocols to define the architecture and protocol it needs to get multiple devices to work in harmony. 802.11s uses the Hybrid Wireless Mesh Protocol (HWMP) to define how data is routed from one device to another and eventually to the internet.

You don't need to know the technology to use the Amplifi HD. It comes with a dual 2.4 and 5GHz band router cube and two mesh points, which plug into any power outlet. It's essentially a plug and play Wi-Fi solution. Once powered up, you install, manage, and monitor it using an Android or iOS mobile app.

This installation is mindlessly simple. I just connected the Amplifi HD to the main office PC and the cable modem. Then I "installed" it by opening the app and tapping the Set Up Amplifi button. That was it. If you don't have a smartphone, you can also set it up using a web browser.

Besides Wi-Fi, the router has four Gigabit LAN ports, a WAN port, and a USB 2.0 port that is reserved for future use.

Once I'd named the router and given it a Wi-Fi password, setting up the the mesh points was even easier. I simply placed them in two rooms about 30 feet from the router. Their blue LED lights flashed for about a minute and then the devices chimed and their LEDs turned a solid blue. That was it.

The Amplifi HD uses half-a-dozen high-density but invisible long-range antennas. Ubiquiti claims it can cover up to 20,000 square feet with theoretical speeds of up to 5.25 gigabits per second (Gbps) using all three access points at once.

Like all Wi-Fi devices, the Amplifi HD doesn't go as fast as its manufacturer claims. But, at 30 feet, and with a wall in the way, the Amplifi HD's 2.4GHz throughput of 75 megabits per second (Mbps) and 5GHz's 225Mbps blew away the 100Mbps I was getting from an older 802.11n Wi-Fi access point (AP). In addition, the signal strength more than doubled.

In short, the Amplifi HD made Wi-Fi usable throughout the building. Before it, Wi-Fi was only really usable in the main office room.

The Amplifi HD also features band steering. This automatically picks the best Wi-Fi channel depending on traffic load and location. The Amplifi HD also enables you to set separate SSIDs for both the 2.4 and 5Ghz radio band. This makes managing network traffic easier.

Curiously, while an April firmware update gives it simple Quality of Service (QoS), this only works for Wi-Fi clients. If you want more control, the Advanced Wireless settings enable you to select which channels to use and their channel width.

The Amplifi HD has a list price of $349.99, but you can usually find it for a bit less. Even at full price, I've found it to be worth the money. If you have an older building and conventional Wi-Fi isn't cutting it, I highly recommend the Amplifi HD.